Western banks are moving out of Africa’s banking business, as they are unable to remain competitive in the continent’s challenging environment. Barclays Africa announced the sale of its African business in March 2016. Old Mutual has plans in place to reduce its 55% stake in South Africa’s Nedbank to a minority. Citi, HSBC, Société Générale, and BNP Paribas also laid out plans to exit their African retail operations. Most of these announcements came last year when the region was facing an economic slowdown due to a commodity crash resulted in credit costs being elevated.

However, in the past year, the banking sector has turned a corner as oil prices have stabilized and credit costs have declined. Bank stocks in Africa have recovered and regional banks in Morocco, Nigeria and South Africa are once again in expansion mode, while western financial institutions are downsizing their operations globally as part of their cost-cutting efforts.

With foreign banks losing out, domestic banks are expanding their share of the pie by acquiring customers and assets from foreign banks. 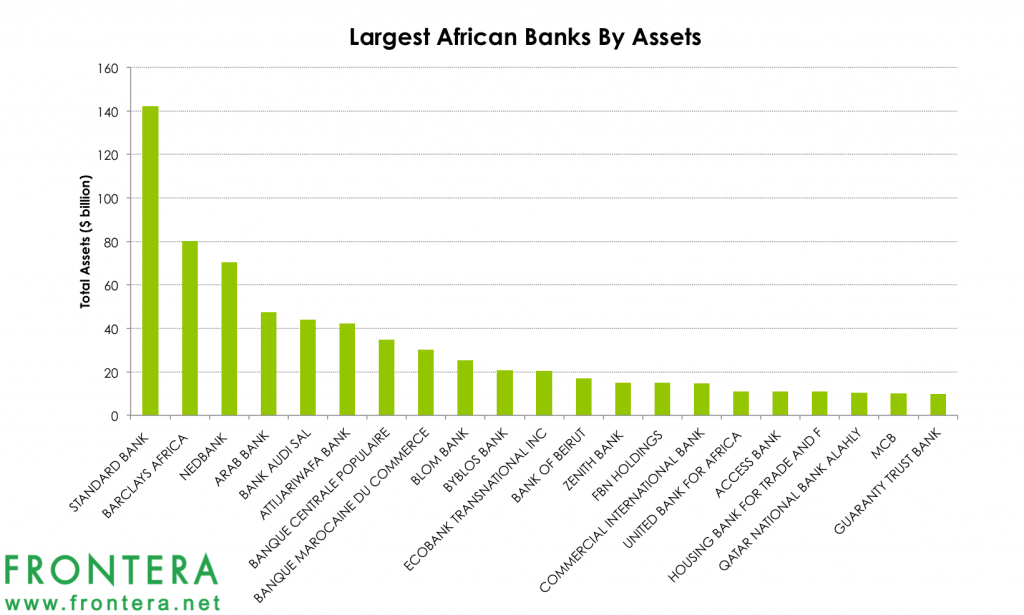 Some of the largest African banks by assets are South Africa’s Standard Bank Group, Morocco’s Attijariwafa Bank, Egypt’s Commercial International Bank, and Nigeria’s Guaranty Trust Bank. In 2016, these banks reported assets of $143 billion, $42 billion, $14.8 billion and $9.8 billion respectively. Year to date, shares of these banks have returned 9.6%, 14.9%, 6.6%, and 70% respectively. 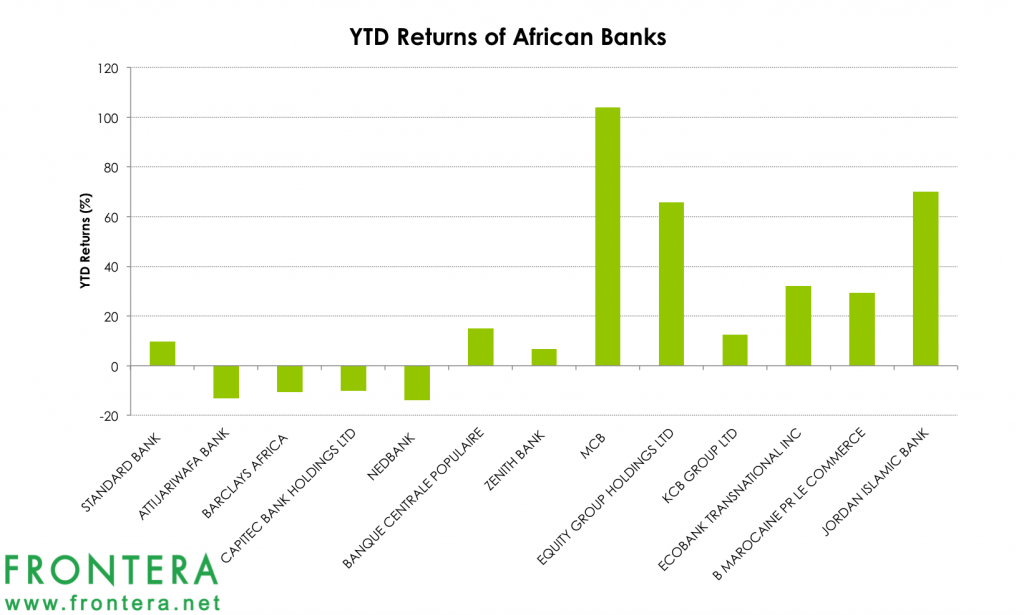 South Africa based Standard Bank is the largest African bank by assets as well as market capitalization. In 2016 the bank reported assets of $142 billion, loans of $67 billion and deposits of $79 billion. 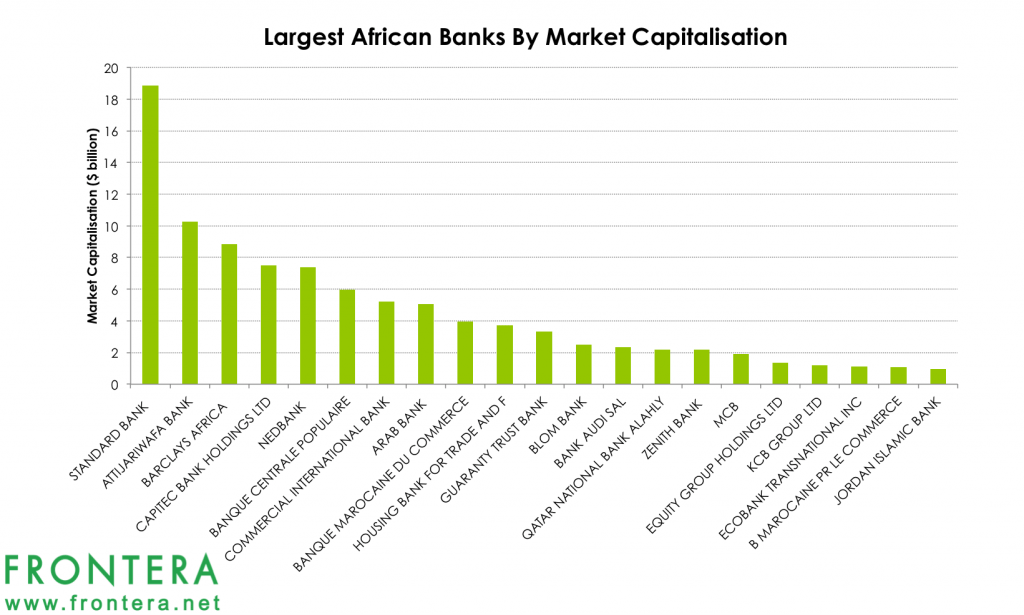 Standard Bank currently operates in 20 countries across the African continent. Recently, the bank expanded its operations in Côte d’Ivoire as part of its expansion plans.

Sola David-Borha, the Nigerian chief executive for Standard Bank’s rest-of-Africa business shared a bullish view on Africa’s growth even as international banks pull back, “As Africa becomes more challenging, you’ve seen international banks pull back and lose interest. Standard Bank has done the opposite – continued its focus on Africa,” she said. This optimism comes despite the fact that banks in South Africa are being downgraded by credit rating agencies. Overall, South African banks are currently attractively priced and can provide outsized returns to investors. 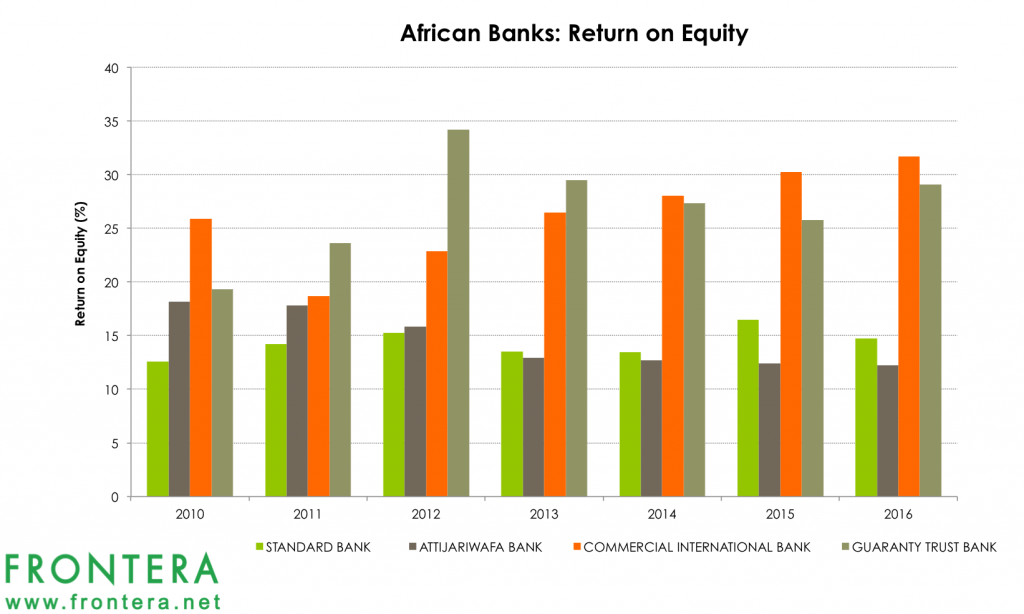 Standard Bank’s shares trade on the Johannesburg, Stuttgart and Frankfurt Stock Exchanges with tickers SBK.JO, SKC2.SG and SKC2.F. The bank also trades on the OTC Markets with ticker SGBLY. The bank’s Johannesburg listed shares have surged 9.6% in 2017 thus far.

Morocco-based Attijariwafa Bank, North Africa’s biggest bank, is also the sixth largest African bank by assets. In 2016 the bank reported assets of $42 billion, loans of $28.3 billion and deposits of $28.3 billion. 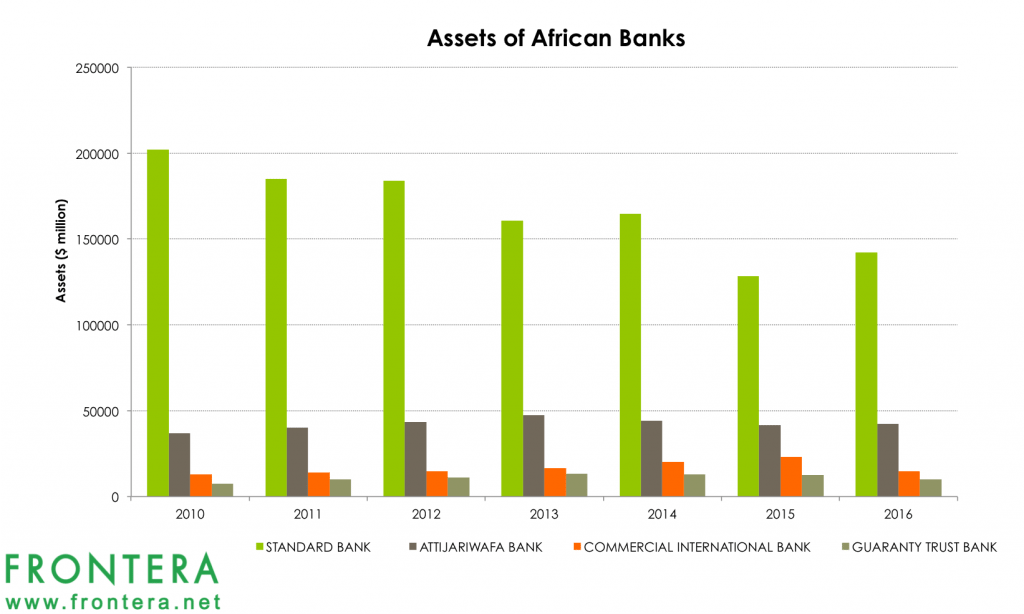 The bank was established in 2005 as a result of a domestic merger between Banque Commerciale du Maroc and Wafabank. Currently headquartered in Casablanca, it is also part of King Mohammed VI’s holding company the SNI.

In 2008, the bank bought Credit Agricole’s retail business in Western Africa to expand its international presence. The lender is now considering expansion outside of francophone Africa with the acquisition of Barclays Egypt. The company is also in the process of negotiating with banks in Ghana and Nigeria. Additionally, Attijariwafa is considering a potential acquisition of Cogebanque in Rwanda as a way to venture into east Africa.
In 2016, it generated revenues of $3.3 billion and net interest margins of 2.9%. In the same year, the bank reported return on assets of 1.1% and return on equity of 12.2%. 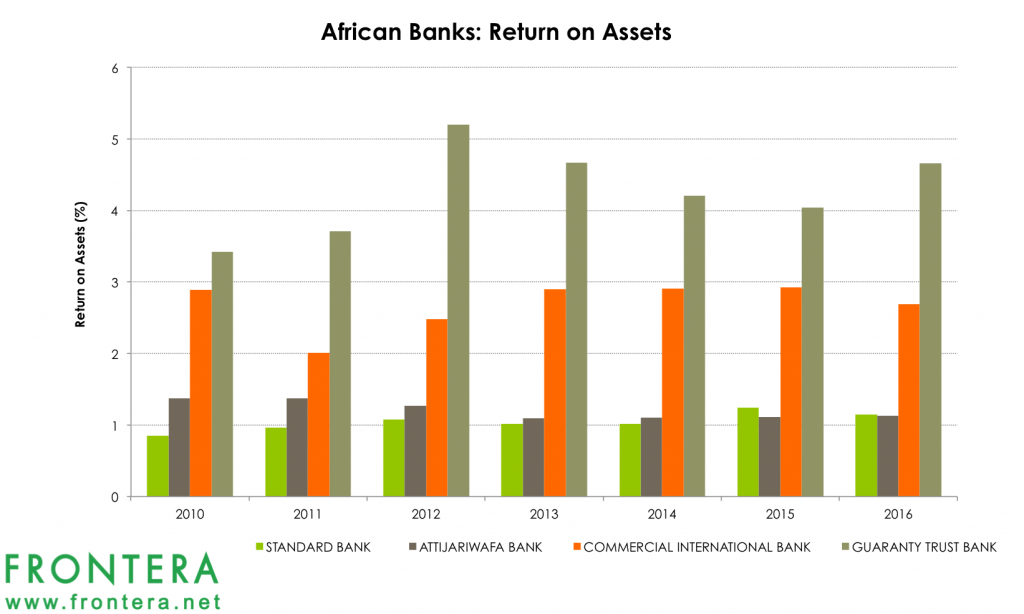 Commercial International Bank is Egypt’s largest private sector bank. It is also largest listed company by market cap in Egypt with a market value of $5.2 billion, and total assets of $14.8 billion in 2016. 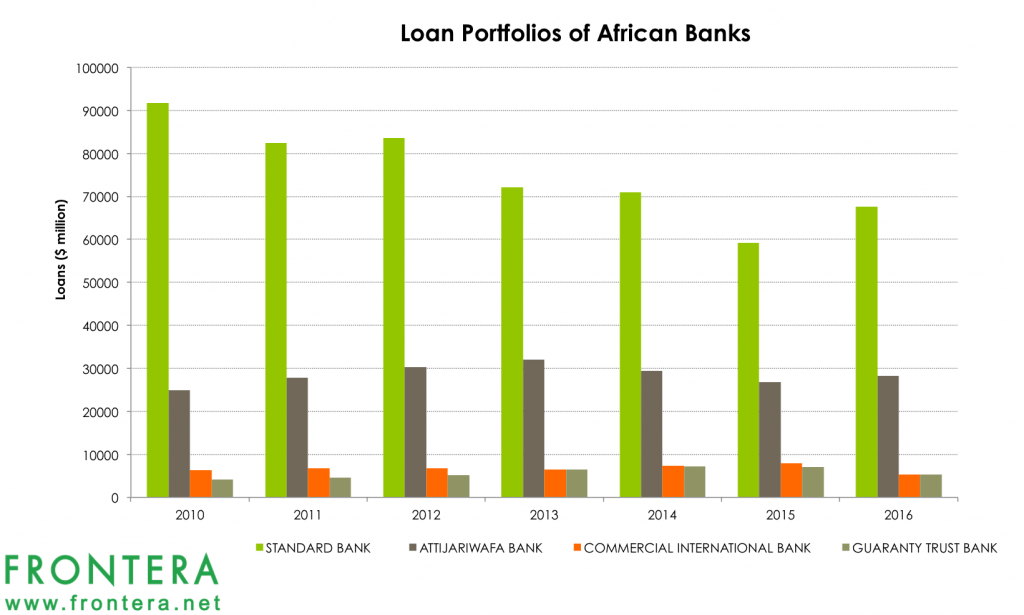 In 2016, Commercial International Bank generated revenues of $2.4 billion and net interest margins of 4.8%. It reported return on assets of 2.7% and return on equity of 31.7% in the same year. 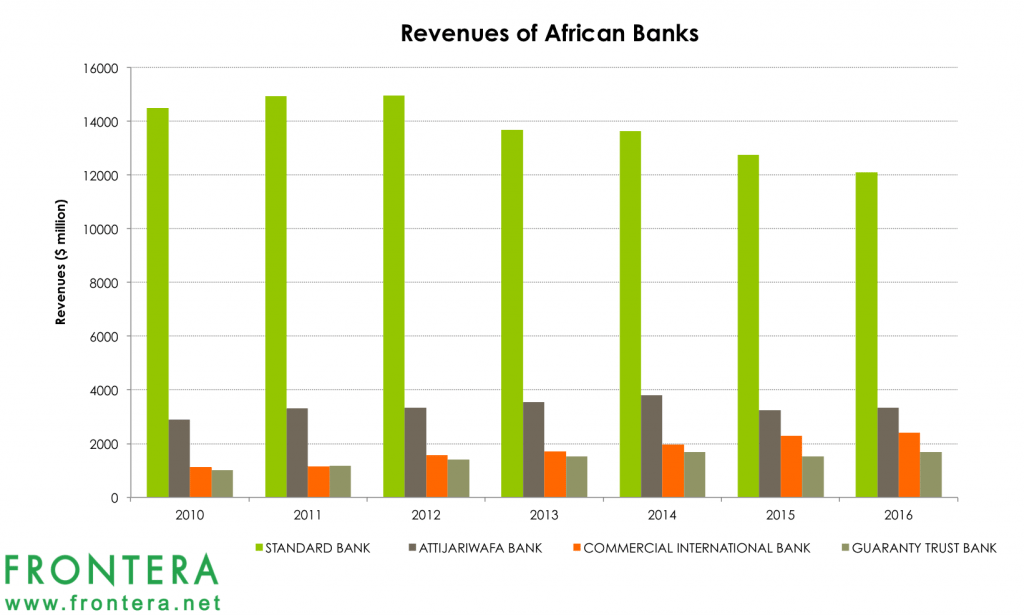 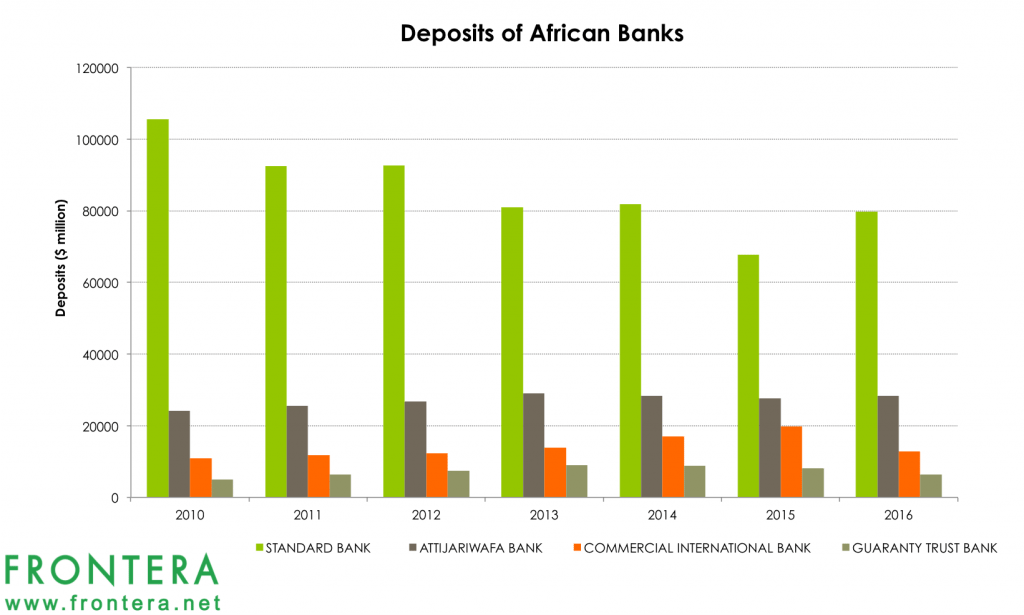 GT Bank listed its shares on the London and German Bourses in 2007, and raised $750 million.

Chief executive of GTBank, Segun Agbaje aims to expand operations into 12-15 countries to make GTBank a “pan-African bank”. GTBank has a dominating market share in Nigeria and in smaller markets like Gambia, Liberia and Sierra Leone it has a market share of at least 5%. The bank has also laid out plans to expand in countries like Ghana, Kenya and Uganda. Recently, GTBank secured a banking license in Tanzania and is eyeing Mozambique as a possible entry into the Southern part of Africa. 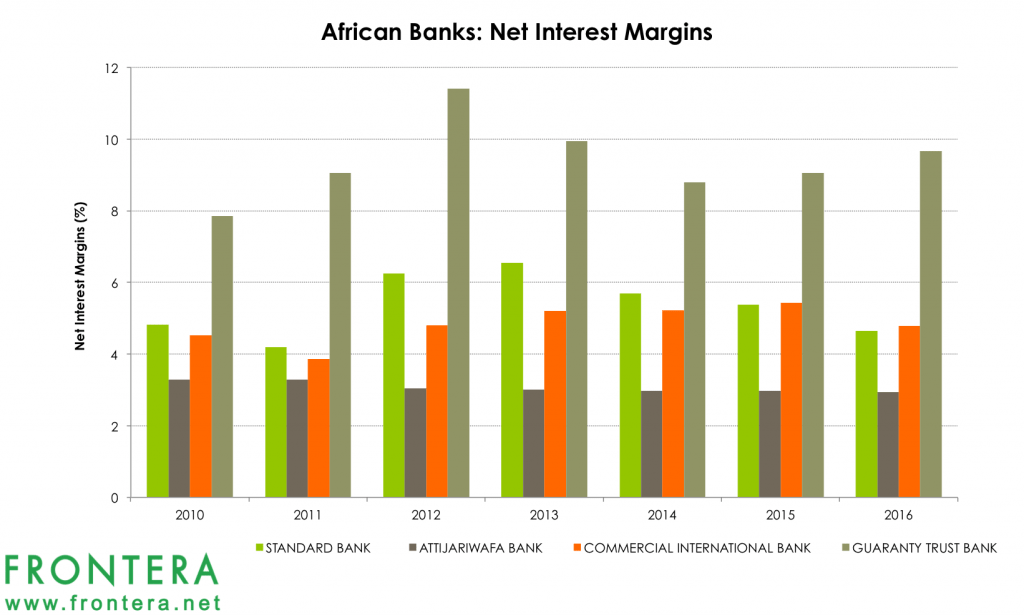