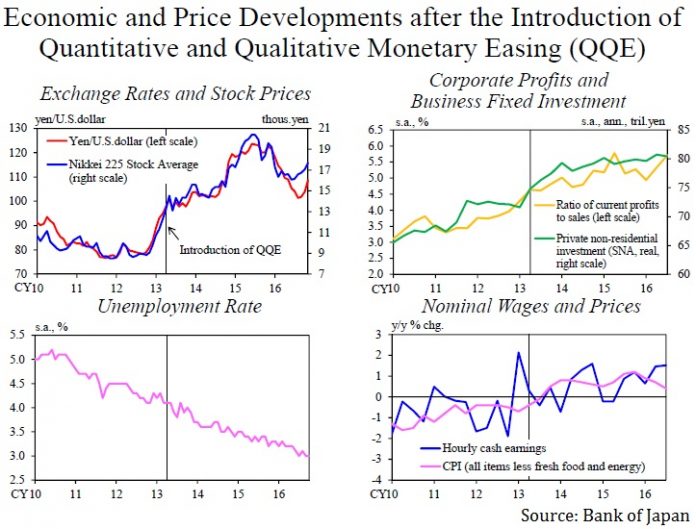 Overall inflation in Japan increased in its latest reading for November. However, core inflation continued to decline. Though external factors are contributing to the overall rise in inflation and increasing Japan’s economic output, it is the internal factors which have yet to see any improvement.

QQE (quantitative and qualitative monetary easing) with yield curve control will be effective only if the situation improves on the domestic front. Otherwise, the Bank of Japan will eventually find itself under immense pressure to keep the 10-year JGB (Japanese Government Bond) yield near 0% in the face of rising interest rates globally.

Haruhiko Kuroda noted that even with interest rates rising in the US, the Bank of Japan has been able to keep 10-year JGB yields at the aforementioned level. It remains to be seen whether the Bank of Japan can keep the yield at its targeted level long enough to resuscitate inflation.

The 2% inflation target: too high?

Kuroda said some observers hold that given the present state of the Japanese economy, the 2% target level for inflation is too high.

He said that when the Great Recession had hit in 2008, the Bank of Japan had limited room to ease monetary policy because of being in deflation. Hence, in order to provide more room for policy easing, it is important that the Japan targets 2% inflation, which is the global standard.

In fact, there is a pool of experts who believe that a 2% target may be too low. They opine that in order for Bank of Japan to have more room to maneuver during a recession, the central bank should aim for 3% to 4% inflation.

If the global economy is able to fend off any more negative surprises, then the Bank of Japan may finally see inflation rising again. This would not only benefit the nation at large, but investors investing into Japanese equities (EWJ) as well.