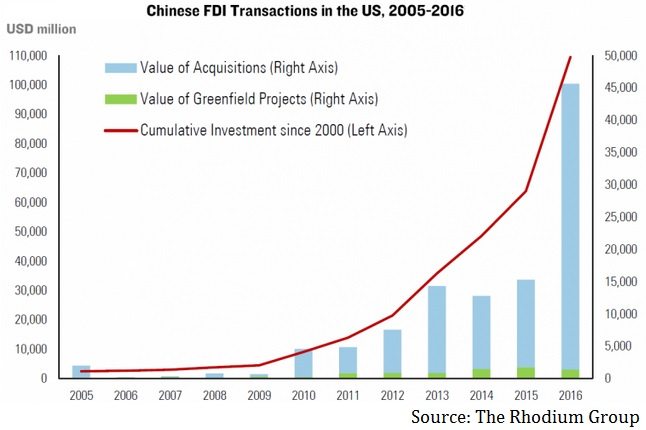 China’s investment in the US tripled

2016 was a tumultuous year for China’s domestic financial markets and its local economy. However, many Chinese foreign investors and international firms were focused overseas, with some embarking on quite the shopping spree in the US.

According to Mergermarket, companies from China invested $53.9 billion in the US. This quantum was spread out over 2016 and was achieved via 75 deals. According to the firm, this number had stood at $11.7 billion in 2015. That’s a 360% jump in one year.

Mergermarket assessed that investments from China formed 12% of all inbound mergers in the US in 2016. This is up sharply from 2% in previous years.

Meanwhile, the Rhodium Group said that the largest allocation of global FDI (foreign direct investment) from China went to the US. The firm held that Chinese companies completed acquisitions and made greenfield investments worth $45.6 billion last year. Acquisitions formed $44 billion of the total quantum.

The firm said that this is triple the quantum seen in 2015 and a tenfold rise vis-à-vis the total investment made five years ago. The cumulative FDI from China invested in the US since 2000 has risen to $109 billion.

Private sector companies from China continued to bring in FDI into the US. FDI from these companies formed 79% of all investment made in 2016, according to the Rhodium Group.

However, one major change from 2015 has been the reduced share of financial investments. In 2015, deals driven by the financial sector had made-up over half of total FDI. In 2016 though, this metric dropped to 30%.

In this series, we’ll look into detail the mergers and acquisitions conducted by Chinese companies in the US in 2016. Then, we’ll move to analyzing whether this surge in deal making can continue in 2017 or not.

Let’s first look at some of the largest deals struck by Chinese companies in the US in 2016.