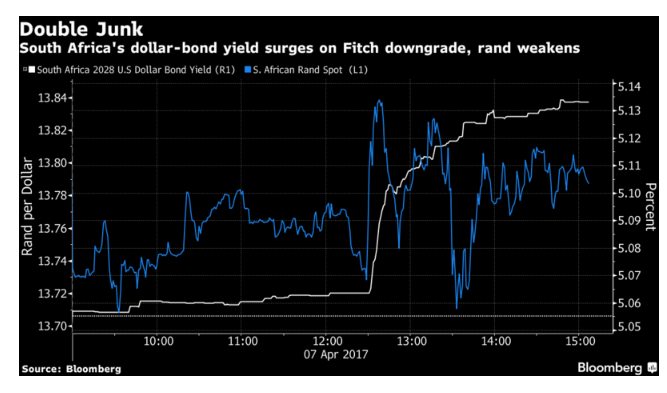 This is post 2 of 6 in the series “Is South Africa On The Edge Of A Cliff?”

Impact of the downgrade

Any credit rating downgrade can typically endanger a country’s position in the financial world. Following the president’s recent cabinet reshuffle, South Africa’s (EZA) sovereign ratings were downgraded, as were the credit ratings of all the major banks. Last month S&P and Fitch cut South Africa’s ratings to junk while Moody’s has put it under review. All these rating agencies now have a negative outlook on South Africa.

The ratings cut directly impacts the South African government’s capacity to borrow money from foreign agencies as it results in a steep rise in costs of borrowing. Further, it also deteriorates South Africa’s attractiveness to institutional investors and could lead to heavy capital outflows with many of these foreign entities are barred from investing in countries with junk ratings.

For banks that have been downgraded, it means restricted access to funds and higher costs of borrowing. It also affects their ability to pay their liabilities. Recent downgrades would also eventually result in an interest rate hike and economists believe monetary policy could get tighter if the political situation did not show any improvement in South Africa. Peter Montalto, head of Emerging Europe, Middle East and Africa Economics at Nomura International, has warned of a 50 basis point interest rate hike next month, and the risk of a recession. Further, bond indices compiled by major western banks (XLF) like Barclays (BCS), Citigroup (C), and JPMorgan Chase (JPM) have parameters related to the credit quality of their constituents that require a minimum investment grade rating. In the case of a junk status rating, South Africa is at risk to lose membership of these indexes leading to a sell-off from funds holding these South African bonds. “Further downgrades on the local currency rating could trigger high levels of selling off of bonds by foreign investors, which could also result in marked currency depreciation,” the Reserve Bank said. South Africa was excluded from one global bond index last month and will be removed from three more in May, the central bank said.

The thought of being excluded from more indexes is “disconcerting given the country’s dependency on portfolio inflows to finance its current account deficit, among other things,” the central bank added. If Moody’s downgraded the country, SA would lose its membership with the World Government Bond Index

Some economists believe South Africa could take up to seven years to earn its investment grade rating back again. However, they believe the banking sector remains attractive despite downgrades.

This is post 2 of 6 in the series “Is South Africa On The Edge Of A Cliff?”