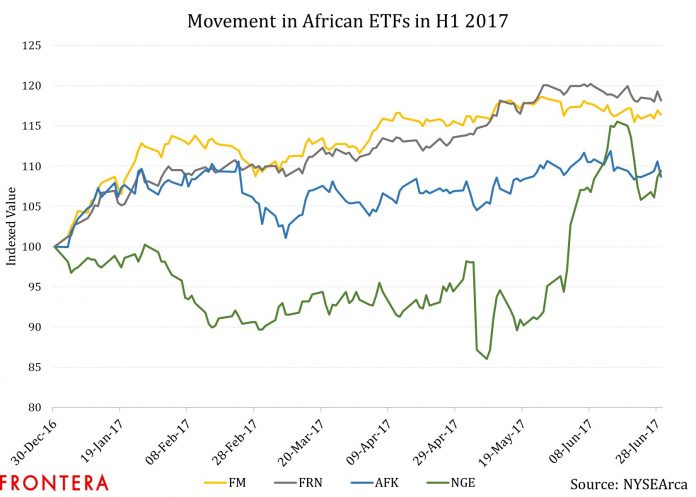 This is post 2 of 2 in the series “In The Frontier Markets Universe, Europe and Africa Have Been Leaders in H1 2017”

African frontier markets have done very well in H1 2017. The MSCI Frontier Markets Africa Index is up 15.5% in the period. However, its performance registered below that of the FM Central & Eastern Europe and CIS Index because its two biggest components – Nigeria and Morocco – posted contrasting performances. While Nigeria pushed the Index higher, Morocco had a dampening effect. 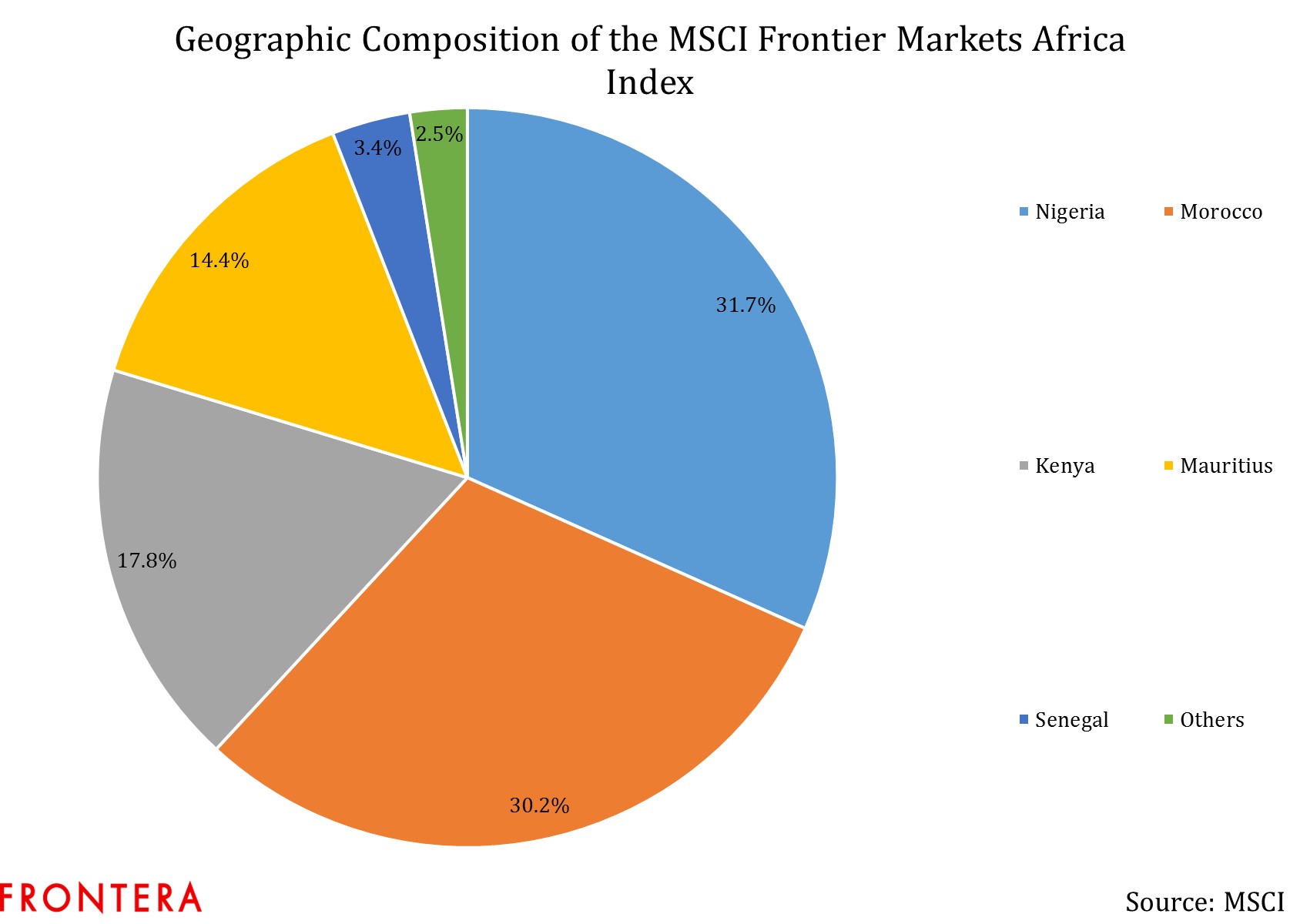 For investing in Africa with ETFs, US investors have the following options available:

Among them, only NGE belongs to the frontier market category. We have compared its performance to the AFK, the iShares MSCI Frontier 100 ETF (FM), and the Guggenheim Frontier Markets ETF (FRN) in the graph below.

The Nigerian Stock Exchange Main-Board Index has gained 23.2% in the first half of this year. However, US investors who have invested in Nigeria equities via the NGE have not received the benefit of these double digit gains as the Nigerian naira has weakened against the US dollar, thus dampening the returns.

The impact of the weakening naira has been heightened since the Central Bank of Nigeria opened up a new forex window where the naira was allowed to actually float freely. This has led to a further weakening of the local currency, which was allegedly being artificially controlled before this move. 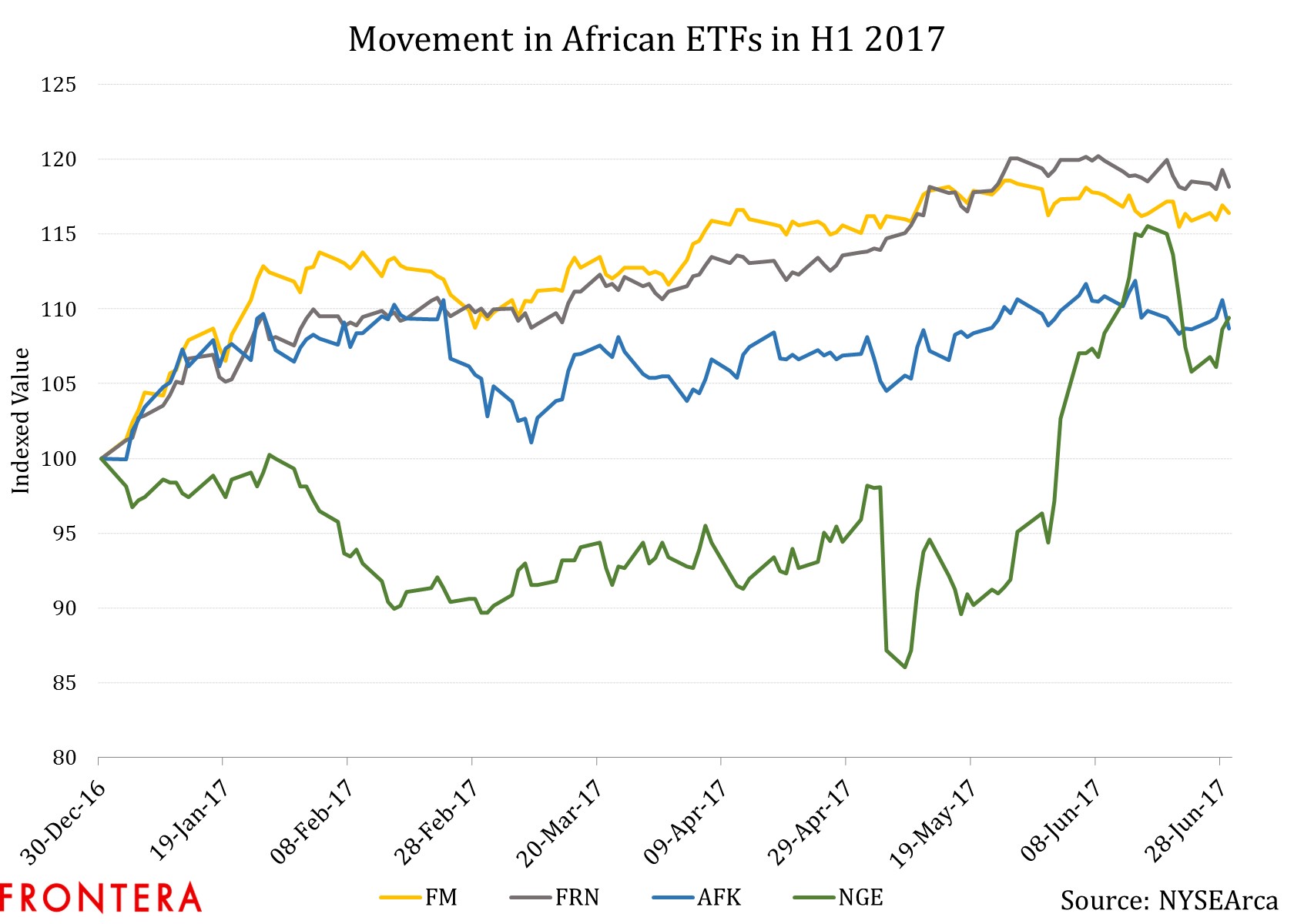 Among the ETFs outlined in the graph above, the NGE is the cheapest. However, investors should exercise some caution while investing in the country due to the expected continued weakening of the domestic unit, which will eat into returns. Though the new window has been effective in making the naira more fairly valued, many are keeping an eye out for signs of further decline.

Other factors which will direct market movement will be the health of President Muhammadu Buhari and the implementation of his administration’s four-year National Economic Recovery and Growth Plan (ERGP). Meanwhile, higher crude oil production may be a double edged sword for Nigeria.

Investors have lapped up international bond issuances by the country on hopes that the ERGP will remain on track and be effective. Successful execution of the plan’s objectives would strengthen their confidence.

At this juncture, given its valuations and prospects, and considering possible dampeners, Nigerian equities appear to be better placed than their South African counterparts, though they do face some competition from their Egyptian peers.

This is post 2 of 2 in the series “In The Frontier Markets Universe, Europe and Africa Have Been Leaders in H1 2017”