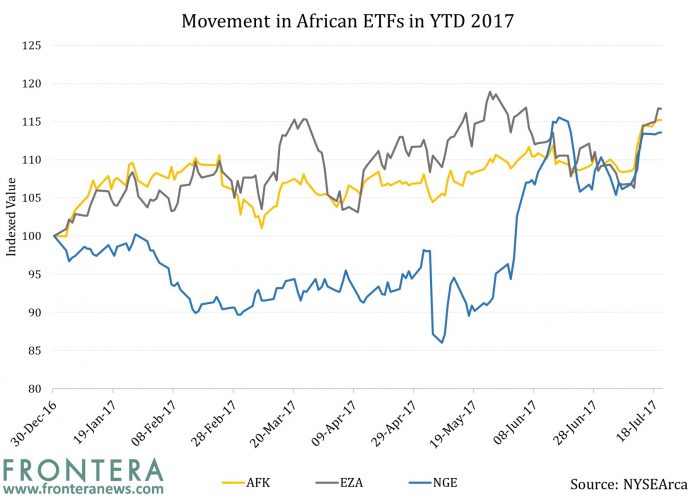 Country-specific and regional ETFs investing in Africa have turned in a positive performance in YTD 2017. The graph below plots the comparative performance of the VanEck Vectors Africa Index ETF (AFK), the iShares MSCI South Africa ETF (EZA), and the Global X MSCI Nigeria ETF (NGE). These funds have returned in the range of 13% (Nigeria) to 17% (South Africa). 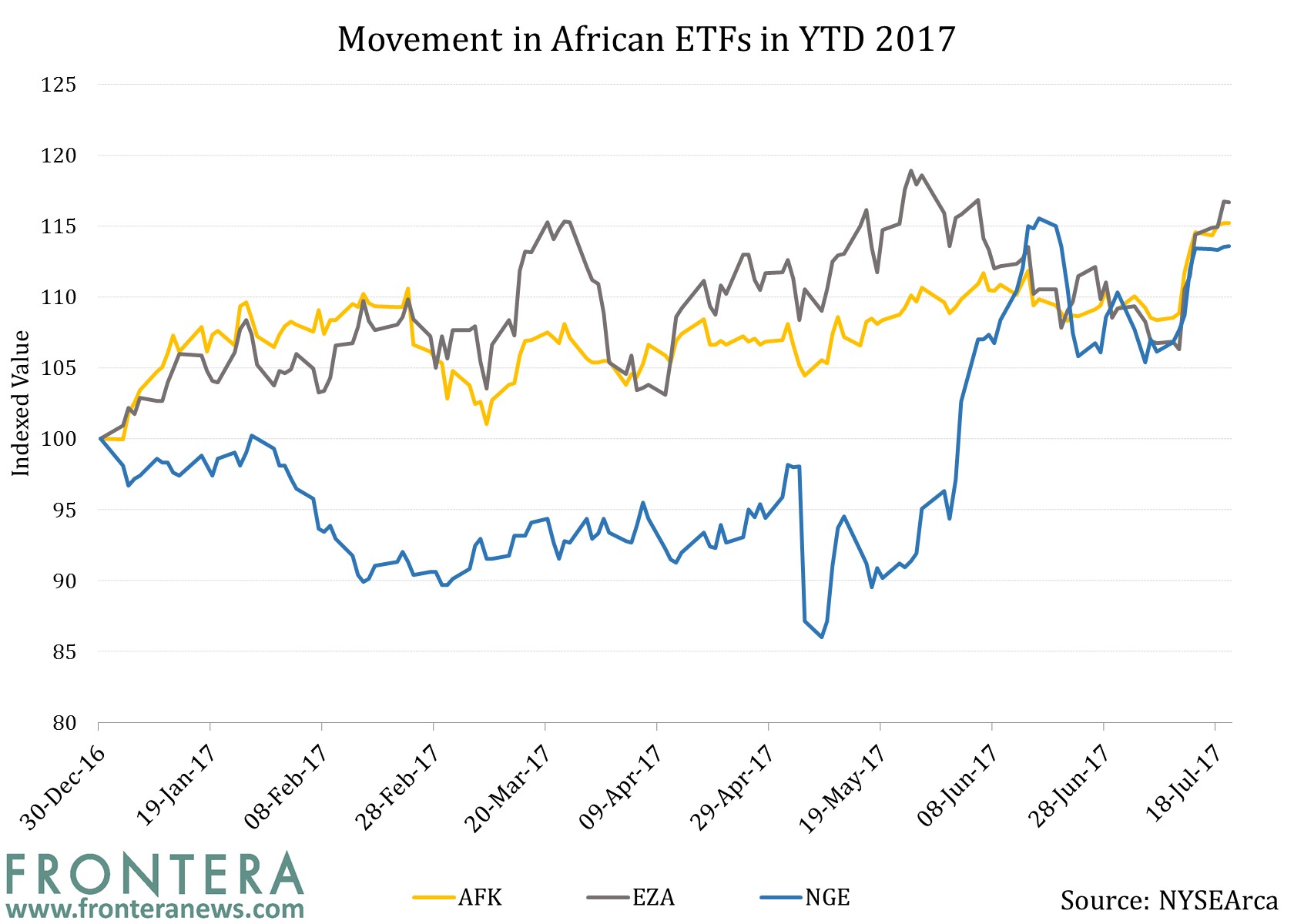 However, in the broader emerging markets spectrum, this performance places them far behind their Asian and European peers this year.

One of the reasons for this is the prominence of the growth story in Asia, which houses much larger and stable economies like India, China, and Taiwan.

The other pertains to country specific factors. 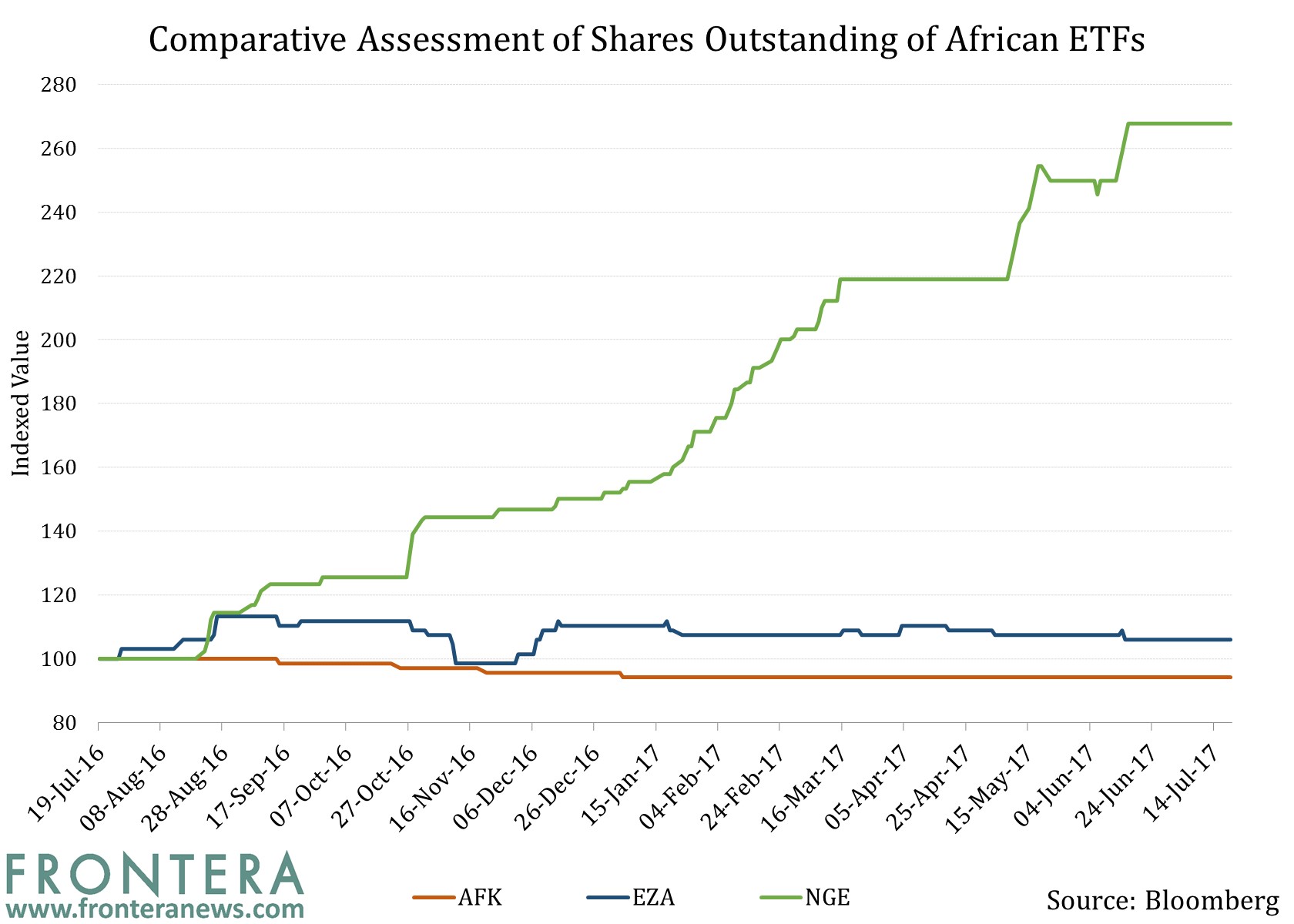 The graph above shows the comparison of outstanding units of each of the three ETFs referred to previously. In relative terms, interest in holding NGE has grown nearly three times compared to a year ago. On the other hand, outstanding units of the EZA are up only 6% in the period, while that of the AFK have declined.

A fund house creates or extinguishes units based on investor demand, thus this data can serve as an indication of interest in buying or selling a fund.

The graph thus shows the high interest in buying NGE and the reduced interest in holding EZA. At its intra-period peak, the outstanding units of the EZA were up 13% from July 2016, but have consistently decreased since mid-April this year.

The graph below shows the pattern of flows amongst the three ETFs in YTD 2017. 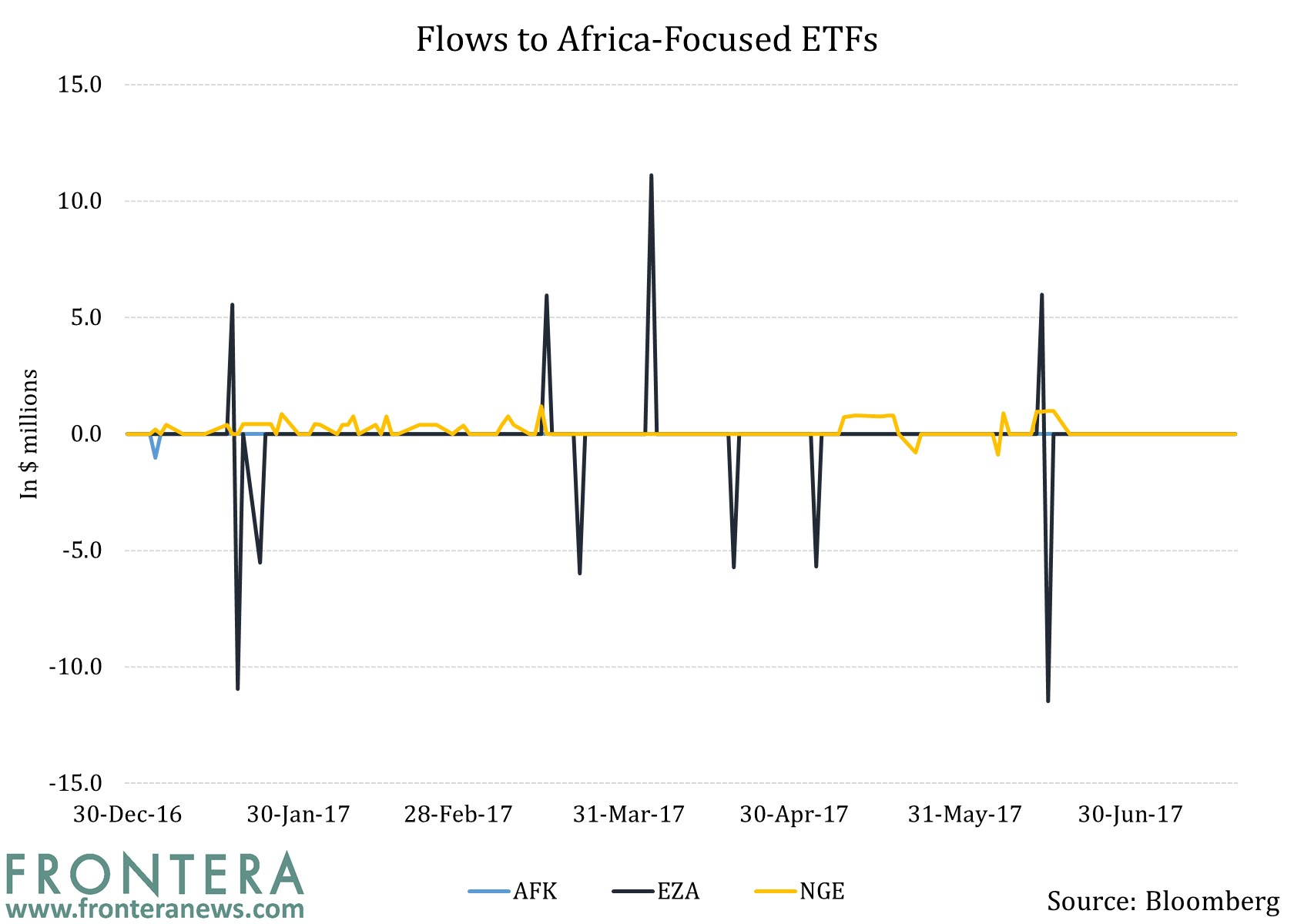 With volatile investment flows, the $435 million EZA has seen net outflows worth $17 million this year while the $58 million NGE has seen net inflows amounting to $21 million. Meanwhile, the $74 million AFK has hardly seen any activity. There was an outflow of $1 million from the fund at the beginning of January and since then, the fund has not witnessed any flows in either direction.

What does this indicate?

This data indicates that investors are sticking to their broad-based bets on the continent via AFK. However, there is a segment which is more interested in country specific funds; and between Nigeria and South Africa, the former is ahead in attracting flows in absolute terms.

Rapid development in mobile money is not going to impact broad-based ETFs like the AFK. However, it is going to impact the financial sector in country-specific ETFs such as NGE as the sector has been by far the biggest positive contributor to the fund’s returns in YTD 2017.

Between Nigeria and South Africa, the increased global interest in investing in mobile money platforms can be expected to impact the former more significantly. Other countries like Kenya, Tanzania, and Uganda also stand to benefit as these nations have a much larger paucity of banking infrastructure and a population which may not be able to afford banking services.

In order to benefit from developments in mobile money in Africa, cherry picking countries and stocks rather than broad-based funds will remain the most viable route.