Africa as an investment avenue for Germany

With the African economy opening up, more and more foreign companies are taking a keen interest in investing in Africa (EZA) (GAF). “I believe that the African continent has also evolved over the past twelve months to an extent that it’s attracting interests from German companies,” said Heinz-Walter Grosse, chairman of the Sub-Saharan Africa Initiative of the German Economy (SAFRI) in a DW interview.

Germany’s (EWG) current allocation to Africa of its overall foreign investment stands at just 2-3%. “The German economy is missing out on this market,” said Development Minister Gerd Müller. Only about 1,000 German companies currently have investment operations in Africa, compared to over 3,700 German firms that have their presence in the US. Africa needs about $93 billion annually to plug its infrastructure deficits alone. German investment could help plug this deficit.

Germany joining the league with China and India

The mineral-rich continent with an expansive consumer base is on course its development agenda. While investing in the African continent does come with its own set of risks, emerging markets (EEM) (VWO) such as China (FXI) and India (EPI) haven’t held back from taking the plunge. China (YINN) and India (INDA) are gradually becoming important trading partners of Africa. 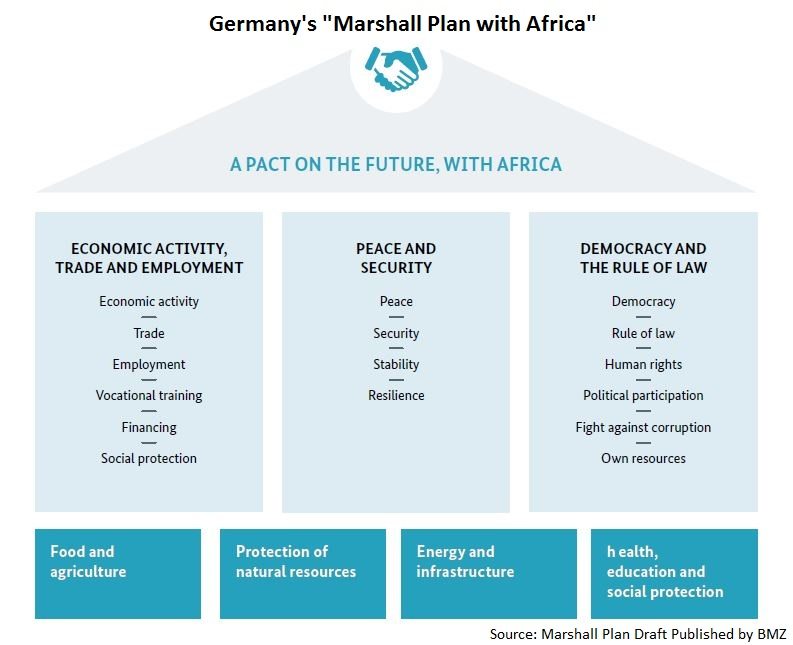 We now see Germany too, eager to join the league.  Germany’s development minister Gerd Müller has unveiled a ‘Marshall Plan with Africa’ to help the continent respond to future economic and labor market challenges. Developed in collaboration with the African Development Bank, the plan intends to establish a “new level” of collaboration between Africa and western countries around education, trade, business development, and energy. Nigerian billionaire Tony Elumelu, called it a “beautiful development”.

“Africa needs a Marshall Plan that addresses youth unemployment……….to alleviate poverty and include more women in mainstream global affairs,” said the AfDB President Akinwumi Adesina who also believes that there has never been a better time for Africa to attract capital investment.