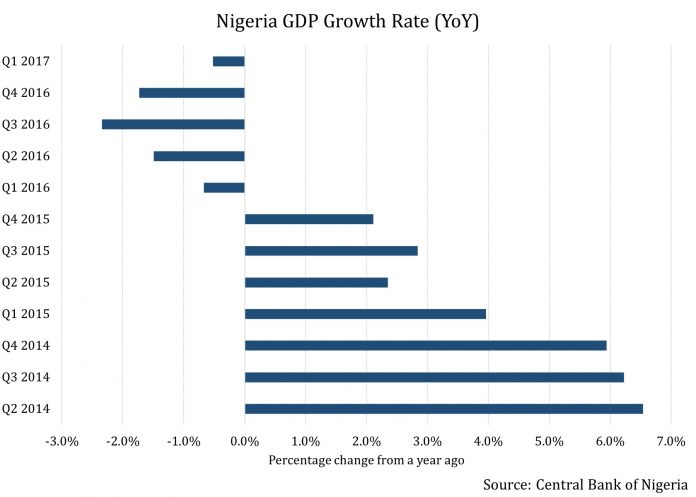 This is post 1 of 3 in the series “But Can They Have Their Wings Clipped?”

Nigerian equities have been riding high for quite some time now. The Nigerian Stock Exchange Main-Board Index has scaled to the 33,000 – a level not seen in the past 23 months.

Outlined below are three broad reasons which have driven the rise. 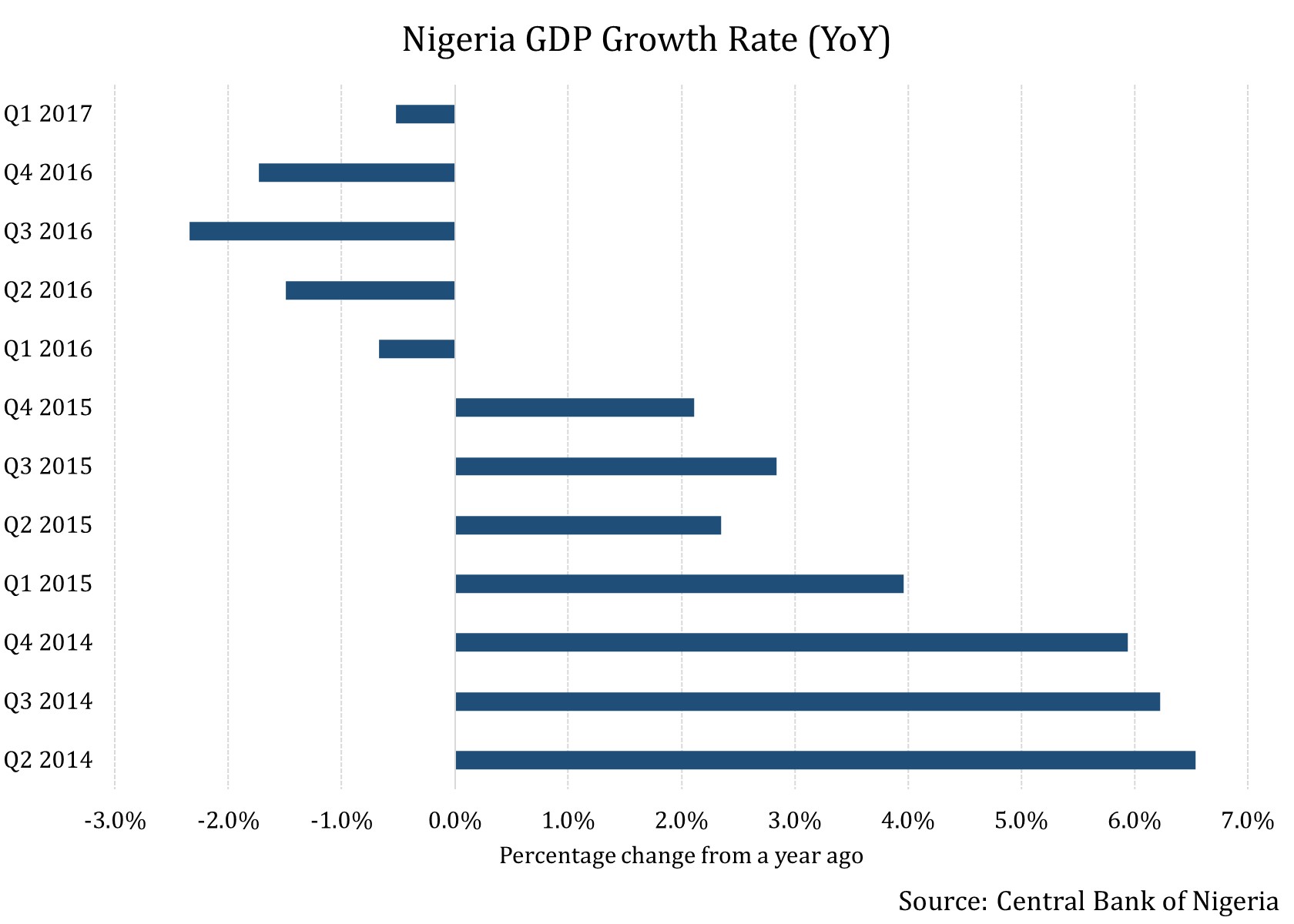 2016 was a challenging year for Nigeria. The country witnessed its first full-year contraction in a quarter of a century.

The country’s economy continues to recede as its Q1 2017 gross domestic product (GDP) growth stood at -0.52%. However, as can be seen from the graph, the pace of decline has been falling, indicating that the worst for the economy may be over.

A similar trend can be observed with inflation which has been declining since hitting its peak of 18.7% in January 2017. The Central Bank of Nigeria has remained firm on its policy rate at 14%. It has refrained from raising rates higher even in the face of rising inflation due to fears of pushing the country further into recession. Local policymakers hold that factors other than supply side shocks are responsible for the rise. Given the recent declining inflation rates, it seems that their stand has been vindicated. 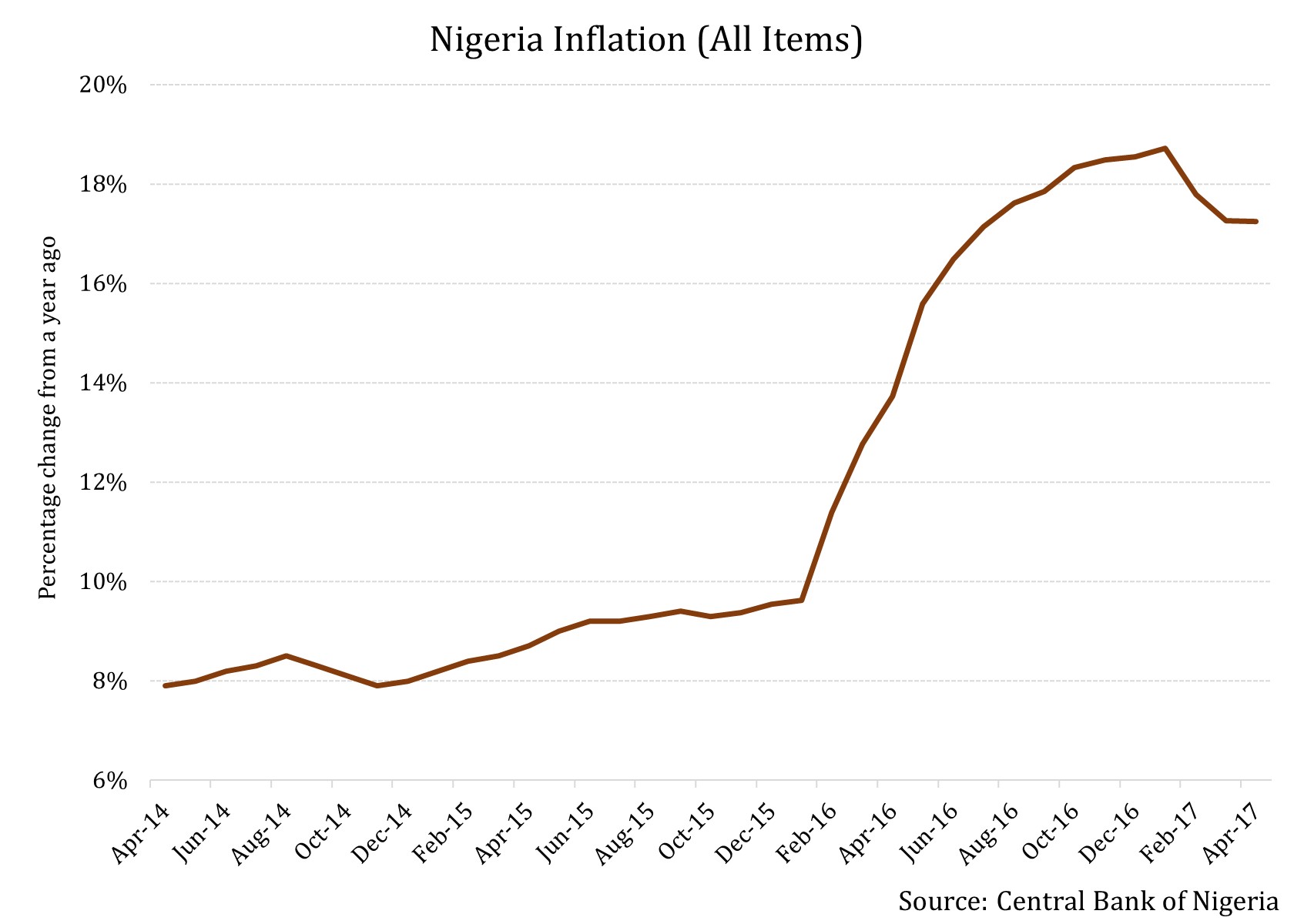 The country’s manufacturing indicators have been pointing to an expansion, and its oil production has bumped up as well. The nation has also expanded its budget in attempt to fuel infrastructure growth.

The stock market is reasonably inexpensive. According to Bloomberg data, the price to earnings of the headline stock index stands at 15.04 – lower than what it was in 2013.

The cheap valuations can also be seen via the Global X MSCI Nigeria ETF (NGE) – the sole ETF traded on US exchanges which dedicatedly invests in Nigerian equities. The price-to-earnings ratio of the fund has declined from 10.38 in 2016 to 8.94 this year according to fund house data.

The Nigerian naira was allowed to float freely from June 15, 2016. However, the sharp decline in its value, which was expected, did not go down well with authorities as they were already reeling from low oil prices.

Hence, they started managing the value of the naira, leading to a wide discrepancy between its official value and that on the parallel market. According to Bloomberg, the currency had nosedived to 520 naira to one dollar in February this year while the official interbank remained at around 315. This in turn led to a corresponding dive in investor confidence.

However, in April 2017, the country’s central bank allowed for a new foreign exchange window where the naira was allowed to actually float freely.

The tweak was a way for the central bank to get comfortable with the weaker naira and observe how the rates on this special window would fare as compared to those in the parallel market.

For the country, it has solved the dollar liquidity problem to a great extent and has also won back some of the lost investor confidence, which is being reflected in Nigerian equities.

In the next article, let’s look at the factors that have helped stocks and expert views on the market.

This is post 1 of 3 in the series “But Can They Have Their Wings Clipped?”