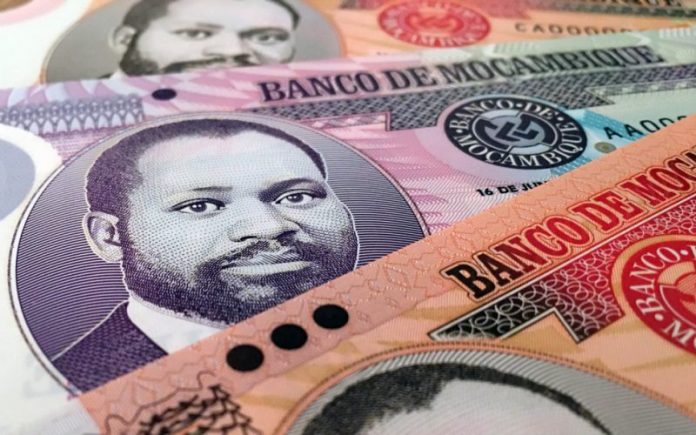 Mozambique is facing serious economic and political blow back as its evolving hidden debt scandal continues to shake international confidence and domestic stability. Investigators uncovered $1.12 billion in fraudulent loans to Pro Indicus and Mozambique Asset Management (MAM) in 2015, implicating the previous administration of President Armando Guebuza. Pro Indicus and MAM secured loans, primarily from Credit Suisse and VTB of Russia in 2013-2014, loans which were then guaranteed by the Mozambique government.

This revelation – which also implicated tuna operator Ematum – led to to the suspension of IMF aid as well as assistance from 14 foreign governments in 2016, putting serious strain on Mozambique’s finances. Pro Indicus, together with MAM and Ematum – all owned by the Mozambique government and run by the country’s security services – racked up more than $2 billion in dubious loans, loans which Mozambique is now obligated to pay.

While there was some speculation as to whether the government would recognize the guaranteed loans, parliament recently ratified the 2015 law providing the aforementioned guarantees. This comes despite a ruling by the country’s administrative court which deemed the loans a breach of budgetary law. In response to the government’s ratification, the opposition walked out during the proceedings. 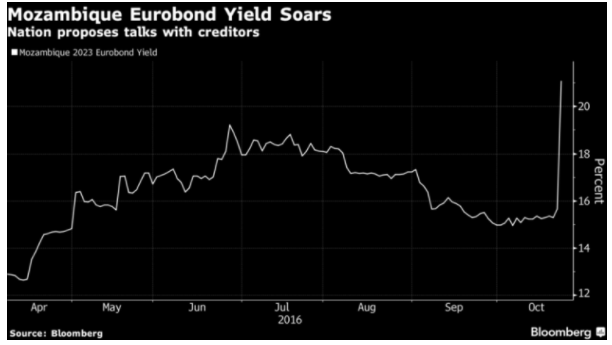 Mozambique is effectively in limbo until an independent audit by Kroll can be completed at the behest of the IMF. The problem is that the nebulous nature of the loan dealings, together with the various international connections and interests in play have forced Kroll to thrice delay the report: originally scheduled for February, the deadline has been pushed back to May 12th. In the meantime, the IMF, foreign donors and Euro bond holders are all waiting to see how the debt will be restructured before continuing to do business with Mozambique.

The sum in question is no trifling amount, as the three loans have increased Mozambique’s foreign debt by 20%. This comes as general government debt reached 120% of GDP in 2016, which also saw the weakest GDP growth in 15 years at 3.3%. As a result of this fiasco Fitch has (since November) rated Mozambique’s Long Term Foreign Currency Issuer Default Rating as RD, and Long Term Local Currency IDR at CC. Since November, Mozambique has also already missed two payments totaling $179 million. Moreover, since no agreement has been reached with creditors to service the debt, expect these dismal ratings to stay in place for the foreseeable future. 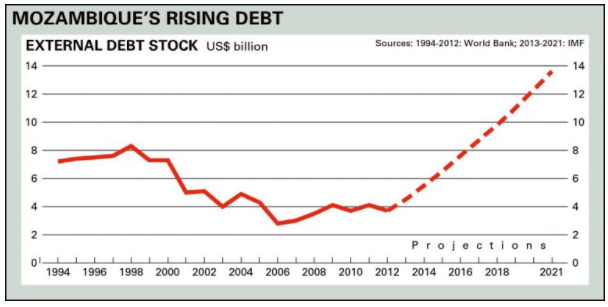 While the World Bank has agreed to new, $1.7 billion Country Partnership Framework for 2017-2021, Mozambique’s debt scandal is distracting the country from existing needs to diversify the economy, with the World Bank warning that “the country needs to prepare for its upcoming resource-rich status.” Currently, the economy has some good news in the form of rising commodity prices, notably the recent 3% rise in LNG and 8% rise in aluminum prices. Another boon has been Mozambique’s rising foreign reserves, which rose from $1.787 billion in December to $2.068 billion in April. While this rise is encouraging, it also further highlights the scale of the debt scandal, one that it is equivalent to the country’s entire foreign reserves. Lastly, the one-time sale of ENI’s LNG stake adds a little extra breathing room, but does not alter the country’s fiscal trajectory.

The potential gains from rising commodity prices, and a truce with rebels in Renamo are being nullified by debt related uncertainty. The cessation of foreign assistance also puts the government’s finances in a tailspin, leaving Mozambique with few avenues of recourse to address rising domestic discontent. Alongside the debt scandal, a key element behind rising instability is inflation. On the one hand, Mozambique is benefiting from an appreciating currency (up 17% since October), especially against the rand. This makes the substantial food and beverage imports from South Africa cheaper, yet any potential windfall is being lost as years of inflation has not been reflected in wages. 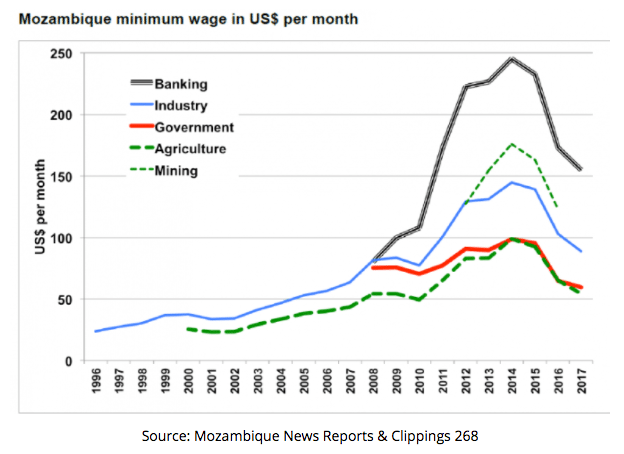 Efforts to improve finances (the current account deficit is estimated at 30% of GDP for 2018), including reductions in oil and bread subsidies mean citizens are not benefiting from cheaper imports. To make matters worse, government efforts to raise the minimum wage have done nothing to ease cost of living pressures, instead angering both the public and international partners. Resident IMF representative Ari Aisen notes that Mozambique has “no clear overview or strategy” concerning minimum wage legislation, as the country boasts 16 different minimum wages across various sectors.

Furthermore, only two of the 16 wage raises (for civil servants and utility workers) were above the 21% inflation rate. Indeed, the increases have only drawn further unwanted attention to the fact that inflation has reduced effective income levels to 2006 levels. For instance, the agriculture and mining minimum monthly wages were $99 and $176 in 2014 respectively: they now stand at $54 and $104. Workers in Mozambique are complaining of a rise in contract and short-term employment, with unions calling for demonstrations in the wake of the new minimum wage rates ahead of traditional May Day parades.

Mozambique’s government has managed to anger everyone from the man on the street to the opposition, international partners, unions and the IMF. Let us hope it can also find some hidden goodwill going forward.

As originally appears on: http://globalriskinsights.com/2017/05/mozambique-debt-scandal/