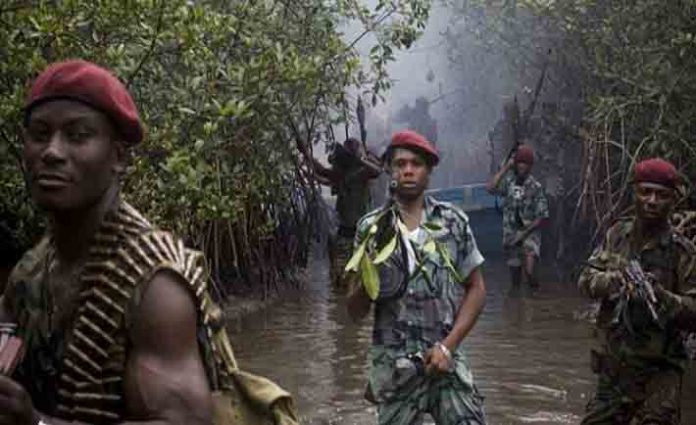 Arguably none have been more destructive this year than the Niger Delta Avengers though. The group first put their name on the map in February with the attack on Royal Dutch Shell’s Forcados export terminal. This incident alone reduced Nigeria’s output by 300,000 barrels per day (bpd) in one fell swoop. Their consistent attacks over the next seven months on other installations – to include Chevron’s Escravos terminal in May – have effectively plunged the country’s oil output to below 1.5m barrels per day (bpd), the lowest in decades. Recent turmoil within the inner ranks of the Avengers suggests it’s only going to get worse.

On 7 August, yet another new rebel group surfaced, the Reformed Niger Delta Avengers (RNDA). As its initial act, they published names of 20 alleged sponsors of the Niger Delta Avengers, the group it just broke away from. Atop the list was former President Goodluck Jonathan, followed by nineteen other high-profile politicians, including former and current governors of oil-producing southern states.

The implication is that leaders of opposition parties from the mostly Christian South of Nigeria are financing attacks to destabilize the current government led by President Muhammadu Buhari, who hails from the predominately Muslim North. Jonathan denied the allegations the day after the list was published, claiming that RNDA was plotting to assassinate him, and that the accusations are part of a plan “to rubbish and torpedo the ongoing peace efforts in the region.”

Following the Forcados incident, Buhari rolled out an aggressive military campaign earlier this year to combat the Avengers. The group proved more tactically and technologically sophisticated than expected, and large-scale attacks continued unabated. At one point Twitter even attempted to stifle the group’s information flow by blocking their account (@NDAvengers) in early July. However, just a few weeks later, the NDA’s spokesman, Mudoch Agbinibo, announced their new official twitter account handle eponymously named @agbiniboND. They continue to use their website alongside a variety of other digital platforms to strengthen their positioning, communicate their political agenda, and announce their latest attacks on foreign owned oil facilities.

The government claims it has recently scaled back its military offensive and decided to push instead for negotiations. However, even before the government military offensive, Buhari had already fallen out of favor not just with the militants, but also with much of the Southern population. One of the major reasons is a proposed amendment to the oil-law that would scrap the Petroleum Host Community Fund (PHCF) that pays a 10% royalty to local communities in the oil producing regions.

Local unrest has been consistently growing. On 11 August, hundreds of protestors rallied outside the Chevron oil facility that had been previously attacked in May. They demanded that the American company relocate more jobs from the capital of Lagos to the Delta state to provide more jobs for locals.

It would be prudent for the political officials recently accused by the RNDA to respond by spending more time developing a renewed economic plan in cooperation with the oil companies that addresses the local population. The last major Delta region insurgent group disarmed in 2009 after 30,000 fighters were bribed with amnesty and a $400 monthly stipend. With oil prices now barely hovering above $40 mark, it’s doubtful the government will have the means to buy peace this time around.