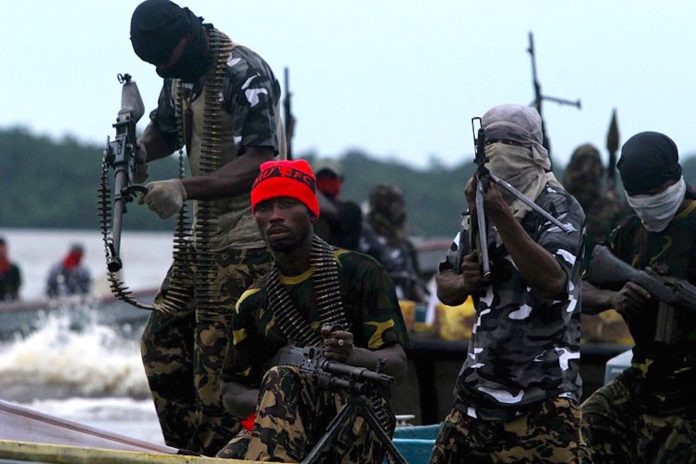 A resurgence of militant attacks on oil infrastructure in the Niger Delta has cut Nigerian crude output to record low levels, in line with EXX Africa’s previous forecasts, although an outbreak of more widespread violence is still unlikely.

On 15 May, suspected militants bombed a gas pipeline belonging to the Nigerian Agip Oil Company in the Southern Ijaw Local Government Area of Bayelsa State. The attack followed a statement on 12 May by the militant group Niger Delta Avengers, calling on international oil companies to leave the Niger Delta or face further attacks. The Avengers claimed responsibility for attacks in May on a Chevron platform, shutting the Warri and Kaduna refineries, and an attack that closed Shell’s Bonny Light export program. In February, the group also claimed an attack on the 250,000 barrels a day (bpd) Forcados terminal. Sabotage attacks and pipeline vandalism have reduced oil production by as much as 400,000 bpd, driving crude output in the Delta to its lowest level in 22 years.

While the Avengers are a relatively unknown group, EXX Africa sources in the Delta claim the group has some 200-300 members, mostly of Ijaw and Urhobo ethnicity, who were previously part of the Movement for the Emancipation of the Niger Delta (MEND). President Muhammadu Buhari has cut amnesty payments by 70% and has not renewed several contracts signed with MEND and other groups such as the Oodua People’s Congress, and instead awarded responsibility for pipeline protection to the military Joint Task Force.

In October 2015 we forecasted that ethnic rivalries over pipeline security contract reallocation, and the looming expiry of the Niger Delta amnesty, would increase the risk of attacks on large pipelines and other oil and gas export infrastructure assets, indicating the return of a new insurgency. While a region-wide insurgency similar to the last outbreak of militant violence between 2004 and 2009 has not yet transpired, the risk of protracted violence targeting energy assets will continue to increase over the next few months.

The government has reallocated its most capable troops to northeastern states to curb the Boko Haram insurgency, leaving the Niger Delta more exposed to militant attacks.

The influx of ex-militants, reportedly well-armed with sophisticated weaponry, is a likely indication of a further uptick in attacks targeting oil and gas infrastructure, security forces and non-compliant local communities by former MEND militants. Continued disgruntlement over a failure to secure substantial revenue shares from oil and gas operations is likely to drive unrest beyond any purported political objective. Furthermore, military pre-occupation with Islamist militant threats in other parts of the country may hinder the full extent of operations required to prevent further attacks. Oil and gas infrastructure will thus face increasingly protracted risk of attack.

The 2015 election confirmed the People’s Democratic Party (PDP) as little more than a party of the south-south and southeast, focused closely on the oil-producing Delta states. That has put the region politically even more in opposition than ever to central government, and consequently more suspicious of any perceived attempts to deprive it of a fair share of the oil wealth it generates. President Buhari has taken a gamble in removing pipeline surveillance contracts awarded to former militant leaders and promoting the role of the security services in extending such protection, despite facing competing claims from host communities to take on surveillance.

In the short term, such campaigns from groups like the Urhobo Gbagbako, the militant wing of the Urhobo ethnic group, are leading to a high level of sabotage, with other smaller groups also giving indications they might join in. The Niger Delta Avengers have so far launched the most disruptive attacks, although the group’s capabilities are more likely to weaken as the government makes arrests of suspected group leaders and boosts security in the Niger Delta.

There are good reasons to believe that a return to the levels of militancy seen in 2009, when oil production was reduced by a third before the amnesty programme was introduced, will be avoided as the Buhari administration adopts a conciliatory line over the key triggers for renewed militancy. President Buhari has also given indications that he wants to promote large-scale development projects in the Delta as a way to compensate communities who have persistently complained that the benefits of the amnesty programme have gone to a handful of well-connected and now very wealthy individuals. The amnesty programme is likely to be extended in some form to avoid a resurgence of militancy, even though it is a severe drain on limited revenues badly affected by the falling oil price.