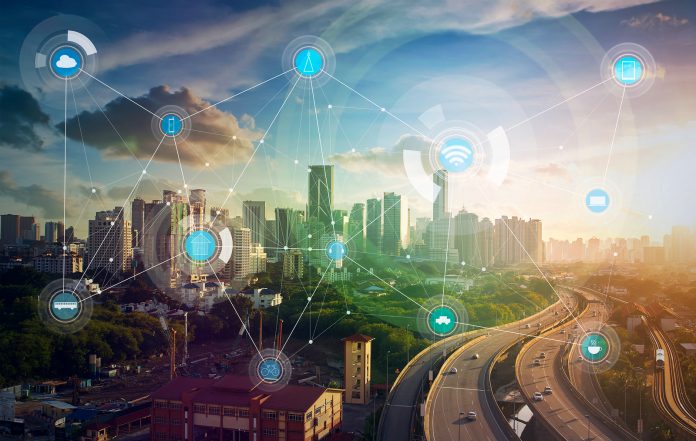 This is post 1 of 3 in the series “Africa’s Internet Infrastructure Poised For Growth. Google and Partners to Invest $100 Million”

As of March 31, 2017, internet penetration in Africa (EZA) (GAF) stood at 27.7%. When compared to the world (ACWI) (VTI) average of 49.6%, this provides a very basic illustration of the need for further investment in internet infrastructure on the continent. The lack of internet access has arguably served as a bottleneck to economic growth, competitiveness, and development of basic services in countries throughout Africa. Currently, only six percent of Africans have broadband internet access. 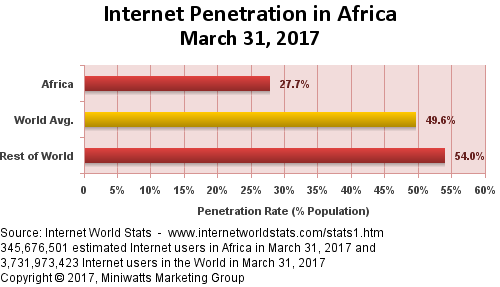 Moreover, the internet market in Africa has been stymied by the poor quality and relative scarcity of the fixed-line infrastructure. Currently, more than 90% of all internet connections are via mobile networks. Figures from the International Telecommunication Union’s ICT report validate the point, showing that fixed-broadband penetration stood at 0.7% in Africa as of 2016, compared to 29.3% mobile broadband penetration. 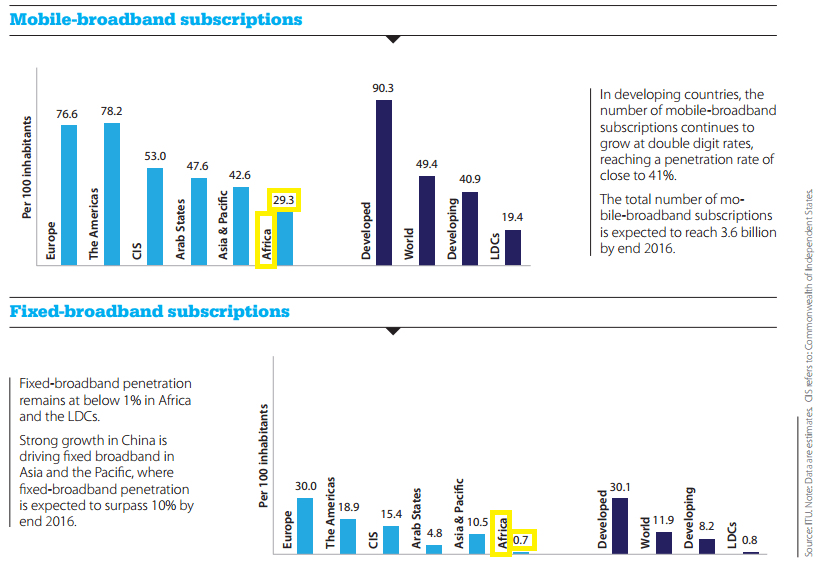 Google’s (GOOGL) new plan intends usher change in this regard. The company has partnered with World Bank Group’s International Finance Corporation, Convergence Partners, and Mitsui to jointly invest $100 million towards Africa’s broadband infrastructure. The investment would go into a broadband infrastructure company, CSquared, focused on building wholesale metro fibre optic networks. “Together with our new partners, we believe CSquared can roll out and operate affordable, high-speed, and reliable infrastructure to further expand internet access in Africa,” said Marian Croak, Vice President for Access Strategy and Emerging Markets (EEM) (VWO) at Google. The transaction is subject to customary closing conditions.

In November 2015, market analysts at Ovum had projected that the number of mobile broadband connections in Africa would reach one billion in 2020, up from 147 million at the end of 2014.

The project CSquared is an extension of Project Link, a program Google first introduced in Kampala, Uganda back in 2013. CSquared was created as a carrier-neutral, open-access and wholesale provider of high-speed metro fibre in sub-Saharan Africa. It already has high-quality fibre networks in Uganda (800 km) and Ghana (840 km). With this new $100 million financial commitment, CSquared now intends to expand to other regions in Africa as discussed in the next part of this series.

This is post 1 of 3 in the series “Africa’s Internet Infrastructure Poised For Growth. Google and Partners to Invest $100 Million”