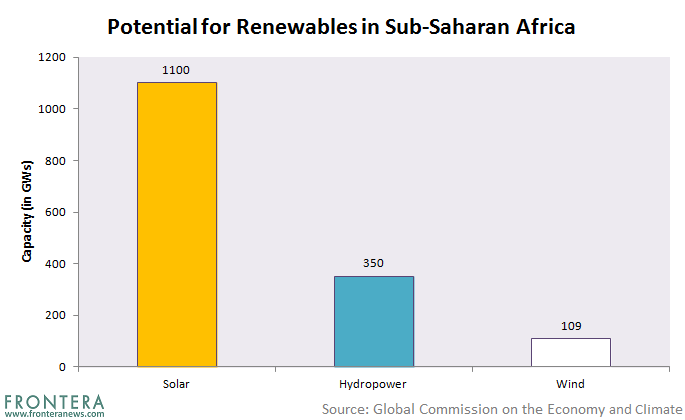 This is post 3 of 3 in the series “Solar Power in the Lead, as Future Energy Takes Center Stage in the Emerging Markets”

The African solar market could see brighter days ahead

According to Ngozi Okonjo-Iweala, co-chair of the Global Commission on the Economy and Climate, “overall investment in sub-Saharan Africa, particularly for clean energy, represents a $783 billion opportunity.” We’re already seeing the international agencies such as the World Bank Group and the BRICS Bank funding projects in the solar (TAN) energy space in Africa (EZA). South Africa has targeted 18,800MW of electricity to be supplied through renewable energy (ICLN) (PBW) by 2030. The African solar market in particular radiates immense potential (see chart below). Moreover, the cost of producing solar-powered energy has fallen dramatically. According to the International Renewable Energy Agency (IRENA), the cost of solar photovoltaic (PV) panels is down by 80% since the end of 2009. This provides Africa with a unique opportunity to bridge the power deficit using one of the continents most abundant natural resources.

Companies cashing in on the African solar market growth

Here’s a list of the top 10 operational solar PV plants in Africa:

There are also certain other players that are part of announced solar PV projects in Africa such as Scatec Solar ASA (SSO.OL), Chint Electrics (601877.SS), and General Electric (GE).

This is post 3 of 3 in the series “Solar Power in the Lead, as Future Energy Takes Center Stage in the Emerging Markets”