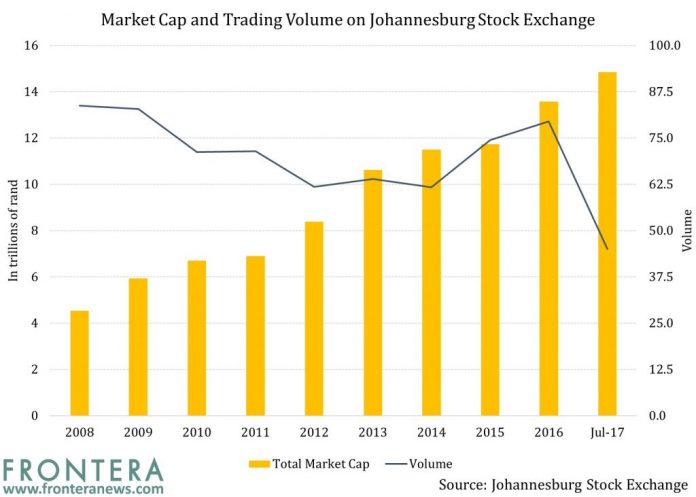 This is post 4 of 4 in the series “Which Are The Six Largest Emerging Market Stock Exchanges?”

The Johannesburg Stock Exchange is the largest stock exchange in Africa and ranks among the top 20 stock exchanges in the world in terms of market capitalization. In the emerging markets universe, it stands sixth behind two exchanges each from China and India, and the Korea Exchange.

The graph below plots the market cap (in South African rand) and volume on the exchange since 2008. The exchange was founded on November 8, 1887 by Benjamin Wollan during the first South African gold rush. The country first brought in the Stock Exchange Control Act aimed at financial markets in 1947 and the exchange shifted to electronic trading in the early 1990s.

The Johannesburg Stock Exchange provides trading in equities and bonds along with financial, commodity, and interest rate derivatives. This wide array of products was made possible by the acquisition of the South African Futures Exchange (SAFEX) in 2001 and the Bond Exchange of South Africa (BESA) in 2009.

In 2003, the exchange launched an alternative exchange, AltX, for small and mid-sized listings. This was followed by the Yield X for interest rate and currency instruments. The exchange, whose market cap (in USD) and liquidity is displayed in the graph above, still lists DRD and SABMiller (SA Breweries) – the two oldest stocks which were listed in 1895 and 1897 respectively. From 2007 until 2017, the traded value on the Johannesburg Stock Exchange has grown nearly 8% on an annual basis. The traded value had grown 17.5% in 2016 compared to the previous year.

This is post 4 of 4 in the series “Which Are The Six Largest Emerging Market Stock Exchanges?”