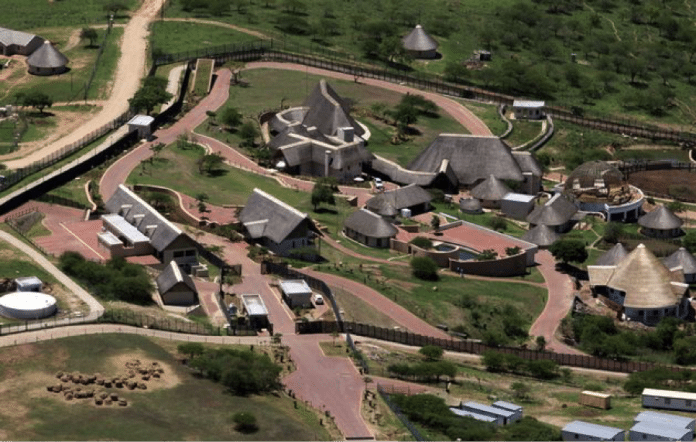 After two decades of amazing growth, throughout which its economy tripled in size, South Africa has fallen on hard times. As of 29 September its currency, the rand, is trading at an all-time low. Business confidence has reached depths not seen since the Asian currency crisis. And all signs indicate that the economy will enter a recession this quarter.

It’s during such times of adversity that a visionary head of state can lead his people to a new era of prosperity. Unless you’re President Jacob Zuma, of course, in which case you might consider tapping the state coffers for US$ 21 million of ‘investment’ on your gargantuan private home (pictured), for such critical features as an amphitheater and a chicken run. His widely derided ‘National Development Plan’, which aims to increase growth by 3 percent each year through 2019, includes no plans to improve the national power grid, Eskom, which suffers from a critical lack of investment.

In response to this lack of clarity and leadership, South African businesses are responding by hoarding cash and investing abroad. But as many retailers are discovering, sub-Saharan Africa can bring even more challenges than the home front. Tiger Brands, the country’s largest food company, just wrote off most of its US$ 173 million investment in a Nigerian flour producer. And the upscale retailer Woolworth’s just closed its three Nigerian stores after just three years of trading.

But not all news is bad in the Rainbow Nation. A recent report detailed the success of Somali entrepreneurs in Johannesburg’s townships, who are building a thriving ecosystem of discounted ‘cash and carry’ retail stores. The trend is evolving so quickly that a business academy was recently launched to teach ‘the Somali model’ of low prices and lean inventory management to aspiring South African entrepreneurs.

Shanghai Is Piloting A New Startup Visa For Foreign Entrepreneurs