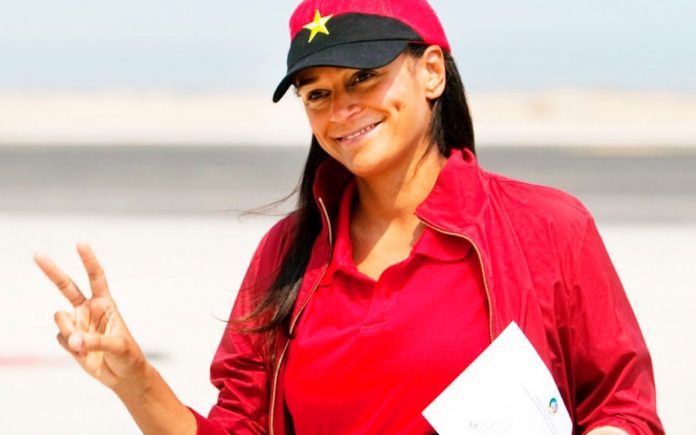 Since the end of its civil war in 2002, Angola has become Africa’s largest oil exporter, recently surpassing Nigeria. Angola’s oil boom in recent years has seen billions in foreign investment, but also a lack of economic diversification that has resulted in over 50% of GDP, 90% of export revenue, and 80% of government spending becoming reliant on oil. Unsurprisingly, the collapse of oil prices has crippled the Angolan economy. While this is not a new development, the nature of Angolan politics and the stranglehold of the dos Santos family are threatening economic collapse.

Specifically, the increasingly prominent position being played by Isabel dos Santos, the daughter of long-time leader President Jose Eduardo dos Santos, threatens a concentration of economic power that could doom the country. Having ruled Angola since 1979, President dos Santos and his family have long benefited from extensive ownership of and influence over large swathes of the Angolan economy, especially the energy sector. Indeed this dynastic stranglehold has led Isabel dos Santos to amass a fortune of some $3.4 billion, making her Africa’s richest woman.

She who controls Sonangol, controls Luanda

The threat posed by Isabel’s growing influence is that she now has substantial control over both the country’s energy and banking sectors. In what appear to be efforts at succession planning by an aging President dos Santos, Isabel was appointed the head of the state-run oil giant Sonangol in June. Sonangol’s oil revenue effectively bankrolls the entire Angolan state, which puts Isabel in charge of the national purse strings. This appointment has met with resistance, with the Supreme Court in October demanding that the President respond to an inquiry into the appointment of his daughter.

Isabel has maintained that opposition to her appointment is politically driven, stating that “the issue of my professional competence does not seem to be something reasonable. To me it looks to be part of the political games ahead of elections.” Angola is scheduled for elections in 2017, and while President dos Santos is likely to win, the aging president has stated he plans to retire in 2018. Whether this comes about or not, the President is ensuring that his children control the government’s revenue streams going forward. This is a move to further entrench the dos Santos dynasty, as well as ensure continuing influence in the event of the President’s unexpected defeat, or death – a conundrum recently faced by the death of Islam Karimov in Uzbekistan: the President is well aware of this lesson.

Sonangol is facing serious headwinds due to low oil prices and a lack of operating transparency. Since Sonangol bankrolls Angola, as the company fares, so does the country. Poor business performance is mirrored in slowing Angolan growth and the continuing decline of the country’s foreign exchange reserves from $22.928 billion in September, to $21.95 billion in October. The company has already sold off some non-oil assets, yet it recently faced off with Chevron, with the latter demanding the immediate repayment of $300 million in debt payments. Chevron went so far as threatening to leave Angola if the payment was not made. Sonangol has since implemented a repayment schedule.

More embarrassingly, despite receiving a $15 billion loan from the China Development Bank (CDB), Sonangol has been unable to pay its suppliers, forcing employees to bring their own toilet paper from home. To add to the company’s problems, the CDB has refused to provide any further assistance citing a lack of transparency and bad governance. While Angola has managed to attract $1.5 billion from the African Development Bank, and $230 million from the World Bank for economic diversification projects, serious funding shortages remain.

If Sonangol and by extension Angola are in such dire financial straits, why then did Angola pull-out of discussions with the IMF for a $4.5 billion loan soon after appointing Isabel in June?

The reason for this is that Isabel dos Santos has also been increasing her control over the Angolan financial sector. In order to understand the extend of her influence we must look at the five largest banks in the country: Banco Economico (BE), Banco Angolano de Investimentos (BAI), Banco de Poupanca e Crédito (BPC), Banco de Fomento de Angola (BFA), and Banco BIC (BIC).

Firstly, 40% of BE is owned by Sonangol, now headed by Isabel; she is also connected to Grupo GENI which owns another 19.9% of BE. Isabel owns 8.5% of BAI stock, with members of the dos Santos clique in control of another 41.5%. BPC is government owned with President dos Santos, and by extension Isabel, in direct control. On October 7th a takeover move for 51.5% of BPA by UNITEL was approved. Isabel owns 25% of UNITEL stock, with Sonangol controlling another 25%. Grupo GENI is also involved in BFA, further increasing Isabel’s stake in the bank. Similarly, at least 41.5% of BIC’s stock is owned by Isabel.

Add to this the facts that 55% of the smaller Banco Sol is owned by a subsidiary of a government conglomerate run by the dos Santos inner circle, and that 49% of the South African Standard Bank is owned by Isabel’s brother Jose (who also heads the country’s sovereign wealth fund) and situation becomes very grim.

By running Sonangol, and with her direct and indirect (via family members) hold over the banking sector, Isabel is in firmly in control of almost all capital in the country. There now exists a serious risk that Sonangol’s woes will contaminate the banking sector. Isabel has the power to pressure banks which she controls to bail out the company (which funds the government) that she runs. The reluctance of international lenders such as the DBC only encourage Isabel to dip into the country’s banks on a whim to bolster Sonangol.

This would dry up funds for other sectors and companies in Angola, and if Sonangol or other companies controlled by Isabel miss their repayments, the country’s major banks will go bust and the funds of everyday Angolans disappear. Conversely, if Sonangol becomes bankrupt, its extensive holdings in Angolan banks will also cause them to go under.

Another risk facing Angola is the fact that the government’s funding alternatives in the face of low oil prices are no less dubious. If Angola were to seek to bridge its funding gap by issuing bonds, it would still face the same kind of problems. Angolan bonds are issued in kwanzas, with an average 20% annual interest rate. Yet with annual inflation sitting at around 40%, any prospective bond buyers would lose money. This will keep foreign investors away, and the domestic banks controlled by Isabel would have to fill the gap to keep the government ru

Isabel’s banks would lend money to the government, yet the loss incurred from inflation would not appear on company records, which would instead show a 20% increase in revenue: this scenario would quickly drain national savings.

Do not be fooled by Angola’s token decision to adopt FACTA and implement in 2017; the country’s financial sector is only getting murkier, and the outlook for 2017 remains very uncertain.