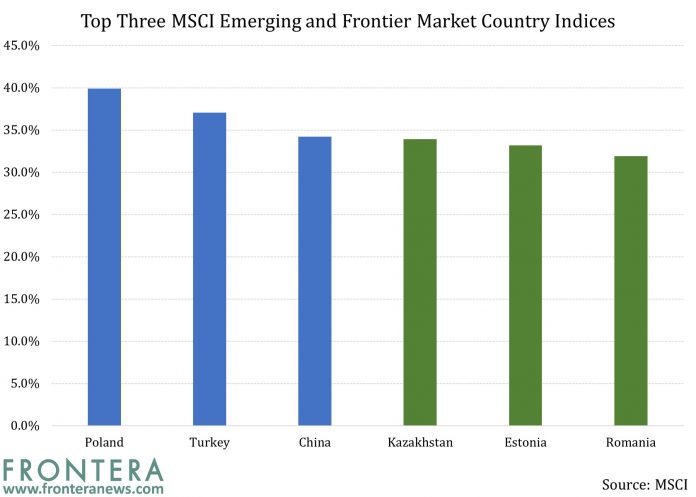 This is post 1 of 3 in the series “Are Frontier Markets Good Diversifiers For Emerging Markets?”

Equities from emerging and frontier markets have attracted quite a bit of attention this year due to the rapid gains they have posted. As of August 10, the MSCI Emerging Markets Index had risen 22.5% and the MSCI Frontier Markets Index had gained 14.5% for the year.

The graph below displays the return performance of top three MSCI country indices for nations classified as emerging and frontier markets respectively, for YTD 2017. Recently, we published an analysis on how emerging markets, which decoupled with US equities last year after the Presidential elections in November, are now recoupling again, and the implications this has on your portfolio diversification.

With investors showing a keen interest in emerging markets equities and also showing signs of warming up to frontier markets, we put these two asset classes under the microscope to assess diversification benefits.

The graph below plots the three-month correlation coefficient between the returns of the following two ETFs: According to the graph above, the correlation between emerging and frontier markets equities has been on the decline in the past two months. Over a five year period, it had reached its lowest reading of 0.36 towards the end of 2016. Meanwhile, its highest reading of 0.88 was seen at the end of October 2013.

Importantly, we tested this result for significance, and an analysis reveals that the relationship is statistically significant since the probability value which emerges from the test is much lower than the cut-off level of 0.05. This means that the probability of obtaining the given correlation coefficient by sheer chance is much less than five out of 100.

The low coefficient of correlation, along with the statistical significance of the result, means that there is a weak positive relationship between emerging and frontier markets equities, i.e., a change in price in either direction in one asset class is not replicated strongly in the other one. This means that both can co-exist in a portfolio without reducing the diversification benefits as emerging markets and US equities seem to be doing at present.

In the next article, let’s extend this argument to which frontier markets can be good diversifiers to a broad-based exposure to the asset class.

This is post 1 of 3 in the series “Are Frontier Markets Good Diversifiers For Emerging Markets?”