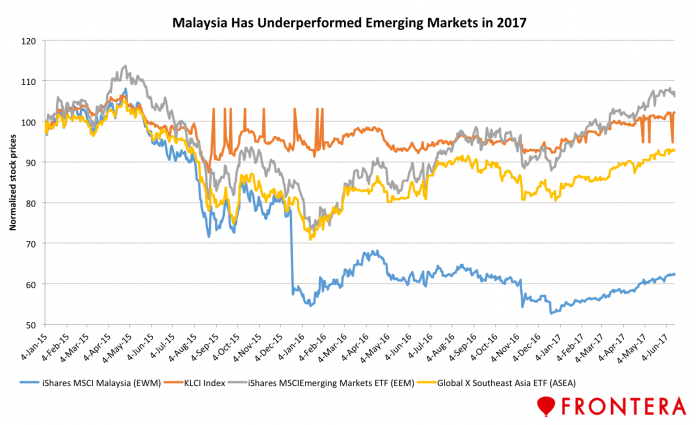 Malaysian stock markets are turning around. As commodity prices recover and risks of a global slowdown and trade wars wane, many believe Malaysia (EWM) has immense potential for growth.

Malaysia’s stock market has rebounded in 2017 after underperforming in 2016. Malaysia’s benchmark index the FTSE Bursa Malaysia KLCI equity index touched two year highs on June 5 as consolidation in the banking sector has led to a rally in shares prices of financial stocks. YTD, the KLCI Index has gained 9% as fears of a trade war with China have eased and commodity prices stabilized.

Affin Hwang Capital Research is bullish on Malaysian equities and has a target of 1813 for the KLCI Index by end of 2017. Affin Hwang believes Malaysia’s macro fundamentals are favorable for a rally as the country’s GDP is growing at a steady pace and the Malaysian ringgit continues to recover. “We believe that things will improve further as we move deeper into 2017,” the firm said.

Fears of western protectionism are diminishing

Risks of a trade war between US and China have waned and investors now have a clearer picture on Fed’s stance on monetary policy. U.S. interest rates hikes typically have negative implications for investments in emerging markets, as investors tend to redirect their funds toward dollar denominated assets that offer competitive yields and are generally less risky. China is Malaysia’s biggest export partner and any slowdown in China has a direct impact on Malaysian trade.

Hung Tran, executive managing director of IIF recently told Reuters, “Looking back at the first five months of the year, it is clear that near-term threats of trade conflict have subsided significantly.”

“All the threats of naming China as currency manipulators, the increase in tariffs, abandonment of Nafta did not come to pass,” he continued. “Assuming ongoing improvement in global and EM growth and a gradual, well-communicated path of Fed tightening through 2018, we are now a bit more optimistic on EM capital flows,” added Tran.

Malaysia’s economic indicators display signs of a recovery. Its first quarter GDP beat expectations and grew by 5.6% year over year and 1.8% on a seasonally adjusted basis. This is the highest rate of growth in two years, and the Central Bank of Malaysia attributes it to higher domestic demand and expectations of growth in exports.

Several brokerage houses upgraded their forecasts for 2017 after the outstanding performance. HLIB Research now expects the Malaysian economy to grow by 4.9% higher than its previous estimate of 4.5%, while AllianceDBS Research upgraded GDP growth estimates to 4.8%, from 4.4% previously. Standard Chartered Bank also raised its forecast for Malaysia’s GDP growth to 4.6% from 4.1%. Analysts base their optimism on recovery in domestic and export sectors and growth in private investments in the country.

Additionally, private sector demand grew 8.2% year over year in the first quarter, as higher investments brightened the outlook for the economy. Further, economists expect the country’s inflation to cool down from 5.1% in March 2017 to 3-4% by the end of the year.

But the picture is not all rosy for Malaysia (ASEA). Foreign investors in the country need to be wary of the spillover effects of political, regulatory, and geopolitical risks of developed economies on the region. Further, in case Trump advances any further on his protectionist policies, export oriented emerging market economies (EEM) (VWO) like Malaysia would be hit hardest.

Fund managers will likely balance out their exposure between emerging markets and developed markets to hedge against such risks. “However, this flow process may be brought to a halt before it runs its course. Like during the 1997 Asian financial crisis, some funds will have recognized that it is time to pull out,” said Pong Teng Siew, head of research, Inter-Pacific Securities.

Furthermore, issues related to the Malaysia 1MDB scandal continue to worry investors. 1MDB is Malaysia’s sovereign fund. Recently, the United States filed complaints to recover about $540 million it says was stolen from the fund, and with investigations still underway, there may be more to come.