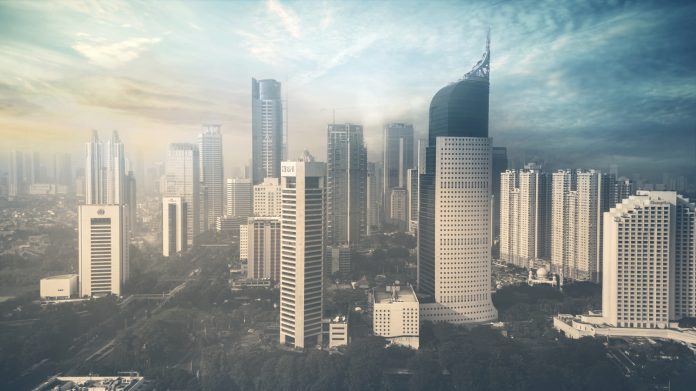 A booming economy, low credit penetration, and high margins are driving optimism in Indonesia’s banking sector. Last month, Moody’s upgraded its outlook for Indonesian banks from stable to positive, following shortly after the recent S&P upgrade for the country.

This has directly impacted credit growth in the country. In June 2017, credit growth slowed down to 7.4%, from 9.1% during the same period last year and from its peak of 22.6% in 2012. Overall for 2017, Indonesia’s Financial Services Authority expects credit growth of 12%. 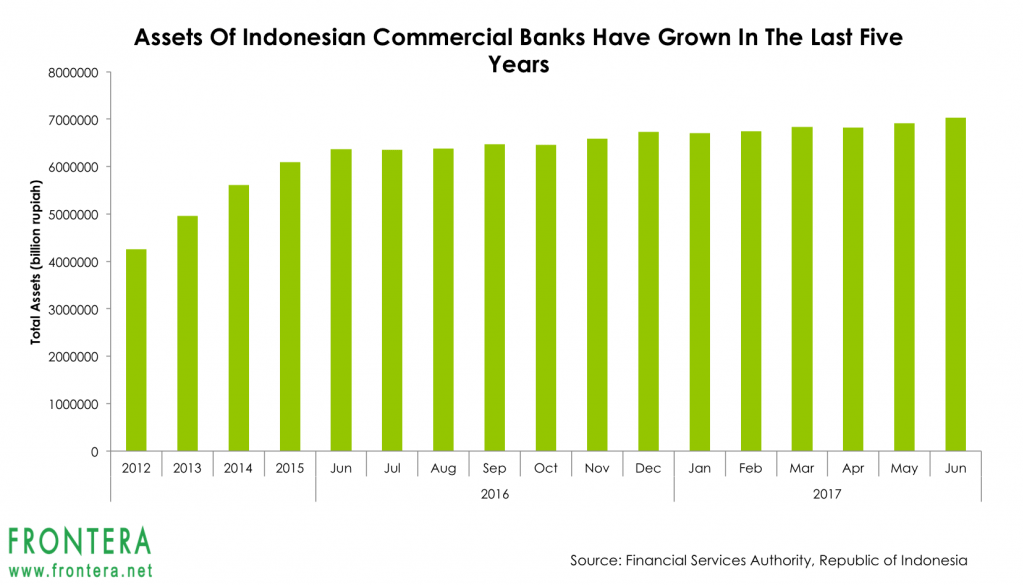 Total assets for the banking sector have also risen nearly 4 fold in the last 10 years. Experts expect total assets for Indonesian banks to double over the next 10-15 year period as the economy continues to grow and banking penetration deepens. 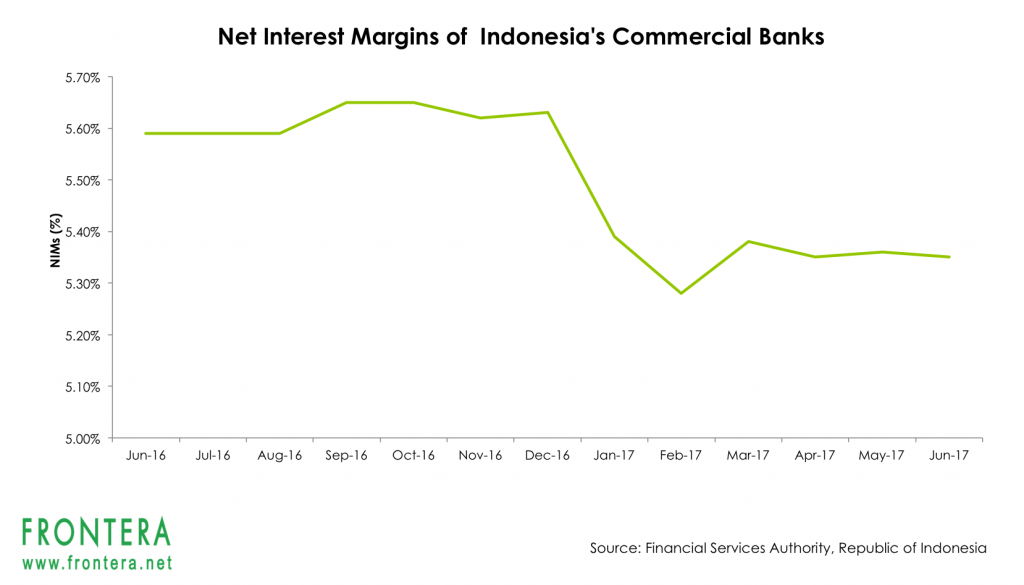 Currently, Indonesia’s banks are among the most profitable in Southeast Asia, with commercial banks reporting net interest margins of 5.4% in June 2017, the highest levels among emerging markets. 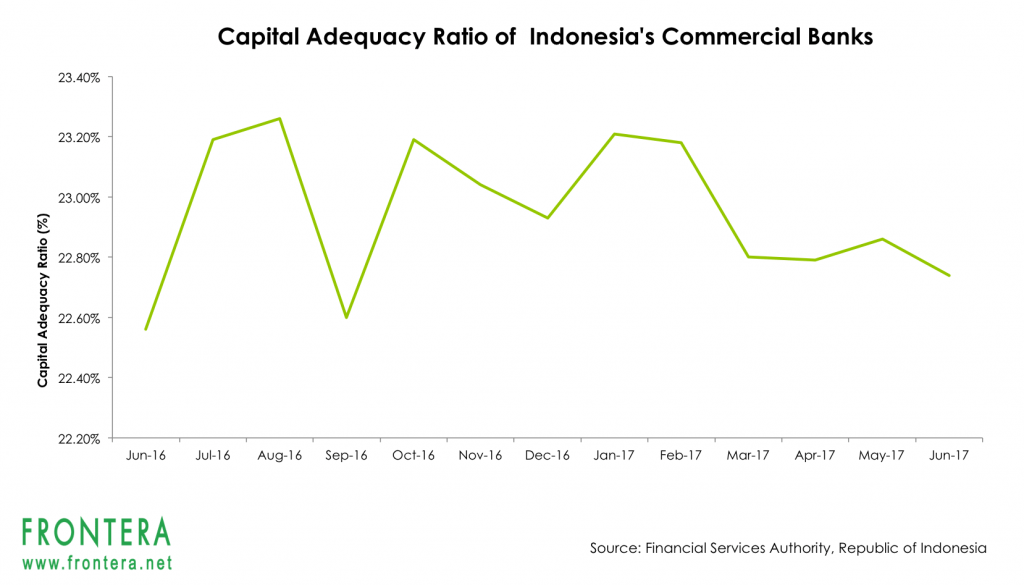 The average capital adequacy ratio (CAR) of Indonesia’s banks also remains significantly higher than the regulatory requirement of 8%. Since 2015, the CAR of Indonesian banks has remained above 20%, and was 25.1% in June. 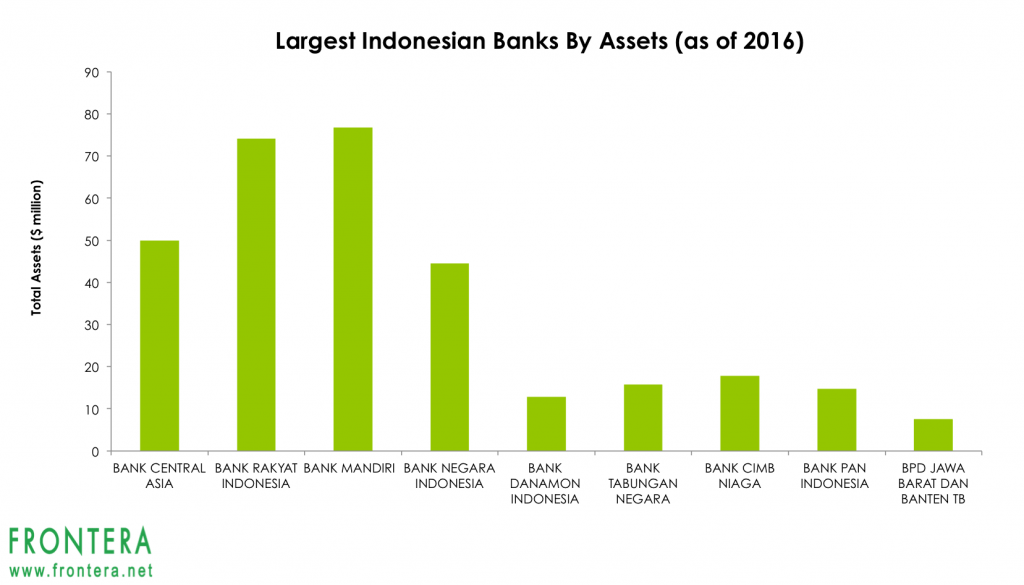 The three largest Indonesian banks by assets are Bank Mandiri, Bank Rakyat Indonesia . and Bank Central Asia. In 2016, these banks held assets worth $76.7 billion, $74.1 billion, and $49.9 billion respectively. Currently, shares of these banks have market caps of $23.2 billion, $27.9 billion and $35 billion, on the Jakarta stock exchange.

Bank Mandiri is the largest Indonesian bank by assets and the third largest in terms of market cap. In 2016 the bank reported assets of $77 billion, loans of $49.9 billion and deposits of $56.3 billion. 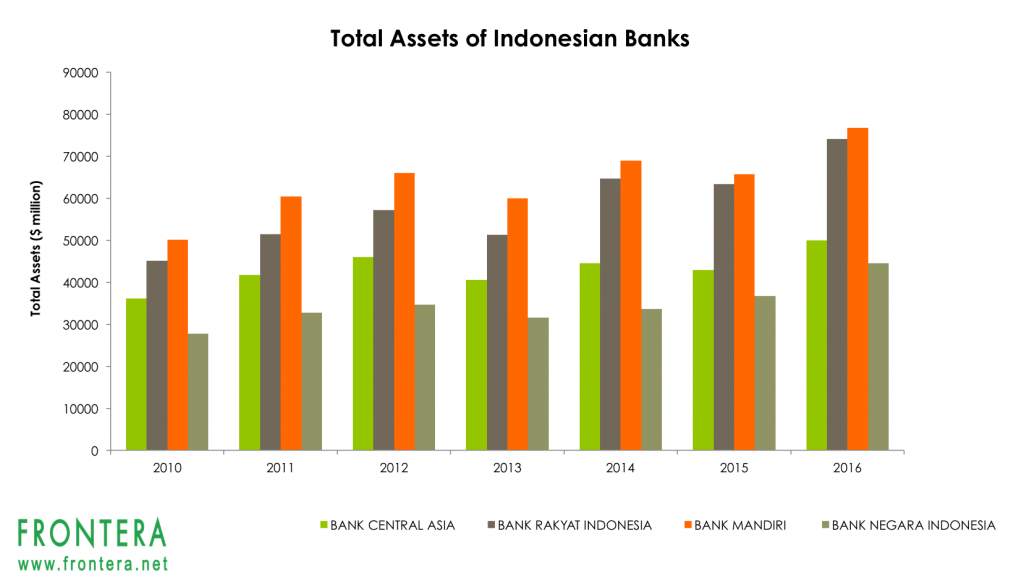 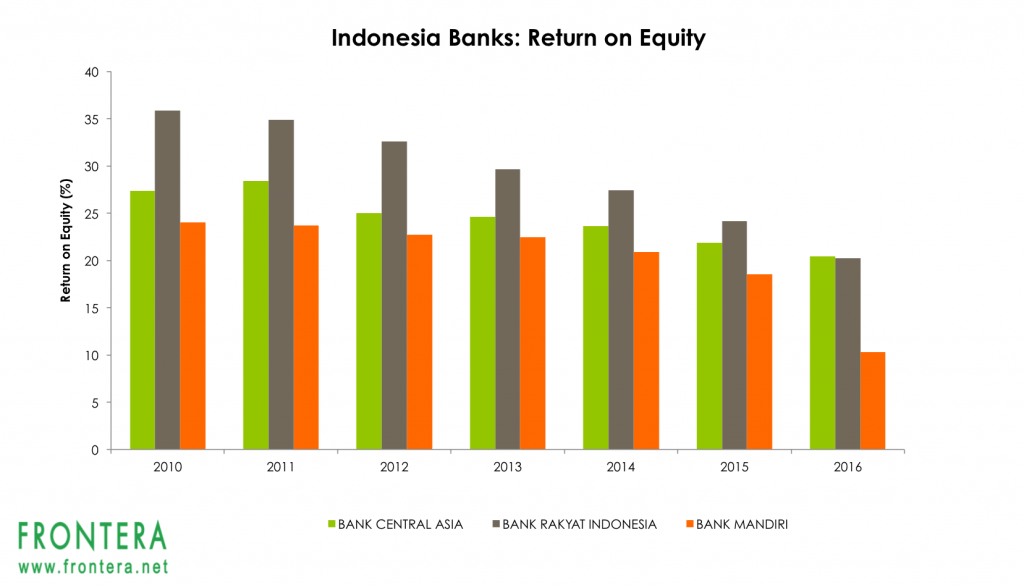 Bank Mandiri’s shares trade on the Jakarta, Stuttgart and Frankfurt Stock Exchanges with tickers BMRI.JK, PQ9.SG and PQ9.F. The bank also trades on the OTC Markets with ticker PPERY. The bank’s Jakarta listed shares have surged 17% in 2017 thus far. 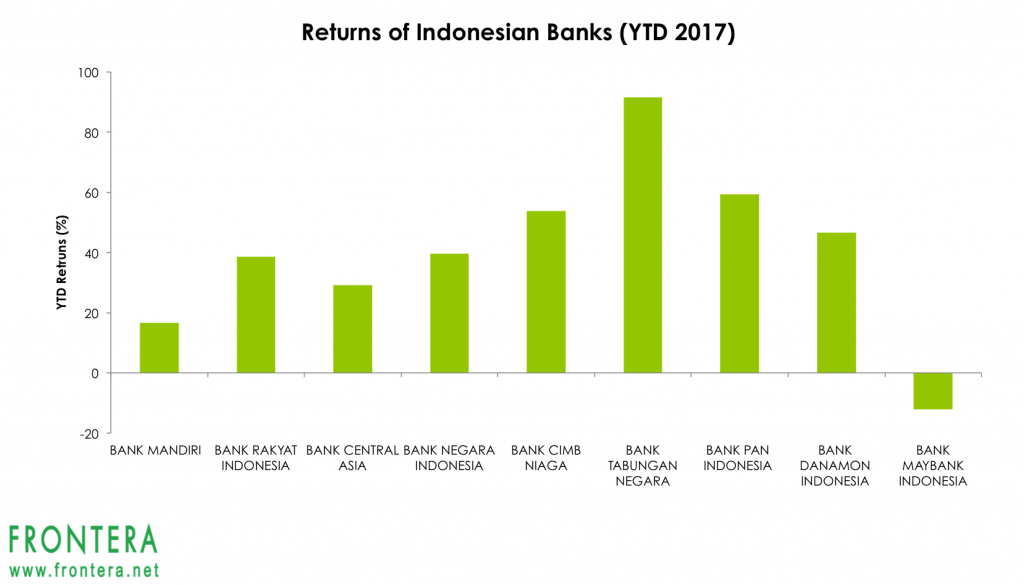 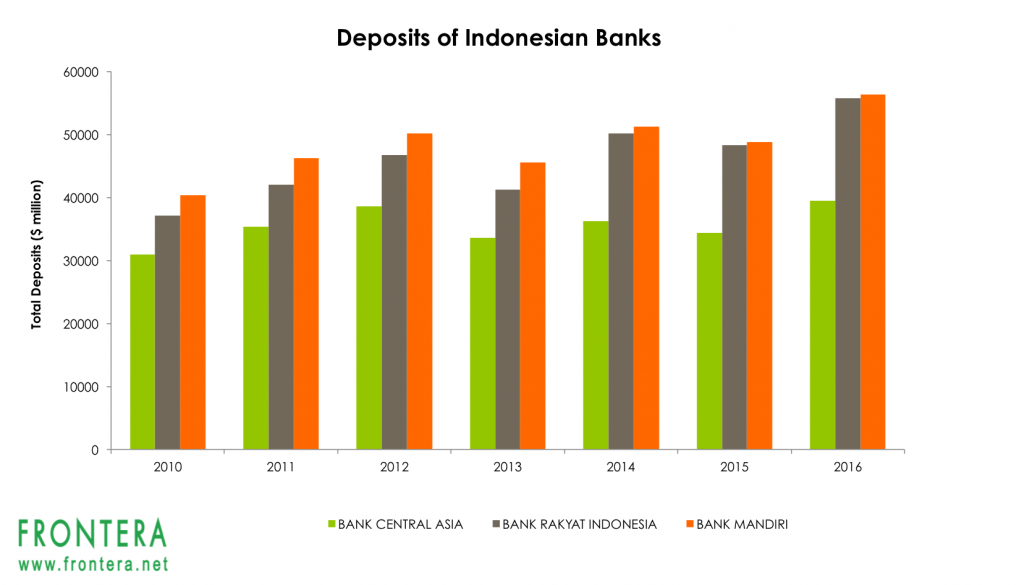 Bank Rakyat, formed in 1896, is one of the oldest Indonesian banks. Currently, the Indonesian government holds a 70% stake in Bank Rakyat. 30% of the bank’s equity was sold through an IPO in 2003.

Bank Rakyat specializes in the small-scale and micro-financing space and currently services 30 million retail customers through a wide network of 4,000 branches. 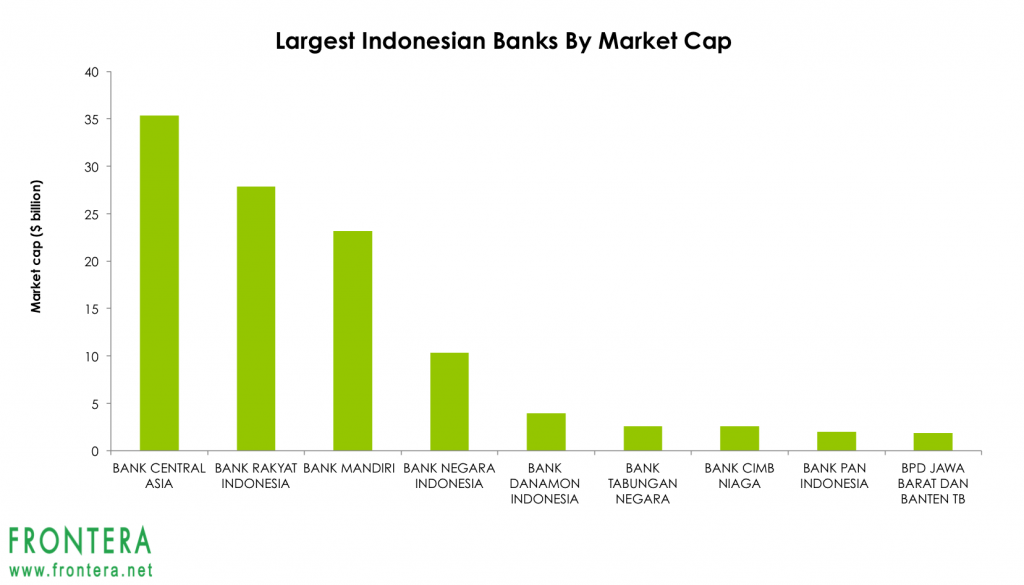 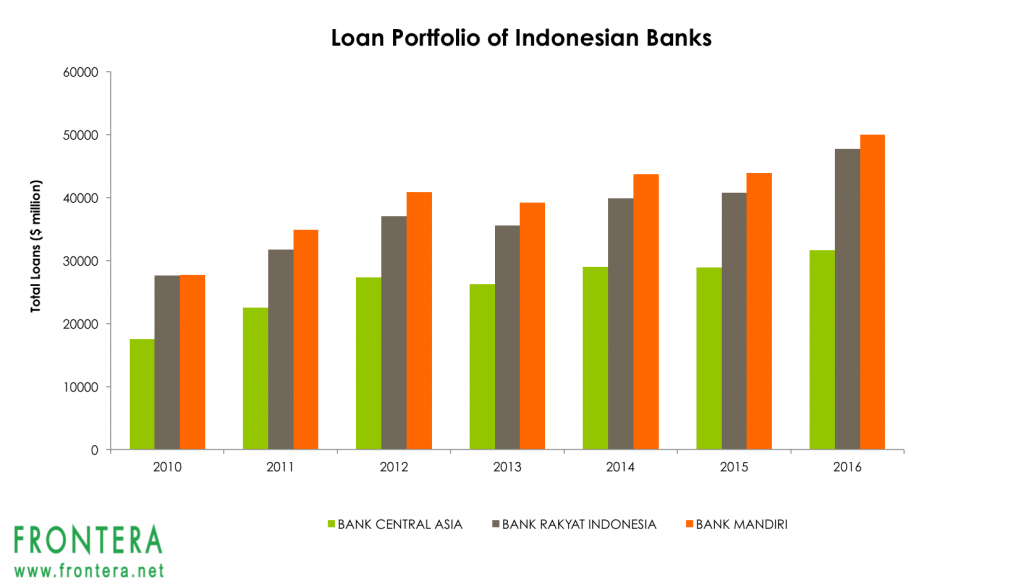 In 2016, Bank Central Asia generated revenues of $4.8 billion and net interest margins of 7.2%, highest among its peers. The bank reported return on assets of 3.2% and return on equity of 20.4%, making it the most profitable Indonesian bank. 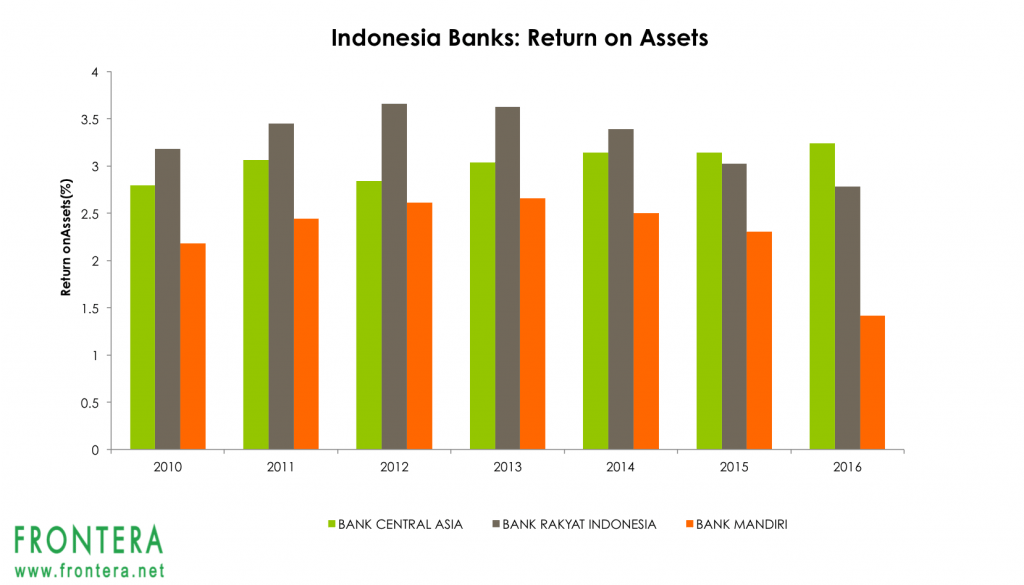 The bank’s shares are listed on the Jakarta Stock exchange and have gained 29% in 2017 to date. The company’s ADRs are also listed on the OTC Markets with the ticker PBCRY.

Indonesia’s banking sector currently trades at a huge premium to Indonesian equities after their superlative performance during the year so far. Jemmy Paul, investment director at PT Sucorinvest Asset Management said that current steep valuations of Indonesia’s banks are not justified and a correction is due amongst the local banks. “Banking stocks have rallied so much this year that it is hard for investors to expect more upside to them, especially with the not-so positive outlook and the rich valuation,” he stated. “Prices have to come down from what they are right now for me to put in more money to the banking stocks.” 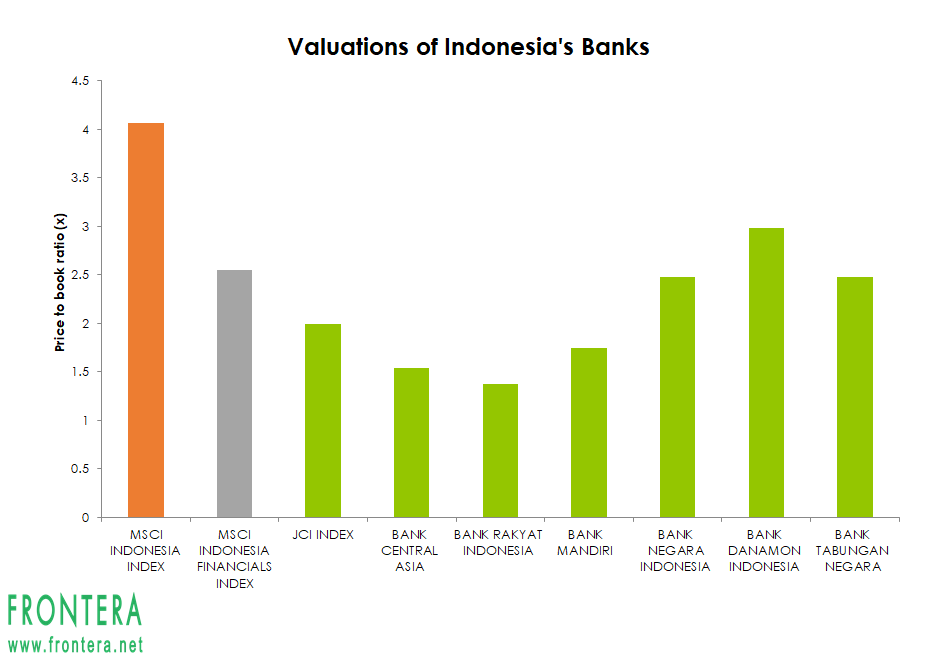 Bank Qnb Indonesia, Bank Bumi Arta, Bank Artha Graha Internasion, and Bank Artos Indonesia are the most attractively priced banking stocks based on their cheap valuations. These stocks have price to book ratios of 0.1x, 0.3x, 0.4x and 0.5x are trading at the steepest discount to their peers. Meanwhile, Bank Rakyat Indo Agroniaga, Bank Central Asia, and Bank Pembangunan Daerah are currently expensive with price to book ratios of 4.8x, 4.1x and 3.9x respectively.

Major Indonesian banks have seen a number of downgrades over the past few months. Bank Central Asia was downgraded by Bahana Securities and CIMB Group after the bank’s recent outperformance. Currently, the bank has 17 hold ratings, 16 buy ratings, and 3 sell ratings.

Bank Rakyat Indonesia was also downgraded twice in August after the bank’s shares gained nearly 30%. Presently, the bank is rated buy by 21 analysts, hold by 9 analysts and sell by 5 analysts.