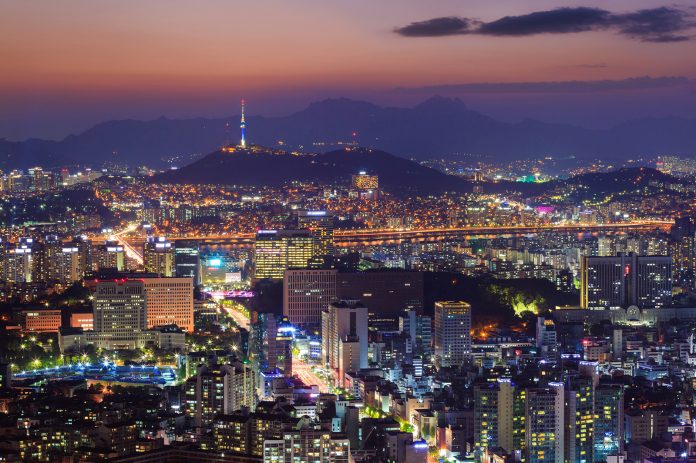 US President Donald Trump tabled the threat of a withdrawal from the free trade pact with South Korea in early September, a move that could worsen economic tensions in the region. Since Trump came into office, the government has been pushing to renegotiate the U.S.-South Korean trade agreement known as “KORUS”. Renegotiating existing free trade agreements were a key agenda for Trump during his election campaigns. Trump has argued that the “KORUS” agreement a disastrous deal for the American economy.

Tami Overby, senior vice-president of the US Chamber of Commerce, took a public position that withdrawing from the KORUS agreement would result in negative implications for the United States. “The U.S will lose significant market share to the EU, Australia, China and others while sending a very dangerous message that America is not interested in doing business in Asia,” he said. 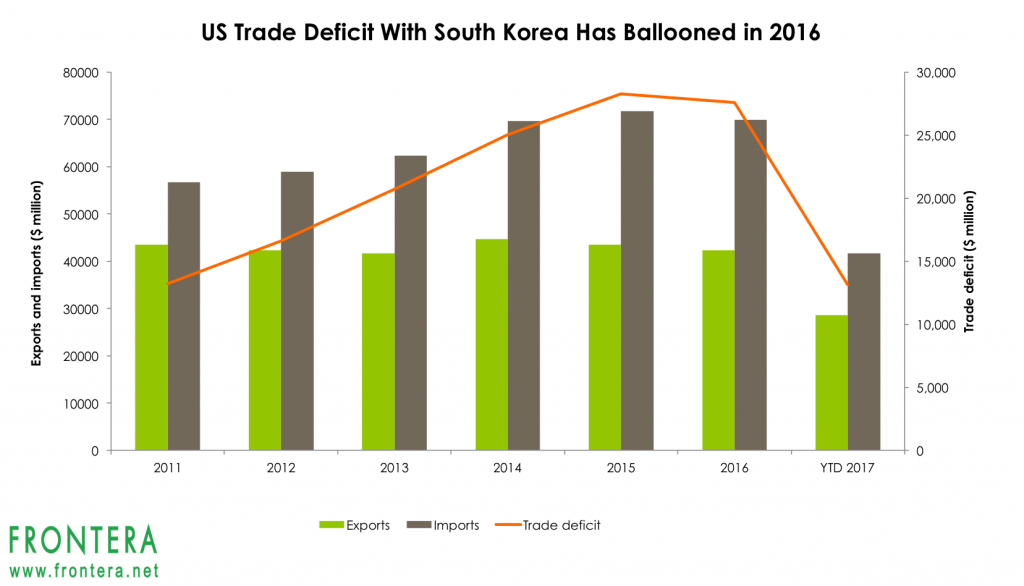 The U.S. Trade Representative claims the KORUS agreement is responsible for this deficit but this is not clear. Furthermore the deficit number refers to trade of goods but not services where the U.S. has a trade surplus with South Korea. The United States had a services trade surplus of $10.7 billion with South Korea in 2016. Furthermore, exports of electronics that form the largest chunk of exports to the US were already tax-free prior to the KORUS. 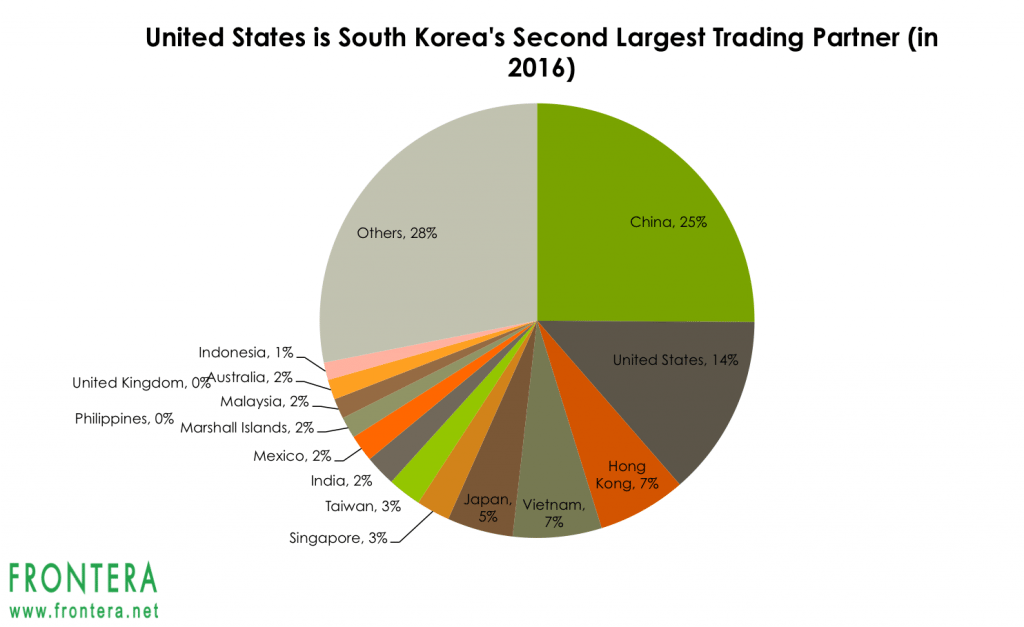 Sectors and stocks to watch 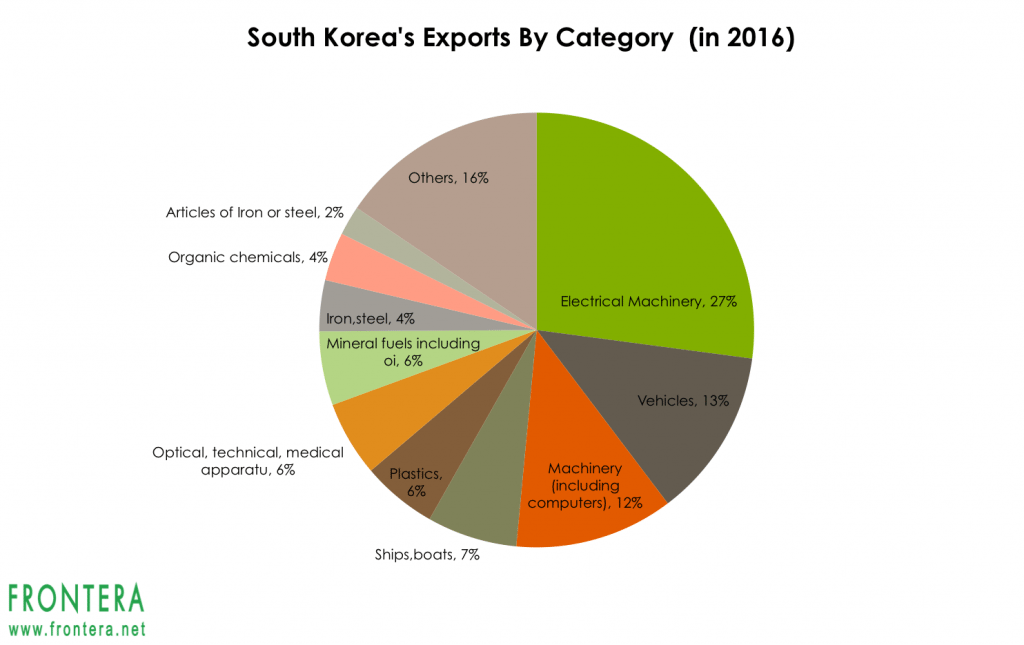 In 2016, 90% of the trade deficit between the United States and South Korea came from the auto sector. South Korea was also the largest supplier of steel to the US through the first seven months of 2017, sending nearly 2.3 million net tons.

If Trump decides to withdraw from the free-trade agreement, it would adversely impact the export businesses of companies in the auto, metals and electronics sectors. 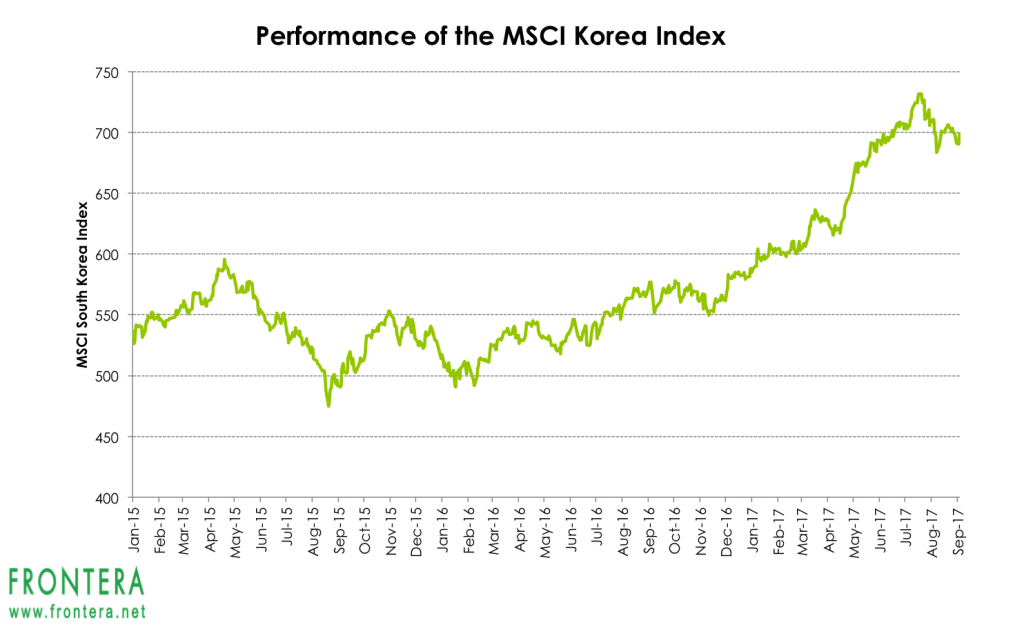 Year to date, the MSCI South Korea Index has surged 20.3% while the iShares MSCI South Korea ETF (EWY) has gained 26.4%. Comparatively, the Korean benchmark KOSPI Index has returned 15.7% in the year so far. In the last one month however, these indices have lost between 2-3% amid military tensions with North Korea and rising possibility of the US withdrawing from the KORUS trade pact. 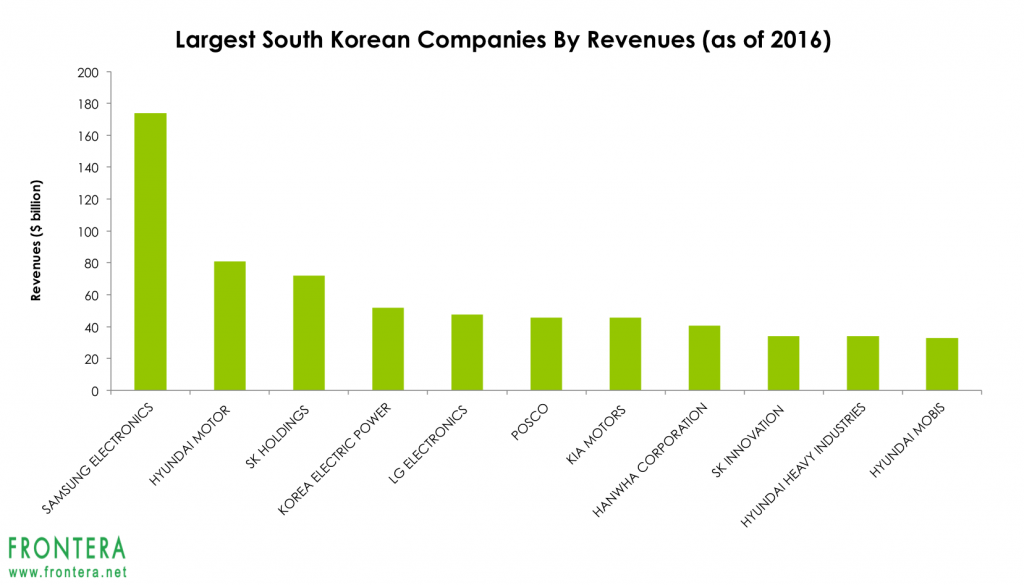 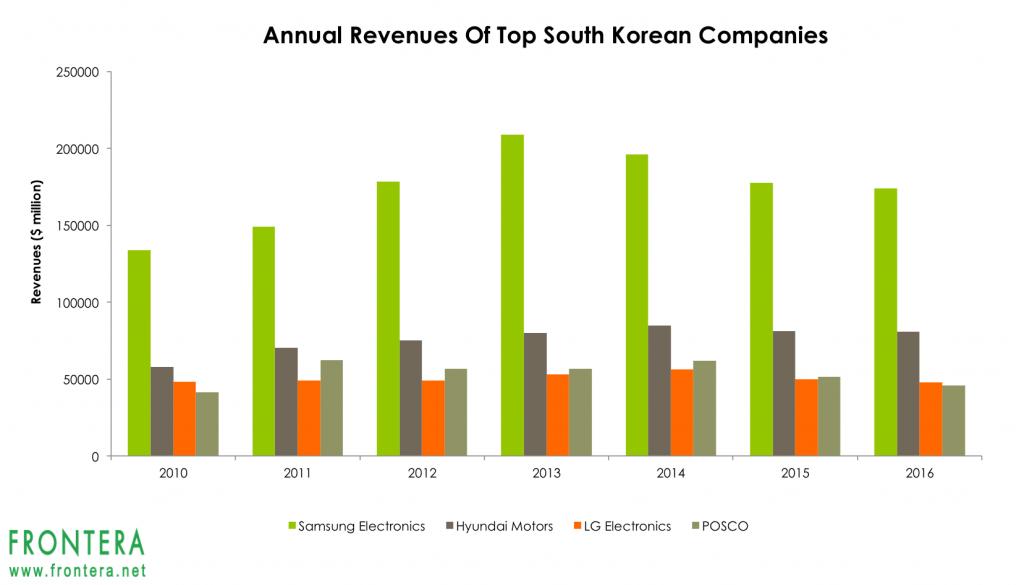 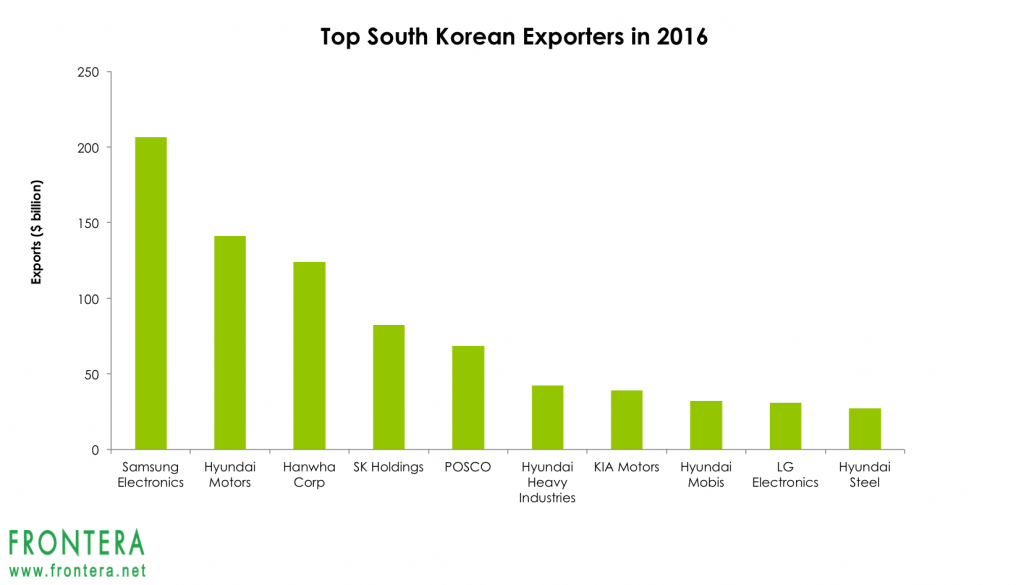 Now, let’s take a look at some stocks that generate significant portions of their revenues from the United States and will be most impacted in case of withdrawal of the free trade agreement.

In 2016, Samsung Electronics generated nearly one-third of its revenues from the United States. The company’s sales to the United States increased to $60.2 billion, and constitute 34% of its global revenues of $174 billion (200.7 trillion won). The company’s 2016 Sustainability Management Report highlights the growing importance of the US for Samsung’s operations. Sales in the US as a proportion of its worldwide operations inched up to 34% in 2016, up from 33% in 2014, and 30% in 2013 due to rising demand for its smartphones in the country. 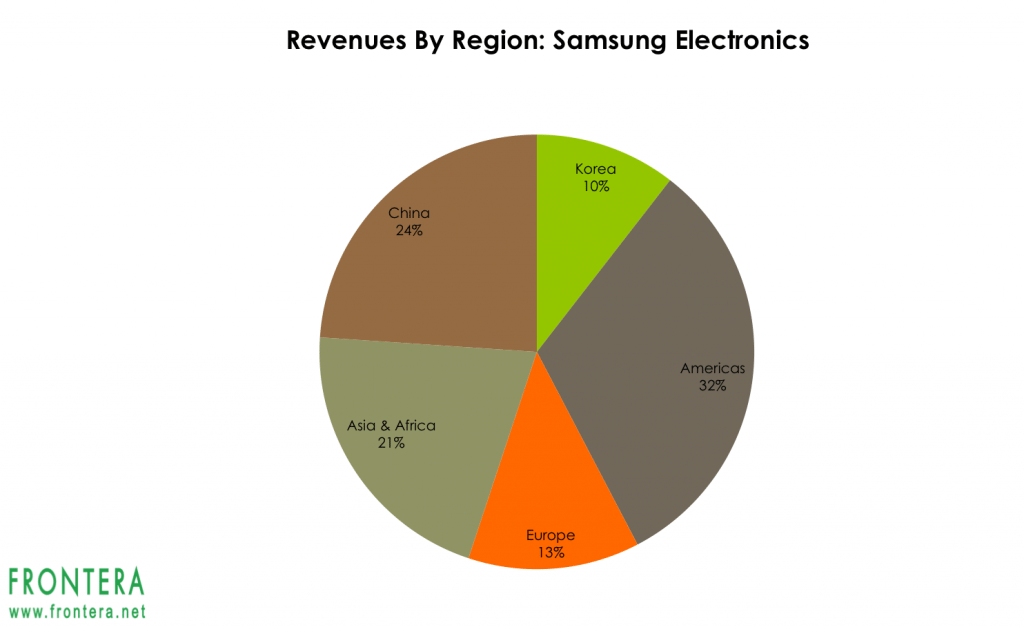 Samsung is also the largest South Korean company in terms of market cap and revenues and the Americas are the largest market for the company’s products. In 2016, the company generated revenues of $37.6 billion (42.6 trillion won) from this region. Samsung has a market cap of $264 billion and is heavily weighted in all ETFs and indices representing South Korean equities. Samsung is also currently the largest IT company in the world by revenues, just above Apple (AAPL).

Samsung is the world’s largest manufacturer of mobile phones and smartphones in terms of sales and among the largest supplier of electronic components such as lithium-ion batteries, semiconductors, chips, flash memory and hard drive devices. In July 2017, the company also surpassed Intel to become the largest semiconductor chipmaker. The company also supplies components to its competitors such as Apple, Sony, Nokia, HTC and LG. Apart from tech, the company is also among the largest home appliances manufacturer in the world and since 2006, it is the largest television maker in the world as well.

However, Samsung has witnessed two major crises over the past 12 months. Last year, Samsung faced scrutiny over the withdrawal of its Galaxy 7 smartphones after reports of its batteries catching fire. More recently, the company’s heir Jay Lee was jailed over an allegation of bribery. Neither of these scandals seem to have hurt Samsung’s share price though. The stock has soared over 30% in 2017 thus far, outperforming the South Korean stock market. However, rising tensions with North Korea and the possibility of tax hikes might hurt the company’s exports. 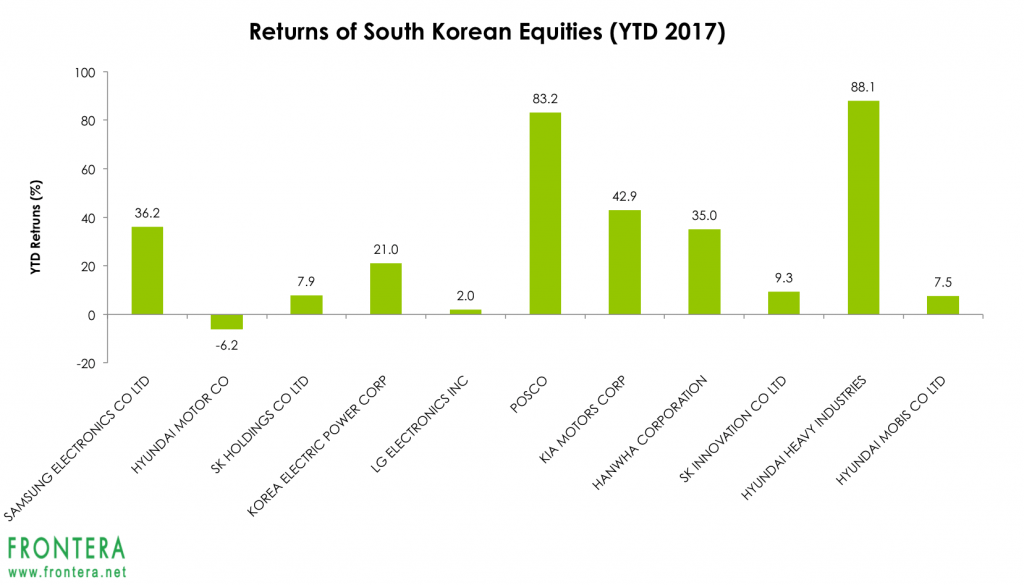 Hyundai Motors is the third largest vehicle manufacturer in the world and the largest in South Korea. The company produces more than 5 billion vehicles a year in nearly 193 countries across the world. 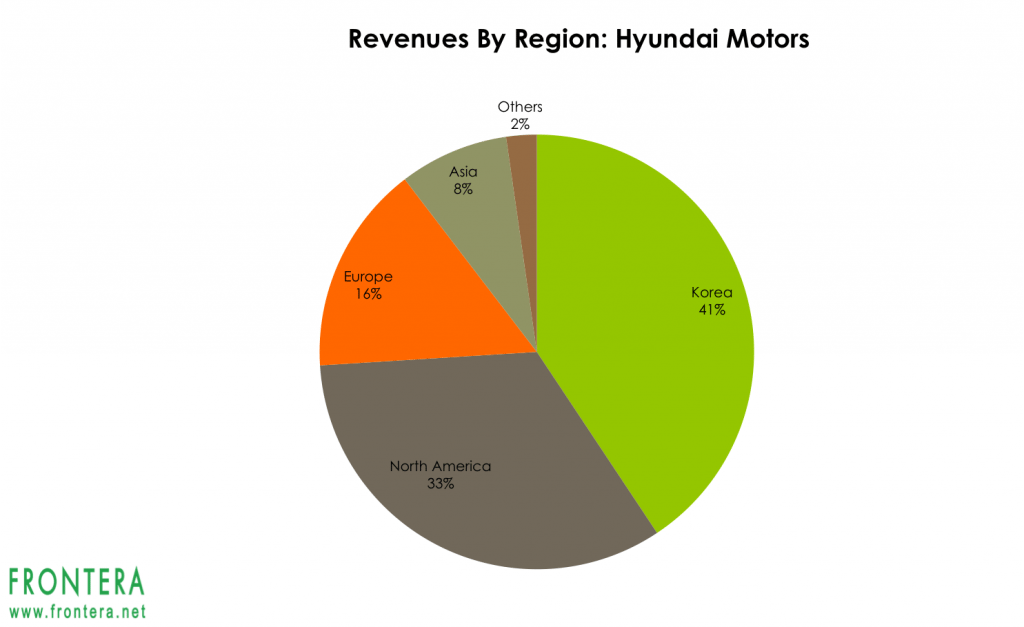 Hyundai along with its subsidiary Kia Motors operates two plants in the United States and plans to open one more. The company also plans to make additional investments of $3.1 billion in the US over the next five years. All these moves come amidst speculations that Trump might impose higher tariffs on vehicles imported from South Korea or Mexico.

Companies like Hyundai Motors or Kia Motors (KIMTF) are most at risk in case of withdrawal from the KORUS trade agreement, as their vehicles would become more expensive in the US, thus making them uncompetitive compared to domestic manufacturers.

Further, the company also faces risk in China, its largest export market backed by geopolitical tensions related to the THAAD missile. Media reports suggest that Chinese automaker BAIC motors maybe terminating its partnership with Hyundai as South Korea completes installation of the THAAD missile system. “Since the company’s sales in China have been doing quite well, investors seem to believe that the current situation will do take a toll on the company severely,” said Lee Sang-Hyun, a stock analyst at IBK Securities.

Korean based LG Electronics and Samsung are the largest players in America’s home appliance market in terms of sales values. LG also has a 20% share in the smartphone market in the United States, and is on the third position just behind Apple and Samsung. In the first quarter of 2017, LG sold 7.6 units of smartphones in the country, it’s highest till date. 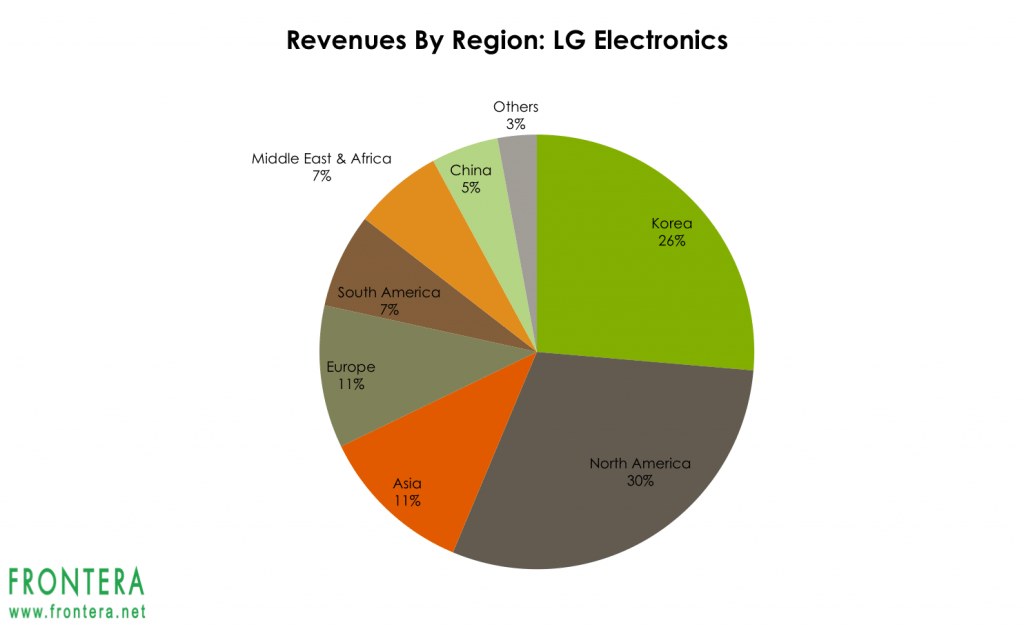 LG Electronics is the eighth largest exporter from South Korea, with exports worth $31 billion last year. Last year, the company reported sales of $48.9 billion (55.4 trillion won), of which 30% came from the North American region.

Shares of LG are listed on the Korean, Stuttgart and Frankfurt Stock Exchanges with tickers 066570.KS, LGLG.SG and LGLG.F. The company’s shares are also listed on London OTC Markets. In Korea, the company has a market cap of $12 billion, and its shares have gained 2% YTD underperforming the market. 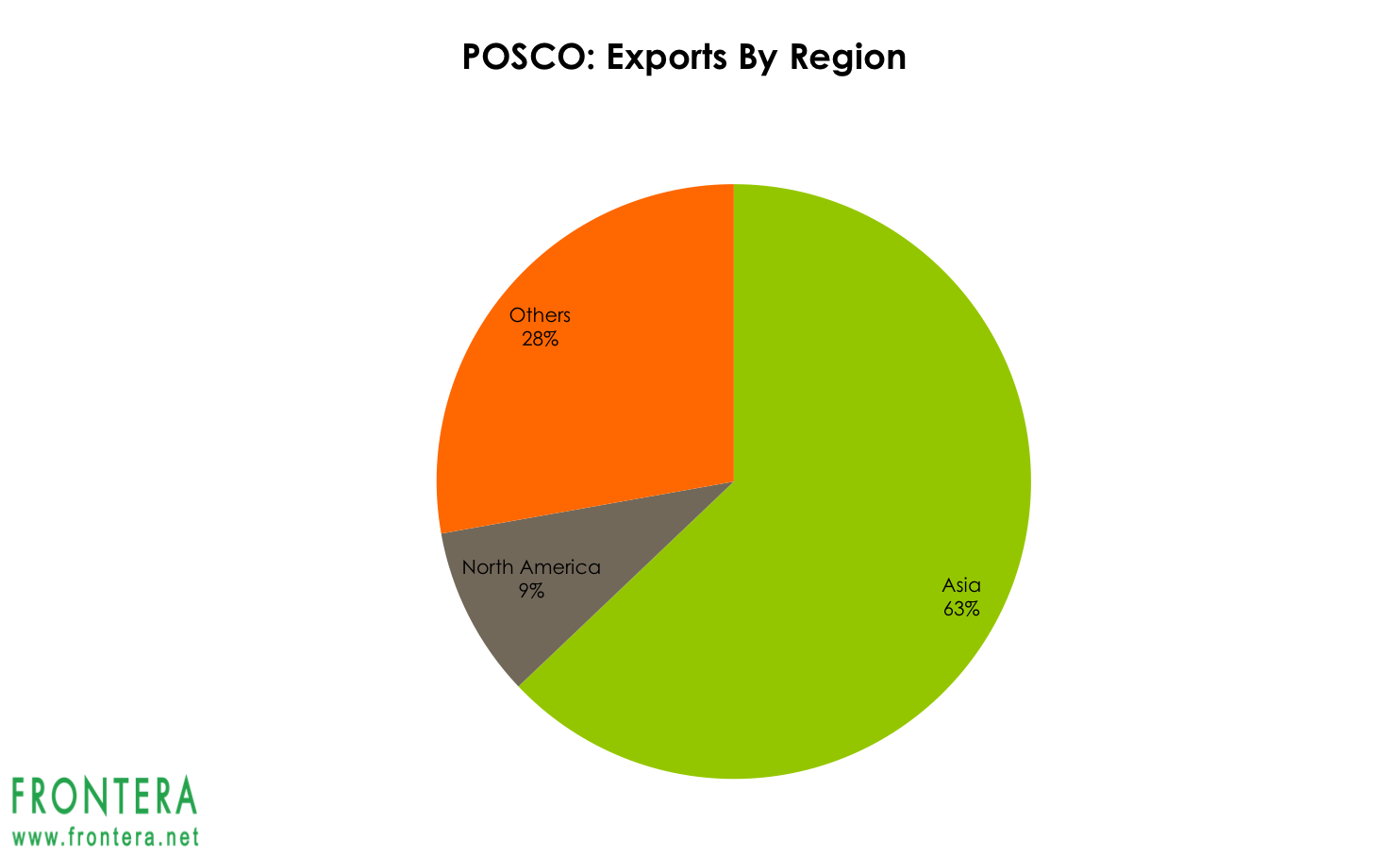 Chief executive of POSCO recently expressed his views on risks coming from the US in case of protectionist measures. “The emerging new trend is that some advanced countries are leaning towards protectionism, as the global economy is deteriorating,” POSCO CEO Kwon Oh-Joon stated in a letter to employees. “Should trade regulations spread to POSCO’s major markets such as Southeast Asia, our exports will suffer a major setback,” he said in the letter. The comments follow after the United States has imposed anti-dumping duties and fines on steelmakers from China and South Korea.

Korean steel makers such as POSCO and Hyundai Steel are at risk to export their products to the United States as the country moves to restrict steel imports by imposing trade barriers in the form of tariffs. 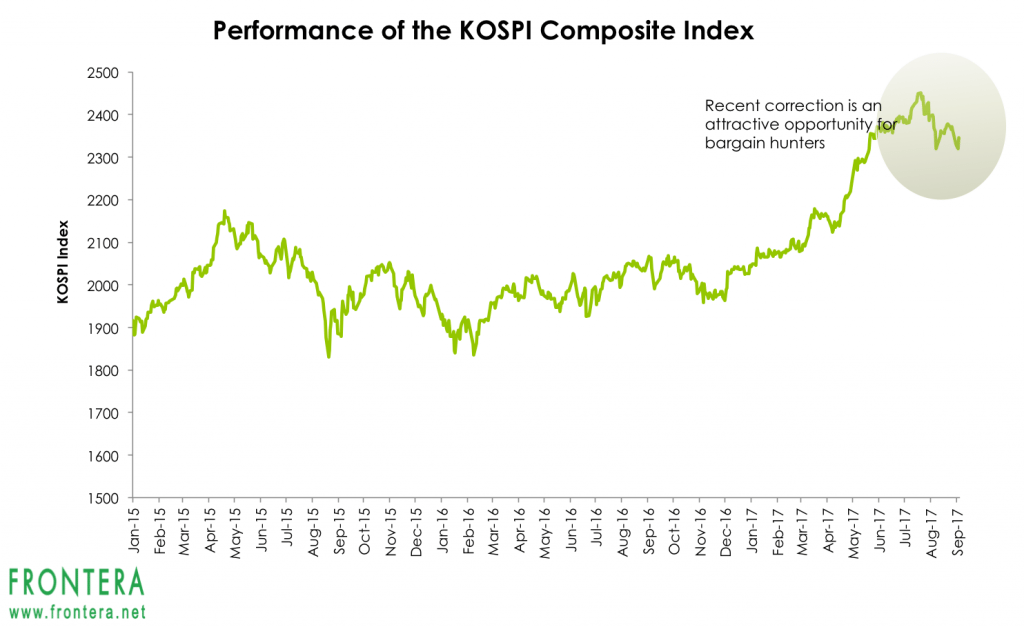 Analysts believe South Korea’s equities have been under pressure from geopolitical tensions in the region as well as the possibility of tax hikes in case of Trump’s withdrawal from the free trade agreement. However, they believe South Korean stocks are attractively valued and investors should take advantage of the correction.

“Generally, investors agree that the sharp correction in Korean tech was partly driven by geo-political tensions and uncertainties from proposed tax policy changes. Capex increases by the major Korean DRAM and NAND makers also played a role. … confidence has returned as memory semi prices are tracking higher and [the] Apple (AAPL) supply chain prepares to increase component volume purchases. Interest in LGD is rising as the more comprehensive OLED strategy has been revealed.

We maintain Outperform on Samsung Electronics (005930.SK) as upward earnings revision should continue with stronger DRAM and NAND pricing outlook for the rest of 2017. Despite our Neutral rating on LG Display (LPL and 034220.SK), we note that valuations are approaching trough value and possibilities exist for a rerating if OLED execution bears fruit. LGE remains a consensus short ..” they mentioned in a release to investors.

HSBC analyst Ricky Seo thinks Samsung’s valuation still looks attractive. He expects return on equity to rise to 19% up from 13% in 2016. Seo expects Samsung’s earnings to be driving by rising prices of memory chips. The analyst has assigned a buy rating on the stock and target price of 2,600,000 won, which implies 11% upside. YTD, shares of the company have gained 37%.

Nomura Securities’ Angela Hong advises investors to stay away from South Korea’s auto sector as it most at risk to rising taxes post withdrawal of the KORUS trade agreement. In a note to investors, she highlighted Hyundai Motors’ falling margins in the US in the first quarter of 2017. She stated, “HMC’s exports fell 4% y-y, despite increased working days in Korea. While the weak export volume was partly due to the continued production line adjustment in Korea for 2H17 exports of the Creta model, we think the recent expectation of an EM demand recovery has yet to be proven. On the other hand, we remain cautious about the company’s deteriorating US margin, given it increased average incentives by 12% y-y in February but retail sales were just flat.

We stay cautious on the Korean auto sector, in light of increasing competition in the US and China as well as uncertainties on the cross-border tax.”

HSBC analyst Brian Cho is bullish on POSCO’s earnings. Cho has a buy rating on POSCO with a 360,000-won share target price, which implies 5% upside. In 2017 so far, shares of POSCO have already surged 83%. 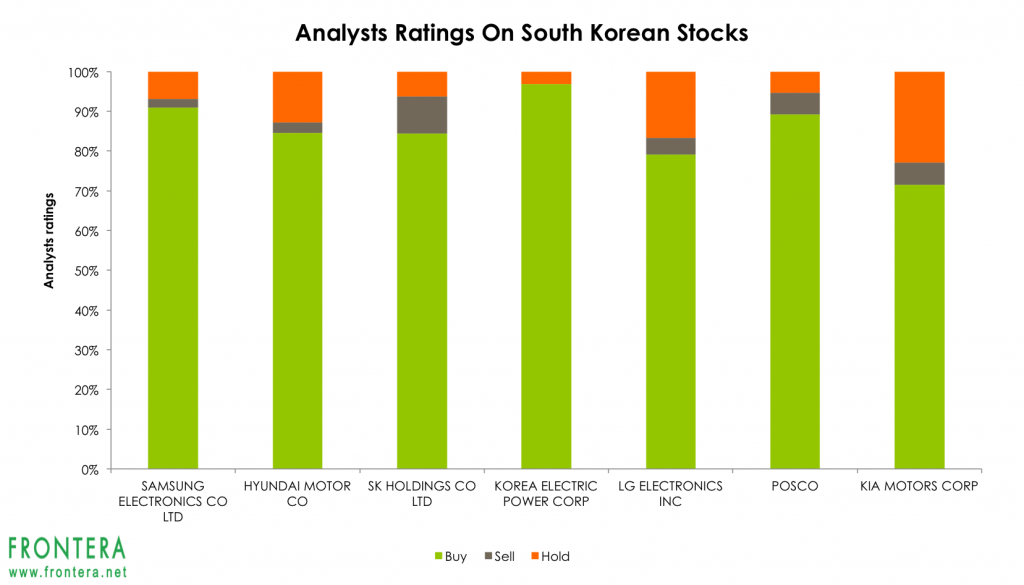 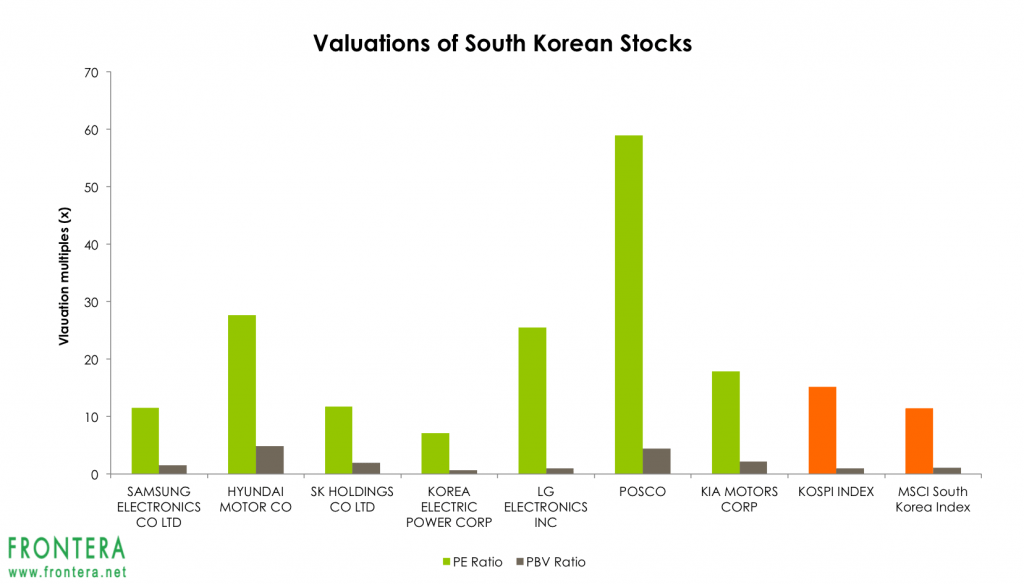 Currently, Samsung Electronics trades at 11.5 times forward earnings and 1.5 times book value, while LG Electronics trades at PE of 25.4x and price to book ratio of 0.9x. POSCO’s shares at 4.4 times book value and 58 times forward earnings are expensive as they have rocketed 83% already in 2017. Meanwhile, Hyundai Motors at PE of 27.7x and PBV of 4.8x is also expensive.

5 Stocks To Ride On The South Korean ‘K-Wave’

How Critical Is The ‘K-Wave’ to South Korea, And Can It Grow Beyond China and ASEAN?