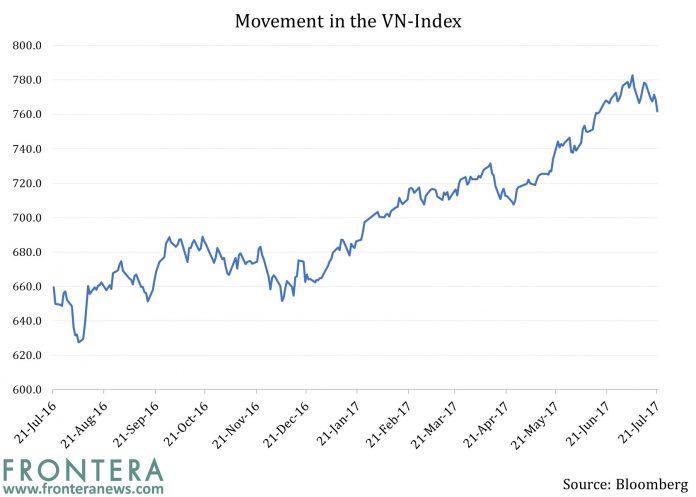 This is post 4 of 4 in the series “What Signal Does Vietnam’s Rate Cut Send to Investors?”

Vietnamese equities have done quite well in the past year as shown by the graph below which plots the movement of the VN-Index. In Vietnamese dong terms, the index has returned over 15% in the period. 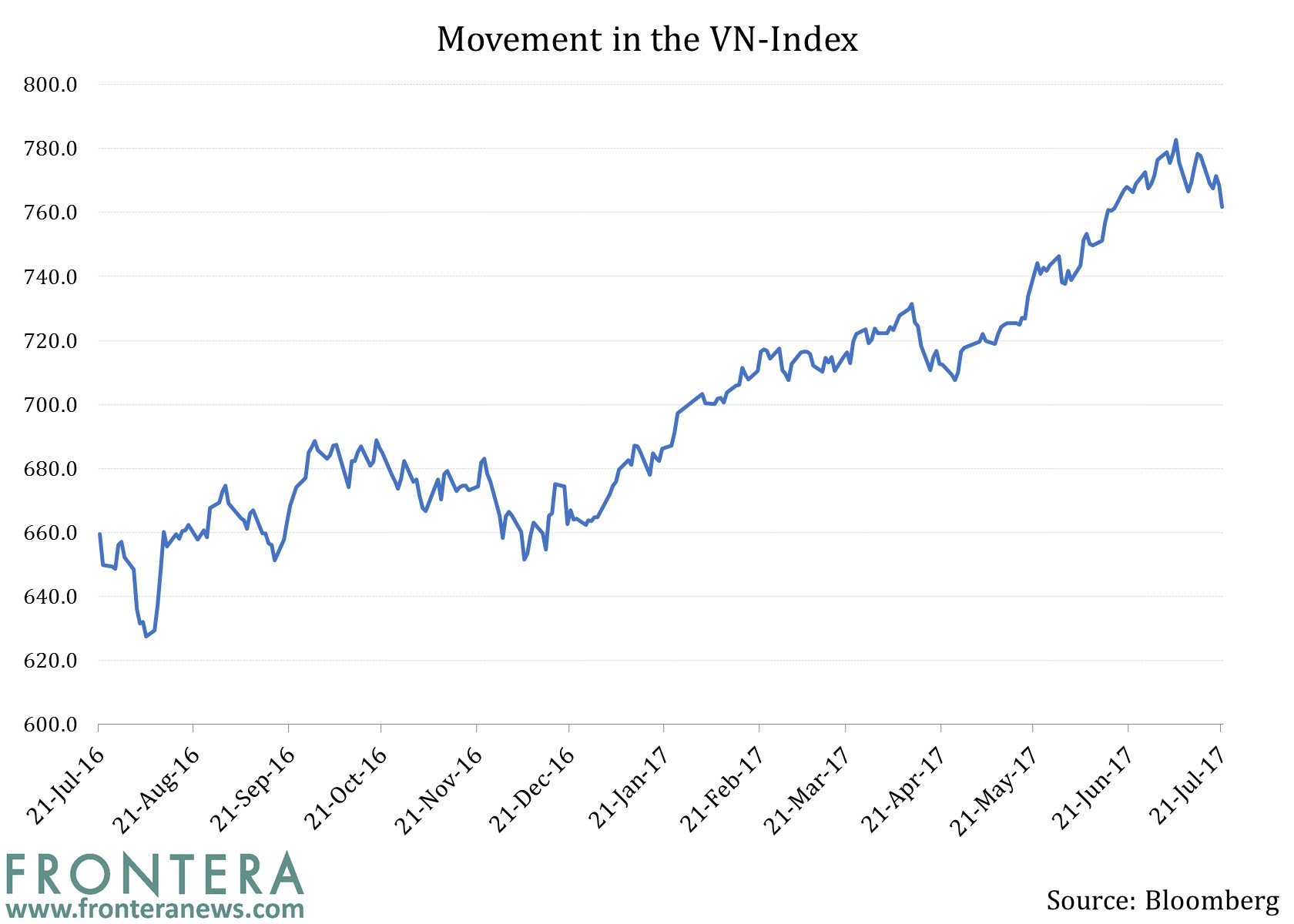 For US investors, the VanEck Vectors Vietnam ETF (VNM) is the sole instrument which provides a broad-based exposure to Vietnamese equities. The fund has returned 11.5% in YTD 2017 until July 24.

Consumer staples has led positive sectoral contributors, followed closely by financials. In terms of portfolio weight, the situation is reversed. Meanwhile, industrials has been the third biggest contributor even though it is not among the top five sectors by weight.

US investors do not seem too keen on VNM compared to other emerging market options as the $300 million fund has seen less than $10 million in net inflows in YTD 2017, according to Bloomberg data. The graph below plots the investor flow to the fund in the period. 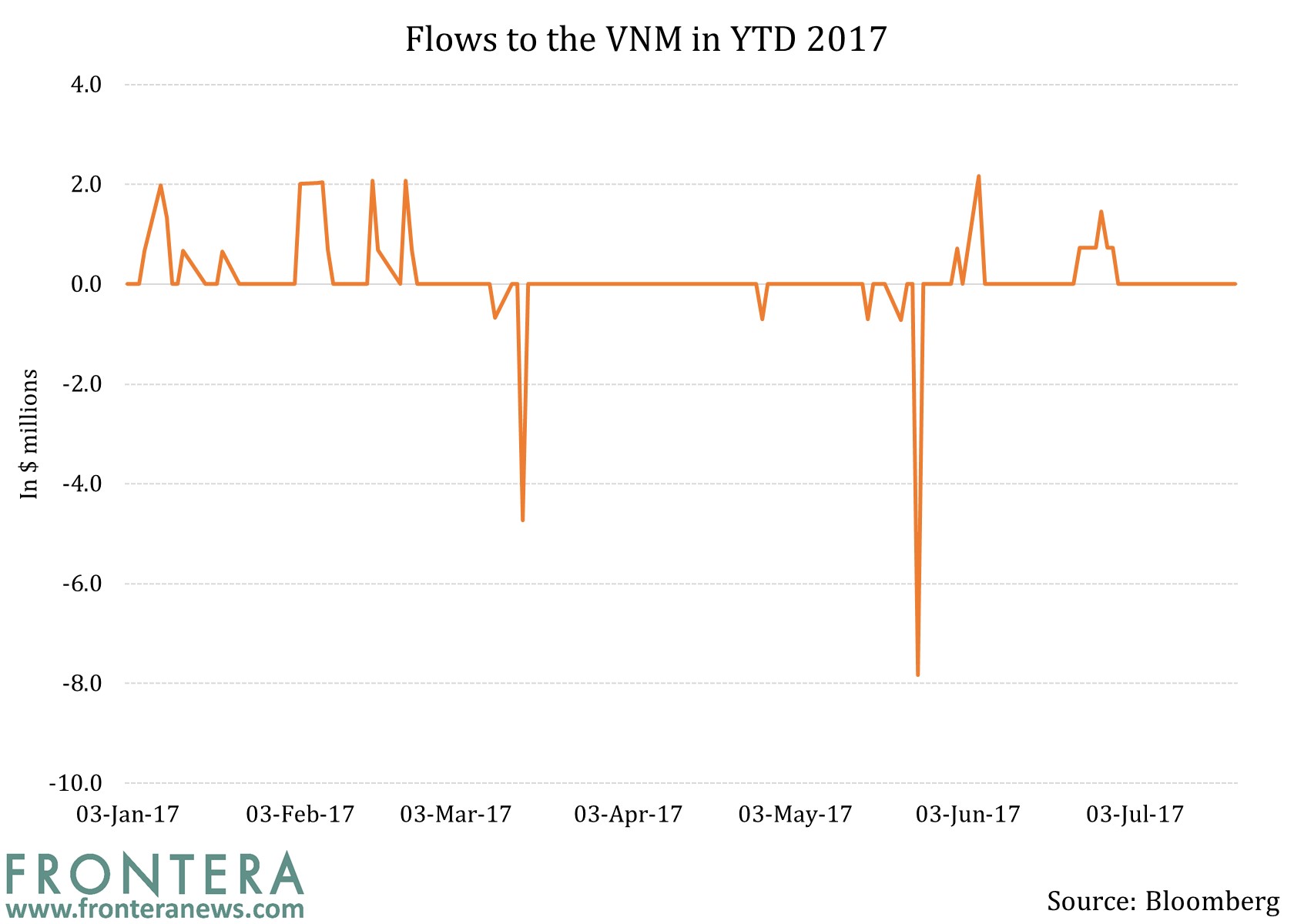 The interest has increased this year, though, as in the one year period until July 21, the fund had witnessed net outflows amounting to ~$40 million.

This indicates that Asian nations are taking more interest in Vietnam’s story than their US counterparts, an assertion supported by a large section of market participants.

One of the reasons is that the VNM is not exactly cheap with a price-to-earnings ratio of 18 according to the fund house’s website.

Is there any reason for US investors to be excited about Vietnamese equites?

Financials could be one reason given the proposed restructuring of credit institutions and plans to deal with bad debt as seen in the previous article of this series. However, there are caveats. Vietnamese banks which have seen a jump in profits but have bad debts to settle may find their stocks struggling.

However, if credit institutions and banks deal with their old non-performing loans well under the resolution scheme, then their stock prices can rise once their books have been cleaned.

This benefit can flow to other sectors like real estate, which can see a revival of idle projects.

Foreign investors in general have taken a liking to Vietnam’s growth story.

According to data from the country’s State Securities Commission, the total net purchase of foreign investors on Hanoi and Ho Chi Minh City bourses in H1 2017 soared to 9.2 trillion dong ($400 million). This is higher than the 8 trillion dong record made in the first seven months of 2008, according to a report by VietNamNet Bridge.

The report also mentioned that Huynh Minh Tuan from VnDirect Securities expects that “foreign capital will break the 16 trillion dong record in 2010.”

It remains to be seen whether US investors get in on the action.

This is post 4 of 4 in the series “What Signal Does Vietnam’s Rate Cut Send to Investors?”