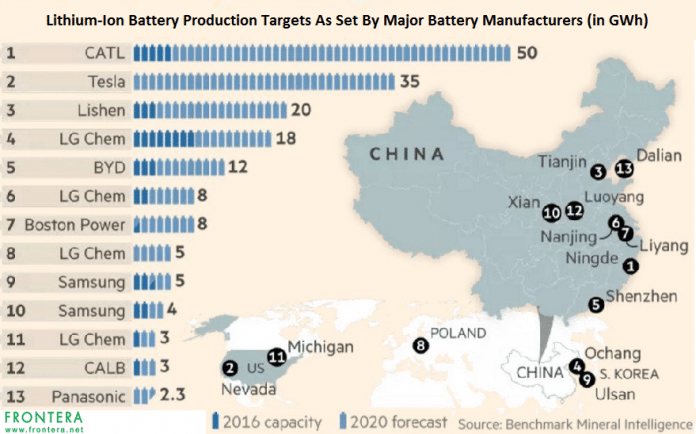 Chinese and Korean EV batteries makers are poised for growth 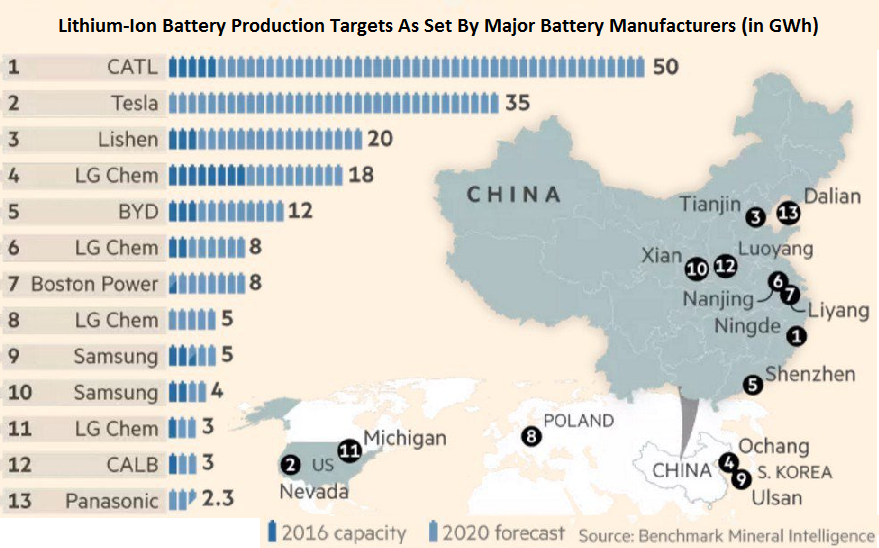 Chinese batteries makers are already working towards high targets set for 2020 with notable government support. According to Bloomberg New Energy Finance estimates, if Chinese batteries makers deliver on their targets, the economy should be in a position to produce 121 GWh (gigawatt hours) of battery power by 2020; enough to charge over 4.8 million electric cars to each travel 100 kilometers.

On the other hand, South Korea’s three leading EV battery manufacturers, LG Chem, Samsung SDI and SK Innovation, have together pledged to invest a combined $1.77 billion to expand EV and hybrid battery production capacity in South Korea by 2020. With domestic demand limited, these battery makers are expanding their global manufacturing footprints trying to cash-in on Europe’s fast-growing EV market.

In China, the list of EV batteries makers is led by BYD, CATL, and Tianjin Lishen Battery. BYD and CATL have seen particular benefit from government support.

BYD or “Build Your Dream” (1211.HK) (BYDDF) (BYDDY) is China’s largest battery maker. The company produced approximately 100,000 EVs or plug-in hybrids in 2016. Consistent with BYD’s strategy of vertical integration, the company currently has 20 GWh of battery cell capacity. The company’s target for 2020 is set at 34 GWh. Warren Buffet’s Berkshire Hathaway has a 10% stake in the company.

CATL or Contemporary Amperex Technology Ltd. focuses on the production of lithium-ion batteries and the development of energy storage systems. CATL currently has 7.7 GWh of battery capacity and plans to reach a battery production capacity of 50 GWh by 2020.

Tianjin Lishen Battery Co., Ltd. engages in the development, manufacture, and sale of lithium-ion batteries. The company plans to have 20 GWh of battery cell capacity by 2020.

To allow electric cars to go further on a single charge, a critical factor for batteries is their energy density. For now, China lags behind Korean makers in terms of the technology to provide greater energy density. South Korean companies have been involved in high-performance batteries manufacturing for over 15 years now, long before China got into it.

In South Korea, the list of EV batteries makers is led by LG Chem, Samsung SDI, and SK Innovation.

LG Chem or LG Chemical (051910.KS) (051915.KS) (LGCLF) is the largest Korean chemical company. The company is principally engaged in the manufacture of petrochemical materials. The company also provides lithim-iion batteries for laptops, phones and electric vehicles (EVs). The company has plans to start production at a newly-built EV battery factory in Poland which has a capacity to produce battery packs for 100,000 EVs per year, in addition to existing plants located in South Korea, China, and the USA.

Samsung SDI (006400.KS) (006405.KS) (SSDIF) manufactures and sells batteries worldwide. It manufactures and sells small-sized lithium-ion batteries of various kinds and uses, including automotive batteries. The company has completed the construction of a new EV battery plant in Hungary in May with an initial capacity to produce 50,000 EV battery packs per year. When operative (2018), the new plant will serve to strengthen Samsung SDI’s global EV production network which already includes facilities in South Korea and China.

SK Innovation (096770.KS) (096775.KS) is a Korea-based holding company principally engaged in the manufacture and distribution of petroleum products. It is Korea’s first and largest energy and chemical company, now also engaged in future energy. As an EV batteries maker, it is the smallest of the three in South Korea. Nonetheless, the company’s South Korean production capacity is estimated to rise to about 150,000 EV battery systems per year.

What remains to be seen is how the above listed Chinese and Korean EV batteries makers will fair compared to their Eastern and Western competitors. In the East, established Japanese batteries makers such as Panasonic, AESC, and GS Yuasa (GYUAF) stand in competition, and in the West, industry giants such as Johnson Matthey (JMPLY) (JMPLF), Bosch, and Johnson Controls (JCI) are also vying to become major suppliers of EV batteries globally.