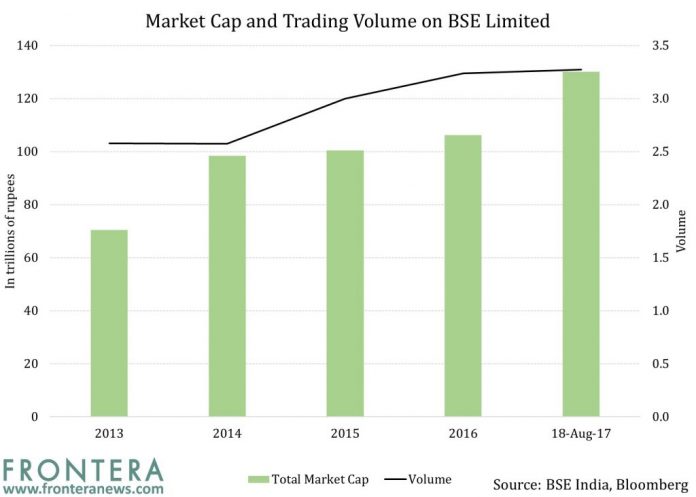 This is post 2 of 4 in the series “Which Are The Six Largest Emerging Market Stock Exchanges?”

India is one of the fastest growing major economies in the world, and along with China, is expected to power the global economy in the decades ahead.

Indian equities have been on a tear this year with the broad-based WisdomTree India Earnings Fund (EPI) having returned 28% in YTD 2017. Small-cap oriented funds have done even better with the Columbia India Small Cap ETF (SCIN) up by 38% in the same period.

Alike its economy, the stock market has not only done well, but is also one of the largest in emerging markets. It houses the third and fourth largest stock exchanges in the emerging markets universe behind China two bourses.

Let’s take a closer look at them.

Formerly known as the Bombay Stock Exchange, BSE Limited is the larger of the two major stock exchanges in India in terms of market capitalization according to the Annual Statistics Guide 2016 of the World Federation of Exchanges. The exchange is the oldest in Asia – it was established in 1875 and was known as “The Native Share & Stock Brokers’ Association”. It became the first listed stock exchange of India on February 3, 2017.

Interestingly, BSE claims to be the fastest stock exchange in the world with a median response time of 6 micro seconds. This announcement was made by its Managing Director and CEO Ashishkumar Chauhan in October 2015. It was able to achieve this feat by implementing Precision Time Protocol (PTP) which helped the BSE leverage the accuracy in all its time stamps, on its platform.

The exchange also boasts of the fastest trading platform in the country via its BOLT PLUS system which is based on Deutsche Börse’s T7 trading architecture and has a response time of 200 micro seconds.

Less than five months in the present fiscal (2017-18), in just 96 trading days, the turnover on the exchange stands at nearly Rs 4 trillion ($62 billion).

The table above lists some key metrics of the main equity index of the exchange – the S&P BSE SENSEX which is traded on the EUREX as well as on leading exchanges of BRICS (Brazil, Russia, China, South Africa) countries. The National Stock Exchange was the pioneer in introducing screen-based trading in 1994, derivatives trading (index futures) and internet trading in 2000. The table above shows some key metrics of the primary equity benchmark of the National Stock Exchange – Nifty 50.

This is post 2 of 4 in the series “Which Are The Six Largest Emerging Market Stock Exchanges?”