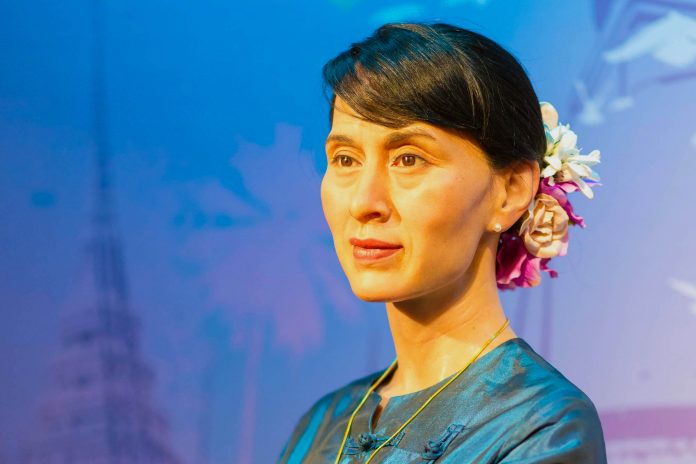 Myanmar’s historic elections in November 2015 saw the electoral triumph of Aung San Suu Kyi and her National League for Democracy (NLD) over the military that ruled the country for nearly six decades. Though the 71-year-old Suu Kyi – a globally-recognized ‘icon of democracy’ – was barred from assuming the presidency herself, she remains the driving force behind the new government’s reform efforts.

Suu Kyi’s administration has inherited a formidable task however. By prioritizing much-needed agricultural reform, improving infrastructure, and ending the country’s internal armed conflicts, she aims to reintegrate Myanmar with the global economy with slow, measured steps.

The daughter of Myanmar’s independence leader General Aung San, Aung San Suu Kyi has spent the majority of her life in the public eye. After receiving her education abroad, Suu Kyi returned to Myanmar in 1988 and organized rallies calling for reform against the country’s military government. She was placed under house arrest the following year, where she would remain in spite of her National League for Democracy (NLD) winning a majority in the 1990 elections. Suu Kyi was kept under house arrest intermittently until 2010.

Suu Kyi was barred from becoming president under a clause in the Myanmar constitution – one that was written specifically with her in mind – as her late husband and children are foreign citizens. Her childhood friend and confidant U Htin Kyaw instead assumed the presidency, though Suu Kyi is widely understood to be the country’s power broker. She instead assumed the portfolios of “State Counselor”, akin to a Prime Minister or head of government, as well as foreign minister.

Suu Kyi’s economic goals prior to the 2015 election were admittedly murky. The NLD released a five-pillar economic strategy, which includes revitalizing agriculture, monetary and fiscal stability, and modernizing infrastructure. Suu Kyi’s overarching priority as Myanmar’s de facto leader is continuing to attract foreign investment – hardly a drastic change from the previous government. The partially-reformed economy inherited by the NLD made impressive gains: Myanmar’s annual GDP growth has increased from 5.6% in 2011 to an average of over 8% since 2013, driven in large part by an influx of foreign direct investment and a curbing of international sanctions.

A chief priority for Suu Kyi has been pivoting the government’s attention to the agricultural sector. Myanmar is renowned for possessing some of the most favorable agricultural conditions in Southeast Asia and was the world’s leading rice exporter prior to the military seizing control in 1962. 70% of the country’s workforce is employed in agriculture; however, it was long neglected by Myanmar’s military rulers and remains in desperate need of reform. Per capita agricultural income is the lowest in Asia, according to the OECD. Rural farmers have access to limited credit through the state-run Myanmar Agricultural Development Bank, leading farmers to seek out loans from underground moneylenders. Increasing rural access to affordable credit would serve to increase rural incomes and break the cycle of debt in which many farmers find themselves trapped.

The NLD’s surprising electoral success in rural areas makes agriculture a key area of focus for Suu Kyi. However, land reform will be a difficult task, as the military and military-linked firms have been able to seize large tracts of farmland without compensating the previous owners. Suu Kyi is wary of provoking a confrontation with the military, which remains highly influential through control of key security ministries, a number of large companies, and holding a quarter of seats in parliament.

Myanmar’s poor infrastructure serves as another major roadblock to comprehensive economic reform. Only 30% of the population is connected to the national electrical grid, with more than half of the wiring estimated to be more than 70 years old. Electricity consumption doubled between 2007 and 2012, and with growth set to continue, the current capacity of Myanmar’s electricity generation is insufficient to meet this demand.

Meanwhile, only 40% of the country’s road network is paved, and the country’s rail system is nearly half a century old. There is a lack of coordinating structure for Myanmar’s transport sector: KPMG noted in a 2013 study that responsibilities are shared between six ministries, several city development committees, and state-owned enterprises, with no clear coordinating platform. Preliminary steps have been taken to address some of these issues, such as merging a number of overlapping ministries into single consolidated ministries.

A historic ceasefire signed in October 2015 by the major armed groups has paved the way for a peace deal. In her role as State Counselor, Suu Kyi has sought to build upon this agreement with a planned Union Peace Conference to be held at the end of August 2016. She has proven instrumental in negotiating with the military, whom many ethnic minority leaders accuse of dragging their feet with regards to the peace process. There remain huge obstacles to a final peace settlement, however if Suu Kyi can secure the foundation for a lasting peace in Myanmar, it would eliminate one of the key political risks impacting the country.

Tremendous challenges lie ahead for reforming Myanmar’s economy. While expectations for Aung San Suu Kyi and the NLD remain sky-high, she has only recently assumed office: undoing decades of economic and political stagnation will certainly take time. It remains to be seen how much patience and leeway will be afforded to Suu Kyi if concrete action is not seen in these three key areas in the year ahead. However, her immense and enduring popularity nationwide make Aung San Suu Kyi well-placed to carry out the difficult reforms Myanmar needs.

Daniel Bodirsky is a Global Security Operator at Scotiabank

This article was published by Global Risk Insights http://globalriskinsights.com/2016/07/aung-san-suu-kyi/