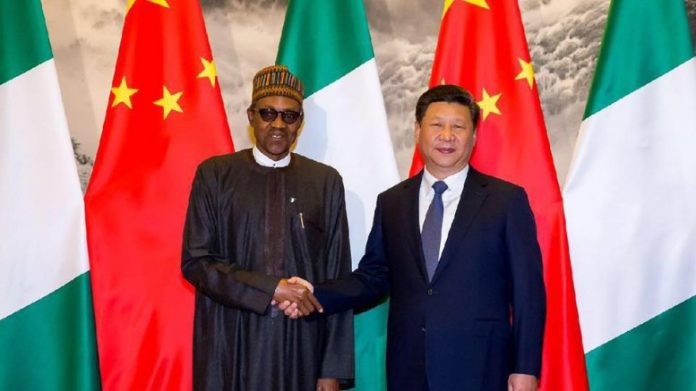 Charting China’s growing footprint around the world, our Eastern Approaches column follows the money from Beijing, starting with the $6 billion recently lavished on Nigeria.

A couple of years ago, the BBC commissioned a poll to assess the popularity of major nations.

The most positive view of China was to be found in Nigeria, where 85% of respondents had a favorable view of the country.

Such warm feelings are perhaps best attributable to China’s posture as a good friend – one offering a hand without patronising, at least by comparison to donors in the West.

Trade between the two countries has ballooned in recent decades, giving Nigerian consumers access to the multitude of cheap Chinese goods flooding the world. In return for market penetration, Beijing has won highly visible major infrastructure contracts – like the new Abuja-to-Kaduna high-speed rail line – with the promise of similar routes in the future.

Even so, President Muhamadu Buhari has taken the relationship to a new level. The biggest point of contrast is his openness. Unlike the shadowy meetings of the past, Buhari actually published his wish list before setting off for China.

And the list is long. Faced with a weakening economy and creeping popular concern over the inequality of the Chinese friendship, Buhari flew in to China promising to rebalance trade, get more support for infrastructure projects and receive assistance to plug the budget deficit.

Compared with such transparency, China’s embrace and $6 billion pledge is more mysterious. What exactly is motivating China? And what does it get from Nigeria?

Of course, Africa’s biggest economy – even in its current lackluster state – offers a major market for Chinese goods. And as a result of its relative economic heft, it also represents a powerful diplomatic ally on the continent.

As has become standard in Chinese-funded infrastructure, credit is tied to contracts for Chinese construction firms. The latest transport deals signed – a metro transit project for Lagos, the Lagos-to-Abuja expressway – promise a boost for Chinese employment.

Further than that, there’s an unspoken understanding that Nigeria will increasingly look to Beijing – whether it’s buying Chinese military supplies to fight the militant Boko Haram insurgency in the north, or using Chinese financial products, or backing Chinese diplomatic initiatives.

But there’s another broader macro imperative for China: making renminbi part and parcel of doing business in Africa.

The China-Nigeria deal entails a currency swap for trade arrangements with China. Additionally, the National Bank of Nigeria is committed to widen its basket of reserve currencies to include the renminbi. And rather than taking the usual route of tapping foreign bondholders for dollars, Nigeria is looking at raising much-needed funds through Panda bonds (the popular term for renminbi-denominated bonds issued by non-Chinese borrowers).

In isolation, these moves may be relatively marginal. Taken together, they advance China’s grand strategy. They are important incremental steps in China’s long-term quest for the renminbi to become an international currency.

While Nigeria badly needs investment in domestic manufacturing to reduce its imports and develop its own industrial base to emulate some of China’s success, it’s hampered by poor infrastructure – particularly the regular crippling power cuts.

Development is underway on a limited scale in places like the Chinese backed Ogun-Guandong Special economic zone, just outside Lagos. Chinese manufacturers have set up shop in the zone to serve the local and domestic market.

But it’s hard to see Chinese firms investing in Nigeria when places such as Vietnam, Indonesia and even Ethiopia are more investor friendly.

Nigeria’s hope is that improvements planned for power supplies by the likes of Aliko Dangote, Africa’s wealthiest businessman, will spur Chinese manufacturing and local imitators to develop a manufacturing base.

Meantime, Nigeria is sensitive to Chinese manufacturing competition. The last decade has seen an open door to Chinese imports. The policy has decimated a once healthy local textile industry, leaving a legion of disgruntled ex-workers and entrepreneurs, and a nation wearing Nigerian-style clothing made in China.

But Buhari’s administration is in a vulnerable spot. Nigeria faces a yawning budget deficit thanks to the collapse in oil. Much of the revenue from years of high prices has been siphoned off by corruption.

While International Monetary Fund President Christine Lagarde has invited Nigeria to seek its assistance, her appeal has been largely ignored. That’s probably because in the same breath she’s pouring thinly veiled criticism on Buhari’s misguided refusal to allow the naira to depreciate through starving importers and investors of dollars.

Chinese credit comes with fewer pesky questions and conditions. In contrast to the Nigerian public’s warmth to China, the IMF is overwhelmingly despised.

Merlin Linehan is the founder of Rising Powers, a company which charts the economic strategy of China and other emerging economies. He has worked in development finance within Eastern Europe and Asia, and spends much of his time investigating the risks and opportunities that are created from the ongoing expansion of Chinese businesses that invest overseas in emerging markets.