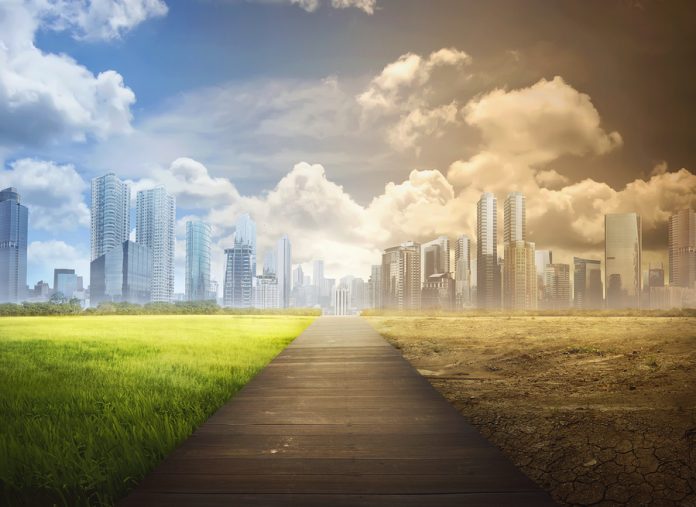 Anyone walking around outside in Beijing or indeed most major Chinese cities would probably laugh at the suggestion that China could be providing leadership in the global fight against greenhouse gas emission and climate change, but some are now claiming that the Chinese government is doing just that.

Although China has already transformed the rest of the world through its commercial clout, in the long term the biggest impact it will make on the globe is via its commitment to preventing man made climate change. While many are already lauding China’s new status as a climate hawk pointing to a government ready to put words into policy and practice, others are more sceptical highlighting its huge carbon emissions and suggesting Beijing just looks good in comparison to the Trump administration and its retreat from the 2015 Paris Agreement.

China’s ability to move to a low carbon economy will be a key part of the fight against man made climate change, fail to reduce carbon emissions rapidly and it will help ensure the world shoots beyond the maximum 2 centigrade temperature increase recommended by scientists and thus endure catastrophic climate breakdown, but succeed in rapidly and dramatically reducing the release of greenhouse gases and the worst effects of climate disaster could yet be averted.

The bad news is of course that China’s industrialisation has meant it has already claimed the mantle of world’s largest green house emitter, not a strong position with which to claim global environmental leadership upon. Of course much of this is down to the fact that it has the world’s largest population and when emissions are measured per capita the picture is less damning, that said China is an energy intensive economy where there is widespread use of outdated factory equipment and inefficient vehicles.

China is also a heavy user of coal, the worst offender in terms of emissions in the fossil fuel hall of infamy. Heavy coal use has created a series of cities which suffer from toxic smogs and polluted waterways, the result is a public health disaster which is killing 1.6 million Chinese people a year through air pollution.

But change is in air, the Chinese government’s latest five year economic plan has policies now being enacted which promise to reverse these trends. Local governments and cities are also pushing change through designing more sustainable cities and investing in public transport. What perhaps is most striking is the speed in which China has come to dominate clean energy industries, five of the top 10 wind turbine manufacturers are Chinese and five out of 6 solar panel producers are Chinese. Crucial of course to these firm’s success was government backing in the form of subsidies, so much so that that it has led other governments to accuse them of unfair trade practices.

Whatever others might think this has allowed China to rapidly build up domestic capacity in renewables and begin exporting overseas. Now the Chinese National Energy Authority has announced it will spend US$ 360 billion on renewables through to 2020. This could turn the tide against fossil fuels and demonstrate how a major developing energy market can be successfully transformed to a lower carbon density profile.

Chinese investment in renewables overseas is also beginning to make an impact – with around US$ 32 billion invested in 2016 a figure the government has promised will jump further, solar and wind projects are now appearing along the Belt and Road initiative as well developed countries and South America. That said China also continues to invest in fossil fuel plants like coal fired power stations in Pakistan.

Beijing is launching the world’s biggest emissions trading scheme this November, this will follow on from seven pilot schemes and eventually it will create a trading system across the whole country involving around 10,000 firms in key sectors like steel, power, petrochemicals and aviation. By issuing permits on how much carbon can emitted annually and by putting a price on these emissions, and then allowing companies to trade them the scheme will create strong incentives for firms to become more carbon efficient. If the scheme is enacted in the right way companies will invest in energy saving buildings and equipment to save money.

China also has a fast emerging green bonds market, the country issued US$ 36 billion (40% of the global market) in 2016 from virtually nothing in 2015, the funds issued through the bonds should be used for environmentally friendly investments, but there are doubts that all the funds are being used in the right way as reporting standards are hazy and transparency is not the Chinese financial markets strong point.

If these initiatives and policies continue China could truly lead the way in preventing climate breakdown, but there is also a danger the reform process may run out of steam and the drive to become a lower carbon economy could become unstuck. Rapid change is possible – China has shown that in the last 30 years as it moved from a rural backwater to global industrial giant, now it must repeat the challenge and become a low carbon economy.