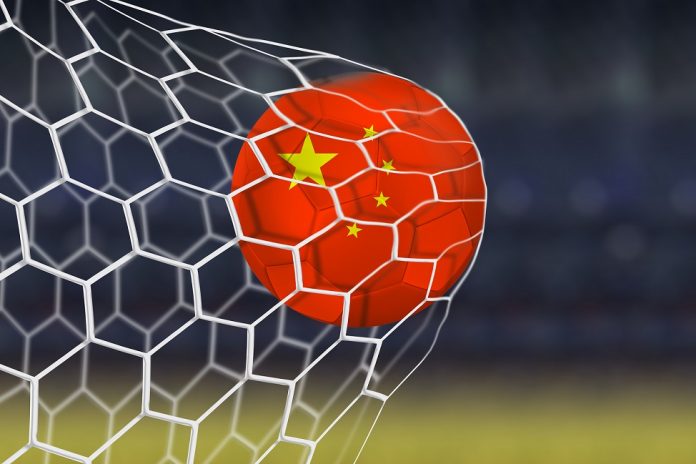 Manchester United’s Executive Vice Chairman Edward Woodward recently noted with a trace of arrogance borne from the club’s decades of stellar financial and footballing success that China “might be another useful market if we’re looking to sell any players.” Very soon though, his club might be facing direct competition from formerly obscure Chinese football clubs for the cream of the European football leagues as they start to snap up not just aging pros looking for one last big pay day in a less competitive league, but rather players at their peak. Take for example Alex Teixeira, a 26 year-old Brazilian star who was snatched from under the noses of Liverpool to leave Shakhtar Donetsk for £38 million to go and play for Jiangsu Suning.

While there has been a recent influx of talent into Chinese football, at the same time a sudden but massive flood of Chinese money has washed up into European football. Suning Group has taken a controlling share of Italian giants Inter Milan, Wanda Group took a minority stake in Atletico Madrid and Chinese car maker Rastar bought just over 50 percent of Barcelona based club Espanyol. In the United Kingdom, The Midlands region has been the unexpected recipient of Chinese investment. Recent purchases of sleeping giant Aston Villa, plus its neighbour and rival Birmingham along with two of the region’s other clubs, Wolves and West Brom, have all been lead by investors from China and Hong Kong.

There have even been rumours that Chinese buyers have been quietly probing Liverpool’s US owners for a sale, unsurprisingly so, as landing Liverpool would be a huge coup. Despite a lack of recent trophy ware their international support base and mystique remains firmly intact. In total, 21 clubs in Europe now have some level of Chinese ownership, a figure which is expected to rise in the coming years.

There is a fear that some of these sales were conducted by less internationally experienced operators dazzled by the success of the top European leagues. Alexander Jarvis, Chairman of Blackbridge Cross Borders Group, which has brokered a number of Chinese football deals for European clubs explained that, “Very few have a tangible 100 day action plan once the deal is signed – we help with this”.

Some firms seem keen to move money out of China in order to make a quick buck and move on. Others see the ever-expanding European football pie and eye a long-term cash cow in the huge potential for advertising sales and spin off merchandising. These owners also perhaps fail to realise that not all clubs can gain international fan bases overnight and earn huge revenues, particularly if lots of other entrepreneurs are pursuing the same strategy.

It is inevitable that some of these takeovers will end in tears as football is a cruel zero sum game which needs relegation and mid-table obscurity as much as trophy winning glory. Not everyone can come out on top and many of these new owners will end up disappointed and leave fans angry, despite spending a fortune on players and managers that fail to live up to expectations.

Some deals such as Wanda Group’s tie up with Atletico Madrid are part of a concerted effort to build a global entertainment brand, others have less obvious commercial sense like Tony Xia’s takeover of Aston Villa (he runs a loss making food additive firm). All these deals do offer a chance for the owners to develop an international profile with a highly visible acquisition that also happens to promote the government’s vision of interntional expansion.

Chinese football tie-ups, whether they are buying Brazilian wiz-kids or European glamour clubs all have the potential to promote China’s soft power, which is why the government has quietly encouraged this push into overseas football. It is therefore believed that those seen to support this can expect to be treated more favourably.

As Chinese firms become enmeshed in the global football industry, they will also become part of the fabric of the sport. This will help to slowly lessen suspicion amongst both the public and policy makers for what is to many people a faraway unfamiliar country.  Football can be a great cross-cultural connector as its shared knowledge, loves and rivalries can unite people from an array of different backgrounds. If China can be seen as an influential footballing nation it will do more to promote the country’s image than any PR firm or propaganda drive could ever achieve.

This drive for soft power is also a method of gaining influence over foreign governments and businesses. Tie-ups like China Media Capital’s (CMC) purchase of a 13% stake in Manchester City are a case in point. CMC took a sudden interest in football when prompted by the Chinese government and saw a deal with the club’s owners quickly wrapped up during President Xi’s recent trip to the UK. CMC suddenly gained a close relationship with Sheikh Mansour, the owner of a majority stake in Manchester City and also a powerful member of Abu Dhabi’s ruling elite. Abu Dhabi is well known as both a key investment hub in the Gulf, as well as a major oil exporter, a region where China is keen on further extending its influence and building yet another global investment portfolio.