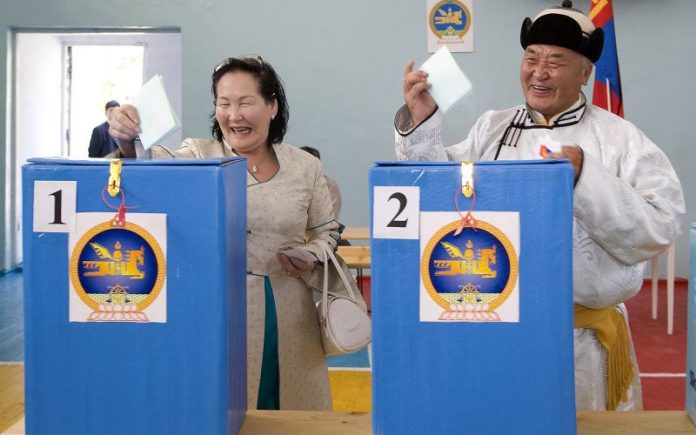 Mongolia enters 2017 on the heels of the global commodity slump that torpedoed the country’s economy and provides the backdrop for the upcoming presidential election in June. Mongolia’s economic growth forecast is -0.2% for 2017 – a stark contrast to the runaway, double-digit growth experienced only a few years ago. The country’s economic situation adds an important dimension to the June 26th presidential election, as mounting frustration and disenchantment could provide fertile ground for a political upset.

In order to meet IMF bailout terms, Mongolia passed a supplementary budget, promised to keep the central bank from undertaking any quasi-financial activities, and must carry out an asset-quality review of its banks by November. With a budget deficit of 17% of GDP in 2016 and 11% in 2017, Mongolia hopes that IMF aid and severe belt-tightening will see the budget deficit drop to 4% by 2020. With commodity prices picking up – Mongolia exported year-on-year 446% more coal in Q1 2017 – the IMF predicts a robust 8% growth rate by 2019. So far the signs appear promising, with Mongolian exports up 36% in the first quarter of 2017 compared to last year. Investor confidence also appears to be returning, with March’s seven year, $600 million Khuraldai bond six times oversubscribed.

Whatever else may occur, the fact remains that Mongolia remains fundamentally dependent on commodity exports, especially to China. Consequently, maintaining investor confidence and stability is vital. In the meantime, the upcoming presidential election highlights widespread public anger, and any sabre rattling (and potential surprise win) by populist candidates could seriously jeopardize Mongolia’s goals for the coming years.

Longstanding grievances about inequality and a lack of trickle down benefits from the country’s mining boom are now accented by the pain from the conditions of the IMF bailout. While the river of mining money largely passed ordinary Mongolians by, they are now the ones most impacted by the government’s austerity measures. These measures include: increased taxes on tobacco, passenger vehicles, petrol and alcohol as well pay cuts for civil servants. Further changes also include: higher employer and employee social insurance payments, cuts in social service offerings, a raise in the retirement age, and cuts in allowances for children and pensioners. 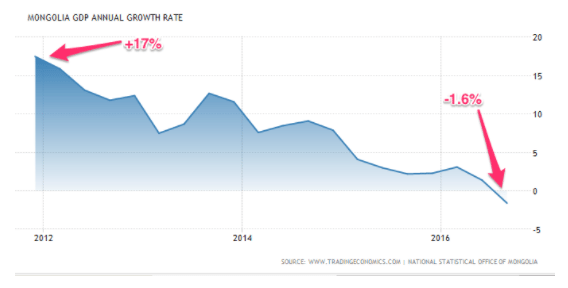 Wealthy Mongolians are also unhappy, as a reformed progressive tax system raises the top tax bracket to 25% and introduces tax on savings interest. These measures proved so unpopular that the Mongolian Chamber of Commerce threatened to boycott tax payments in protest.

Another source of instability has been the efforts of Mongolian politicians to strengthen the economy on their own terms. Such efforts saw Mongolian People’s Party (MPP) member Davaasuren Tserenpil introduce measures in the 2017 budget requiring foreign companies to bank with local institutions, as well use local commercial bank accounts for sales transactions. In response, Rio Tinto – a major investor and mining operator in Mongolia – complained to the IMF, which in turn delayed bailout payments in early May, expressing concern over the proposals.

Rio Tinto argued that the Mongolian government was increasing taxes on mining firms under the guise of IMF bailout requirements, and that Rio Tinto already uses local banks for employee payments. Moreover, Rio Tinto refuses to use banks with less than an AA rating: the highest rated Mongolian bank – Khan Bank – is rated B- by Fitch and Caa1 by Moody’s. While MPP parliamentarians maintained that the legislation did not pertain to Rio Tinto’s massive Oyu Tolgoi mine (upon completion in 2010, the mine accounted for over 30% of Mongolia’s GDP), legislators have nevertheless bowed to external pressure and amended the budget to ensure the bailout funding is received.

This incident highlights the power dynamics at play in the country, with many complaining of the disproportionate power wielded by mining companies, such as Rio Tinto. These sentiments feed into the national discourse in the run-up to the June elections. This is reflected in the controversy surrounding a government bill, the so-called ‘Law of Infringement’ which would allow police to fine individuals up to $41,000 for spreading libelous or defamatory (including via social media) information without having to go to court: this fine is increased to $410,000 for media outlets.

The ruling MPP government has accused the media of spreading false reports and creating division in the months leading up to the election. In response, twelve national broadcasters went dark on April 25th and seven newspapers suspended their websites, with print media outlets also running black front pages in protest. Mongol TV News director Lhagva Erdene argued that the bill represents “[…] the death of opinions and critical thought before the election.” 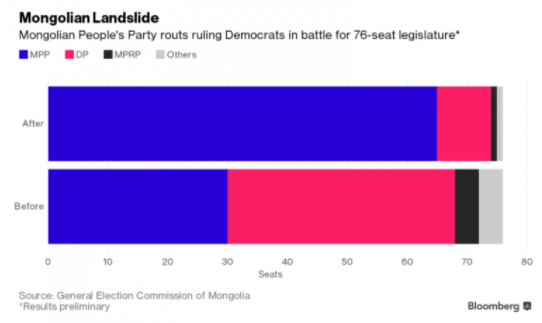 On the subject of opinions, the 2017 election will see a new policy on opinion polling, with polling now permitted up to 21 days before the election, an increase on the previous limit of 65 days. This will add a new dimension to this election, one that could see a greater role played by reports on public opinion shifts, a situation that benefits populist candidates who capitalize on such swings and their momentum.

Checking out the playing field

The MPP swept legislative elections in 2016, ousting the Democratic Party and securing 65 of 75 seats. The MPP’s victory was in large part due to public discontent over the state of the economy, yet it remains to be seen whether the MPP can continue its winning streak, or if its heavy handed methods combined with lingering economic woes will undermine its chances of securing the presidency.

With President Elbegdorj’s term up, the Democratic Party has selected Khaltmaa Battulga, a self-made millionaire and judo star. Battulga served as an MP in the previous Democratic government from 2011-2016, occupying the posts of transport and agriculture minister. Battulga is also an outspoken critic of Mongolia’s dependence on China, a dependence underwritten by mining exports. Consequently, Battulga’s stance on China could threaten investor confidence if this sparks a drop in relations or worse. While Battulga is unlikely to antagonize China to the point of sinking the Mongolian economy, if elected he could try to take the country in a new direction, either via economic diversification or seeking out other trading partners. The latter is a tricky prospect given Mongolia’s isolated and landlocked position. 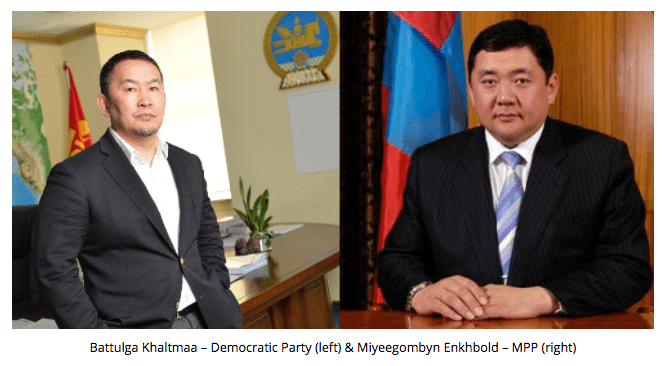 As for China, President Xi Jinping extended his country’s offers for continuing assistance and cooperation, as well as noting that Mongolia is welcome to actively participate in China’s One Belt, One Road (OBOR) plans, during the OBOR summit from May 14th – 15th.

The MPP has chosen parliamentary speaker Miyeegombyn Enkhbold as its candidate. Expect more of the status quo from an Enkhbold administration, as the MPP seeks to further consolidate its grip on power in 2017. To this end, the MPP government has tried to reassure mining interests, with an announcement in early March promising to soon increase the percentage of the country open to mining exploration from the current 9.6% to 20.9%.

The MPP and Democratic Party have been the two main political forces in post-independence Mongolia; however, the ongoing economic downturn, recycled politicians and corruption has tainted both parties in the eyes of the Mongolian electorate. Opinion polling done before the 2016 legislative election showed that 60% of respondents had little to no confidence in political parties, and that some 60% of Mongolians described themselves as independents. In this context the MPP victory appears as a protest vote against the current government, with the MPP benefiting from being the only viable alternative.

The 2017 election has already seen some controversial candidate choices, with the Mongolian People’s Revolutionary Party (MPRP) initially choosing former president Enkhbayar Nambaryn. The MPRP, a MPP splinter group founded by Enkhbayar in 2010 has a rather fluid identity. Having parted ways with the MPP over concerns of the latter’s drift away from its traditional socialist roots, the MPRP together with the Mongolian National Democratic Party (MNDP) formed the Justice Coalition headed by Enkhbayar to contest the 2012 parliamentary elections. It eventually entered government as a junior coalition partner of the Democratic Party, having won 11 seats.

Enkhbayar was prime minister from 2000 to 2004 and president from 2005 to 2009, overseeing the landmark Oyu Tolgoi deal with Rio Tinto. Enkhbayar remains popular despite being jailed in 2012 for graft. Enkhbayar and his supporters maintain that the charges were politically motivated; a claim seemingly supported by his 2013 pardon by President Elbegdorj. Nevertheless, Enkhbayar was barred from entering the 2017 race because he remains banned from holding office under his original sentence until October 8th.

Bereft of their founder, the MPRP has been adrift, eventually making an interesting second choice in the form of Sainkhuu Ganbaatar. Ganbaatar, who entered the presidential race on May 16th, is described as a resource nationalist, a populist who has agitated against foreign control of Mongolia’s resources for years. Ironically, the party of the architect of the Oyu Tolgoi deal has selected the mine’s most vocal opponent to represent it. 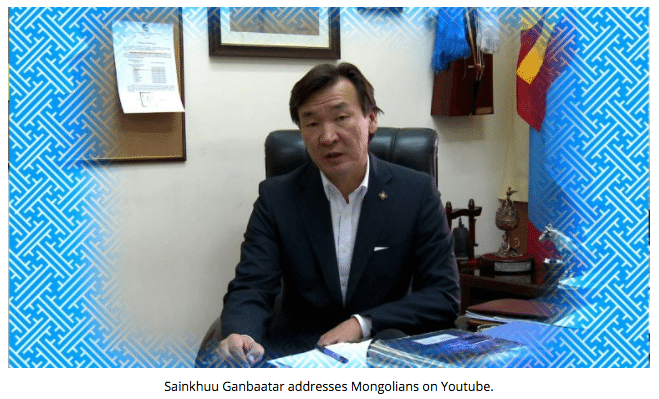 Ganbaatar led calls for a redo of the Oyu Tolgoi deal with Rio Tinto in 2013, calls that helped antagonize relations with the company, eventually leading to the suspension of the $5.3 billion expansion. A conflict over a $340 million tax bill with the Democratic government, and the efforts of resource nationalists, like Ganbaatar pushing for a better deal eventually saw Rio Tinto cut 1,800 Mongolian jobs. The company remained at odds with the government over the issue for years.

The dispute with Rio Tinto severely damaged investor confidence and in part exasperated the impact from the global commodity downturn which was accelerating at the same time. It was only last year that Mongolia and Rio Tinto finally agreed to proceed with the Oyu Tolgoi expansion. Having committed economic and political capital to the expansion, Rio Tinto is now vulnerable to a surprise political upset by Ganbaatar.

Ganbaatar now finds himself running for president, aiming to capitalize on the frustration surrounding Mongolia’s economic situation – a situation which Ganbaatar helped create. The new polling regulations, combined with existing disenchantment with established parties and the high percentage of self-reported independents could all potentially benefit Ganbaatar. A lack of strong party loyalties among many voters, plus an emphasis on personality driven politicking is an ideal environment for a populist. Furthermore, Ganbaatar is also very popular, having captured the top spot (for both 2015 and 2016) in a popularity survey ranking senior Mongolian politicians by polling organization, Sant Maral.

While Ganbaatar’s popularity has slipped somewhat (he lost his seat in parliament in 2016) he nevertheless remains a force to be watched. Indeed, the extent to which his loss in 2016 was due to the general route faced by all non-MPP candidates rather than his personal appeal remains uncertain. Nevertheless, his vocal efforts make him a well-known persona, and his popularity remains robust. Whether he can capitalize on this remains to be seen. Ganbaatar’s position is summed up by Sant Maral head Luvsandendev Sumati: “He’s popular, but people consider that he’s not fit for the office of the president.”

Where have we heard that before?