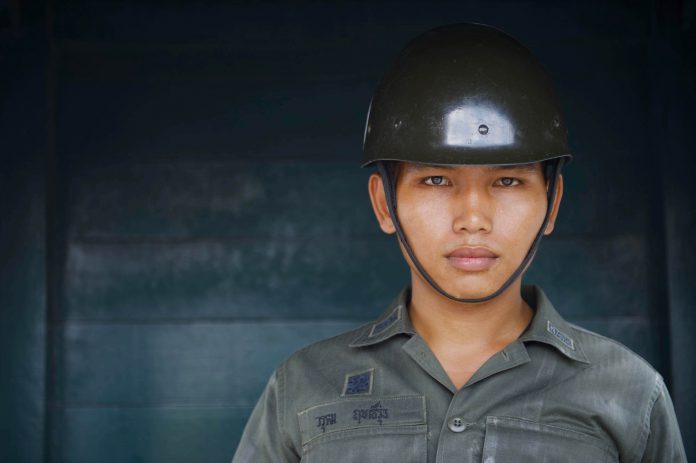 The Thai army is once again mired in controversy after a series of young cadets were found dead while undergoing military training. To worsen the situation, in the latest case, the niece of a deceased cadet was charged for damaging the reputation of the army when she tried to reveal the brutalities that have been going on inside the barracks.

This week, Naritsarawan Kaewnopparat, currently an officer working for children’s social welfare, was arrested for defaming the army through her Facebook writings. She accused the military of protecting “certain peoples” in the army who were responsible for the violent murder of her uncle, Wichian Puaksom, who died in the army camp in June 2011. Though she was subsequently released on bail, the case against her remains and she has exposed what is a wider problem in Thailand.

Wichian volunteered to serve in the army and was stationed in Narathiwat Province in Thailand’s Deep South. He was caught running away from the training and, according to Naritsarawan, was tortured to death. Found guilty of abandoning his duty, he was slapped in the face several times and dragged on concrete floors naked. His body and face were crunched by several higher ranked soldiers, who also also stomped on his neck, stabbed his upper legs with sharp bamboo poles, and kicked him in the testicles.

Though this would clearly be regarded by any outside observer as inhumane, this is actually not unheard of in Thai military culture. Within the military, there exists a kind of punishment, known in Thai as “som,” which involves physical brutal attacks against victims.

The injury caused to his body was so severe that he was sent to an emergency room in a Narathiwat hospital, but even the doctor could not save him. All this time, his family was kept in the dark about what went on. When the news of his death broke out, the military attempted to silence the family by offering compensation of 7 million baht ($200,000), but the Puaksom family rather wanted justice for their son.

Naritsarawan, then just a university student, embarked on a journey of discovering the truth about her uncle’s death. She wrote numerous complaint letters and petitioned to the highest authorities in the army, including General Prayut Chan-o-cha, the current prime minister who was then the army chief, to investigate the case and bring the culprits to justice. But all her efforts seemed to fall on deaf ears.

Apart from the fact that her repeated calls for justice for Wichian were denied, Naritsarawan and her family have also continued to be traumatized by intimidation and threats. Her family was warned by the authorities not to dig up the case lest their own lives be taken. Once, someone fired a gunshot into her house, though fortunately nobody was injured.

Naritsarawan’s grievances became the subject of public attention again following the recent death of another military officer, Kittikorn Suthiraphan. Kittikorn was also killed in an army camp in February this year. The tragedy reminded Thais that the culture of “som” within the military has not been abolished, contrary to what the army had said to Naritsarawan about her uncle being the last case of its kind. Feeling betrayed, she began to write critically on Facebook about the dark secrets inside the military, including its culture of impunity as well as its aversion to being transparent to the rest of Thai society.

Within this context, there have been numerous cases involving wrongdoings or irregularities on the part of the army or groups or individuals within it. Yet these incidents have been either buried or fiercely defended by the coup makers. For example, Rajapakdi Park was sullied by a corruption scandal involving the army, even though it denies its involvement up till today.

Top military elites have also exploited their position to promote their relatives, friends, and allies. Prayut’s brother, General Preecha, was promoted to the position of permanent secretary of the Defense Ministry and a member of the National Legislative Council. Preecha also appointed his son to serve in the army too. Deputy Prime Minister General Prawit Wongsuwan’s brother, Patikom, was handpicked to head the Department of Corrections. The media in Thailand is not allowed to discuss the promotions of these powerful figures.

Naritsarawan’s tireless pursuit of justice should not be seen as just an attempt to seek redress, but also an opportunity to expose the dark secrets of Thailand’s military which is at the root of many of the country’s problems. Her case is proof that key institutions have been militarized, including the judiciary, which has been closely working with the army to defend their mutual political interests.

The deaths of the two cadets may suggest a series of troubling incidents within the military. But they also symbolize a larger problem in Thailand: a country becoming a lawless state ruled by ruthless military despots.