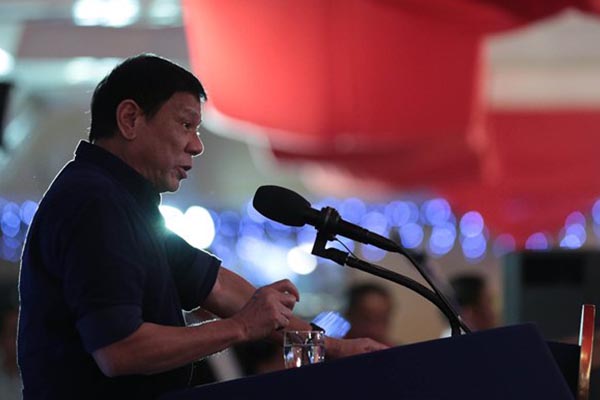 On Saturday 26 November, former president Fidel Ramos attended a speech by President Rodrigo Duterte. Acknowledging the presence of Ramos in the audience, Duterte proclaimed that the former president was his “number one critic and number one supporter”.

The 88 year-old Ramos immediately came to a stand, raised his hands in a fist, and jumped in the air with a thumbs-up sign. The speech was delivered to graduates of the San Beda College of Law.

Just last week, Ramos had spoken out publicly at a press conference against Duterte’s decision to grant the late dictator Ferdinand Marcos a hero’s burial at the Libingan ng mga Bayani on 18 November, calling it a “step backwards” for the administration.

During the same press conference on 21 November, he added that the Marcos wealth should be used for humanitarian purposes and payment for claims of martial law victims. According to an estimate by the Philippine Supreme Court, the Marcos family had accumulated up to $10bn while in office.

This came as little surprise to many. As the Armed Forces vice chief of staff, Ramos had turned his back on then President Ferdinand Marcos during the 1986 People Power revolution. This was seen as a major turning point in the eventual outcome as Ferdinand and Imelda Marcos got on a plane shortly thereafter, flying into exile in the United States.

In 2004, Transparency International, the anti-corruption watchdog, named Marcos the second most corrupt leader of all time, with his counterpart in Indonesia, Suharto, claiming the top position.

The iShares MSCI Philippines ETF (NYSEArca: EPHE), the lone ETF dedicated to the Philippines, is down 16.2% in the past three months.

However, the Philippines national GDP outperformed expectations at 7.1% year-on-year in the three months following the Duterte’s inauguration on June 30, and is on track for a growth of 6-7% for 2016.

HSBC Global Research recently noted that, “The United States is the largest investor in the Philippines, but in 2017, China is likely to jump into the first place by a wide margin.”

Duterte recently announced plans to award at least US$1 billion of contracts to build an airport and a railway to transform Clark Air Base, a former US military site, into a commercial hub as part of the current administrations plans to distribute wealth beyond congested Manila.