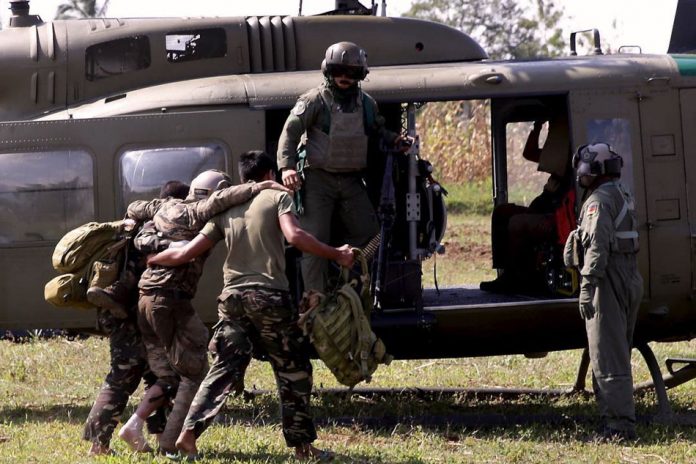 The Armed Forces of the Philippines (AFP) are entering their fifth day of an offensive attack in Butig town, Lanao del Sur, headed by the 103rd Infantry Brigade.

The conflict began when 200-300 Maute militants took over Butig town on Saturday morning after disarming its policemen. The siege could reportedly force up to 16,000 residents to flee.

In a briefing on Tuesday 29 November at 16:00, military spokesman Colonel Edgard Arevalo said that the military effort had resulted in the death of up to 49 members of the Maute militant group, with 20 wounded soldiers.

Arevalo stated that Maute snipers were holding back any further advances by the military to recapture the city.

Philippine troops are using 105mm howitzer cannons to attack enemy positions from their military base just outside of Butig town.

The town of Butig is located approximately 800km from Manila and just 50km from Marawi City where Duterte is scheduled to visit today.

President Rodrigo Duterte’s security team was the alleged target of a bomb that exploded in Marawi City in Mindanao on Tuesday morning 29 November at 10:45am.

Seven members of the team were reported injured, with two more in critical condition.

Col. Roseller Murillo, commander of the Army’s 103rd Infantry Brigade, responded to rumors circulating that Tuesday’s ambush was fake saying that such claims were part of propaganda by sympathizers of the Maute terrorist group. The government, he said, “would not injure fellow troops to create a scenario.”

Duterte announced in a speech later in the day on Tuesday at Fort Magsaysay in Nueva Ecija that he will proceed with his plan to visit Marawi on Wednesday saying, “I’m going there. I am just simply going there.

The advice was to postpone, I said ‘no’. He added, “If I will not survive, she [Vice President Leni Robredo] is there.”

Maute group, along with the Abu Sayyaf, has repeatedly pledged allegiance to the ISIS.

Defense Secretary Delfin Lorenzana says the government has yet to establish whether Maute group is receiving logistical support from ISIS.