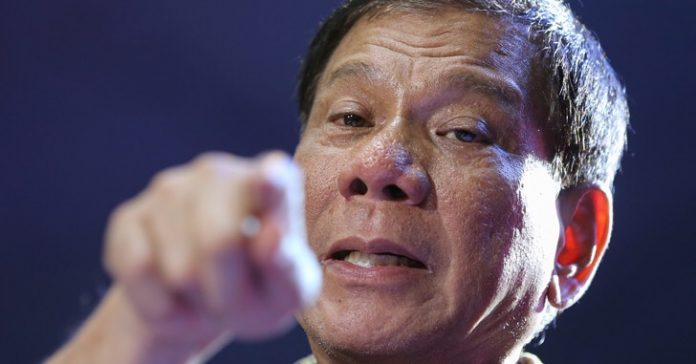 He’s beyond out of control.

Obama promptly cancelled his first meeting with Duterte, talking only briefly during this week’s ASEAN meeting. America’s counter-snub throws in the air relations with the Philippines’ main ally in challenging Beijing’s advances into areas that Manila holds legal claim to in the South China Sea.

Such name-calling might be shocking but the damage wrought by Rodrigo Duterte in little over two months of his presidency runs far deeper. Obama promptly cancelled his first meeting with Duterte, throwing in the air relations with the nation’s main ally in challenging Beijing’s advances in the South China Sea in those areas legally claimed by the Philippines.

At the same time, rule of law within the Philippines itself has been dispensed with. In his inaugural speech as president, Duterte told an audience: “If you know of any addicts, go ahead and kill them yourself.” Reportedly, the result has been at least 2,400 deaths of alleged drug users and dealers. After UN condemnation, Duterte refused to meet Secretary General Ban-ki Moon and his “useless” organization.

While Duterte has expressed regret for his recent attack against Obama and the Pope last month, there’s little call for remorse from investors. While the Philippines Stock Exchange Index has erased its rally since Duterte took office, foreign fund managers added a net $276 billion to the equity market during the period, sending stocks to their most expensive valuations in more than three years last month. The nation’s currency, the peso, had the strongest performance in Asia.

Son of a Duck?

“Emerging markets as a whole have been rallying in the last few days and the Philippines seem to have missed that, but I don’t really think that will last,” Alan Cameron, an economist at Exotix Partners, said following Duterte’s outburst against Obama. “I don’t think his comments really matter for investors that much. Anyone who followed the presidential election campaign in the Philippines knows very well about his antics.”

Duterte might be among the more egregious of world leaders but, points out Cameron, his election comes in the context of a “trend globally of people who are pretty loud-mouthed.”

“Politics has become increasingly dominated by personalities as opposed to policies. What investors care about more is policies.”
Given this wasn’t his first foul-mouthed rant, Duterte’s latest utterance shouldn’t come as too big of a shock for investors. More surprising is that Obama chose to cancel the meeting, said Cameron.

Yet even this apparent breakdown in US diplomacy doesn’t really change anything given that other phrase increasingly used to describe Obama: the lame duck.

“Everyone’s focused on what the next policy will be, and I think you have two very different options being proposed: Hillary Clinton, who is in favor of free trade, even though she’s not saying it in a very loud way right now, and Donald Trump, who’s basically threatening to walk back a lot of the achievements of free trade of the last 20 or 25 years,” said Cameron. “That’s the bigger focus, not what Obama will do in the next two months.”

For more analysis from Exotix Partners’ Alan Cameron on recession in Nigeria, the Kenyan presidency’s encroachment on central bank policy and the effect of Fed forecasts and China’s debt burden on frontier markets, listen to the Emerging Opportunities podcast here.