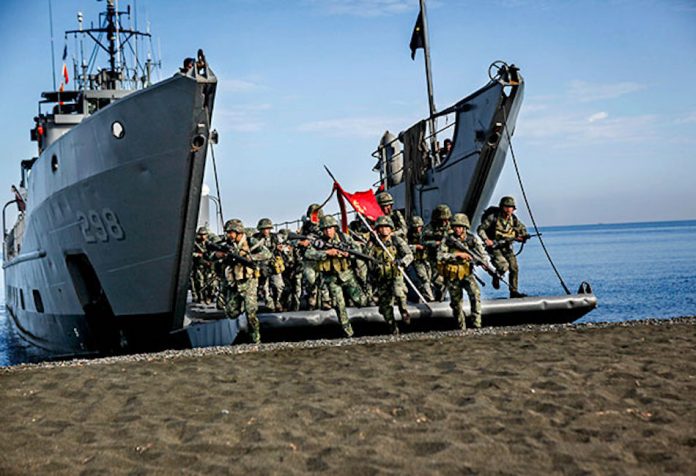 “Once the terrorists of the Middle East are deprived of the land area, the real estate area where they can sleep … they will wander to other places and they will come here and we have to prepare for that,” President Rodrigo Duterte said in a speech today.

The comments come after The Philippines suffered two violent kidnappings on Monday and Friday of last week.

On 7 November, Abu Sayyaf sub-leader Muamar Askali alias Abu Rami, the self-styled spokesman of the terror group, claimed they had captured a German national after the Philippine military found a murdered woman on an abandoned yacht believed to be his wife.

Four days later, as many as six Vietnamese sailors were abducted and one shot on a freighter after gunman boarded a vessel in the waters off Sibago island in Basilan, an Abu Sayyaf stronghold.

The Chief of Staff of the Armed Forces of the Philippines (AFP), Gen. Ricardo Visaya said last week he is optimistic that the military will completely decimate Abu Sayyaf by his self-imposed deadline of 8 December, when he is set to retire.

The Philippine military claims it killed 70 Abu Sayyaf militants and captured 32 others from July – October in an offensive targeted specifically at the group.

According to a joint military and police threat assessment report circulated in late October, Abu Sayyaf pocketed at least $7.3 million from ransom kidnappings in the first six months of 2016.

Duterte made a two-day visit to Malaysia last week to meet with his counterpart Prime Minister Najib Razak and discuss increasing regional security via joint military cooperation. The trip ended with a state dinner on 10 November where Duterte and Najib sang a duet together: 1970s chart topper Sha-La-La-La-La by Danish rock band The Walkers.

The hijacking of the foreign cargo vessel with the Vietnamese sailors occurred just hours later at 5:00am on Friday.