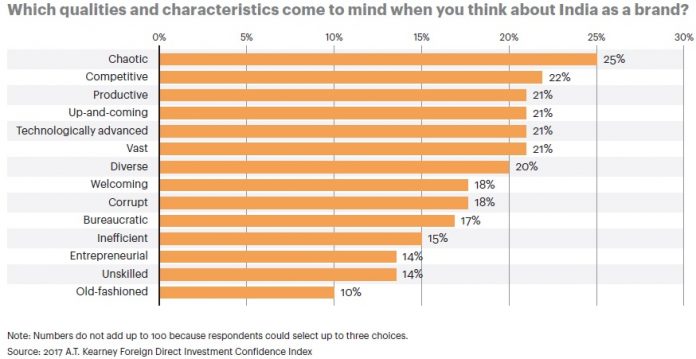 Overseas investors have a renewed interest in investing in India, despite many describing it as ‘chaotic.’ These are the findings of consulting firm AT Kearney’s 2017 Foreign Direct Investment (FDI) Confidence Index report.

The research outlines top 25 countries in terms of potential FDI flows after conducting a survey of investors. The report had some interesting insights on investor inclination towards emerging markets this year and increasing interest towards frontier markets as well. 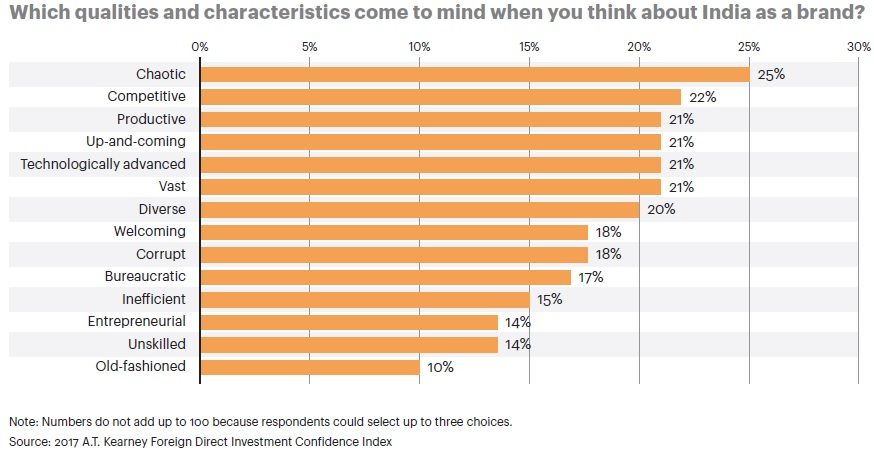 Investing in a ‘chaotic’ nation

The mention of India can elicit many different sentiments, but investors see it as ‘chaotic.’ This assessment, along with other views, can be seen from the graph above.

India was in focus in the 2017 report because of the steady climb in rankings in the aforementioned Index. The firm stated that “The brand of India is overall a very positive one. Investors see it as a vast and diverse up-and-coming market.”

Initiatives by the government

Apart from the fact that India is the fastest growing major economy in the world, the government’s initiatives have been crucial in making India interesting for FDI flows.

The Indian government’s ‘Make in India’ initiative was launched in 2014 with the objective of providing international businesses an alternative to manufacturing hubs, mainly located in China. Further, in order to support this initiative, the government has undertaken several steps to make doing business in India easier.

There is a lot of room for improvement – an aspect we’ll look at in detail in a different article of this series – but the removal of major bottlenecks, including increasing the percentage of a business that can be held by a foreign company, has made businesses with a long-term view on India interested in more substantial commitments.

FDI flows are long-term in nature as a firm is investing in a local business or market. Apart from overseas investors interested in increasing FDI flows to India, the impact of a positive view on the country is visible on ETF flows as well.

According to Bloomberg data, in YTD 2017, India-focused equity ETFs listed on US exchanges have attracted inflows amounting to $637.3 million. The iShares MSCI India ETF (INDA) has been the biggest beneficiary of these flows, having attracted net inflows worth $586 million year so far this year.

Thus, the improved business and economic environment is leading to increased flow of money from overseas investors via multiple channels.

In the next article, let’s look at what specific advantages foreign companies see India bringing to the table.