Earlier in November, China’s Vice Finance Minister Zhu Guangyao had announced that the country will remove foreign ownership restrictions on banks along with easing stake-holding in securities firms, asset managers, and insurance companies.

At present, a single overseas investor can own a maximum 20% of a Chinese commercial bank and the overall cap on foreign investment in banks is 25%.

The announcement has invigorated global banks and financial companies several of whom, including JPMorgan Chase & Co. and Morgan Stanley, have reiterated their commitment to doing business in China. Others like Switzerland-based UBS Group intend to increase their stakes in their joint ventures with Chinese banks.

The new vision, whose implementation is expected to be slow, will help these global institutions access the deep and wide financial universe of the second largest economy in the world. It will address the long-standing concern of ownership ceiling for foreign companies at a time when China has been making efforts to enhance access to its financial markets.

Foreign banks’ ownership of Chinese banking assets is relatively puny. According to data from the China Banking Regulatory Commission, assets of foreign banks in China had stood at 2.9 trillion yuan ($436 billion) at the end of 2016, with the percentage of the country’s total banking assets (1.26%) being the lowest since 2003.

If all assets of foreign banks in China were collectively considered as a single entity, it would rank 58th in S&P Global Market Intelligence’s 2017 tabulation of the 100 largest banks in the world.

This relaxation in ownership limits will also reinvigorate the interest of foreign financial institutions in China.

At the beginning of this century, firms like Citigroup, Bank of America, Goldman Sachs and UBS, among others, had acquired stakes in Chinese commercial banks. However, at present, except for HSBC Holdings, which owns about a fifth of China’s Bank of Communications Co., all other lenders have divested their investments.

According to Fitch Ratings, this decision by China could heighten interest in the country’s smaller banks.

How do Chinese banks feel about the move?

Foreign banks are thrilled by the decision and are looking forward to steps which will detail its implementation. But what about Chinese banks?

The Asian nation’s banks dominate the global spectrum when it comes to size with four of them figuring in the top five. Let’s look at how stock prices of the ten largest banks of China have fared since the announcement on November 10.

Industrial and Commercial Bank of China

The Industrial and Commercial Bank of China (IDCBY) is the world’s largest bank by assets according to the 2017 report of the 100 largest banks in the world by S&P Global Market Intelligence. It has nearly $4 trillion in assets. 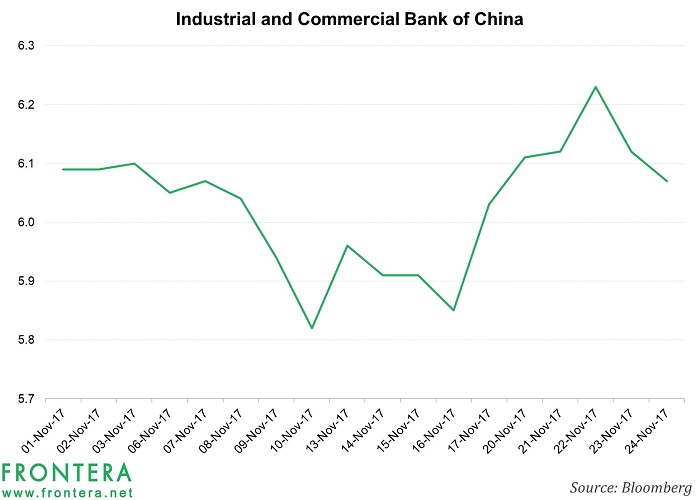 Its stock had declined by 2% on November 10 – the day when the announcement on foreign ownership limits in banks was made – compared to a day ago. A day later, it bounced back and closed 0.3% higher over the previous two trading days.

China Construction Bank (CICHY) is the second largest in the world by assets according to the aforementioned report. 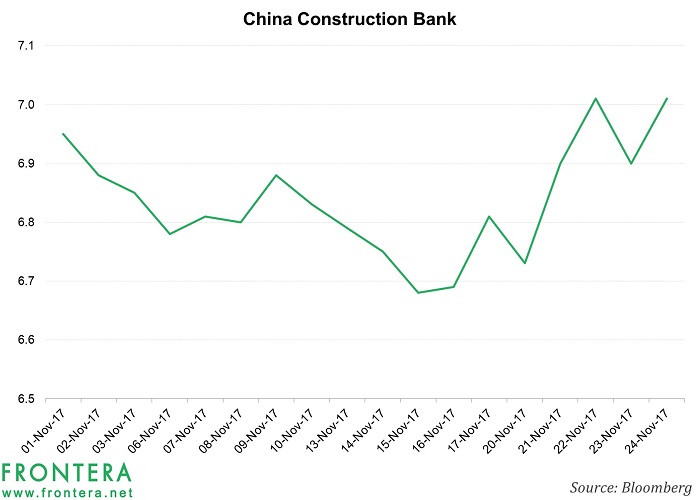 Its stock had declined 0.7% on the day of the announcement and continued to fall on the next trading day on November 13. By the end of the day, it had declined by 1.3% compared to its close on November 9.

The third largest bank in the world – the Agricultural Bank of China (ACGBY) by assets had seen its stock decline by 1.4% on November 10 compared to a day ago. 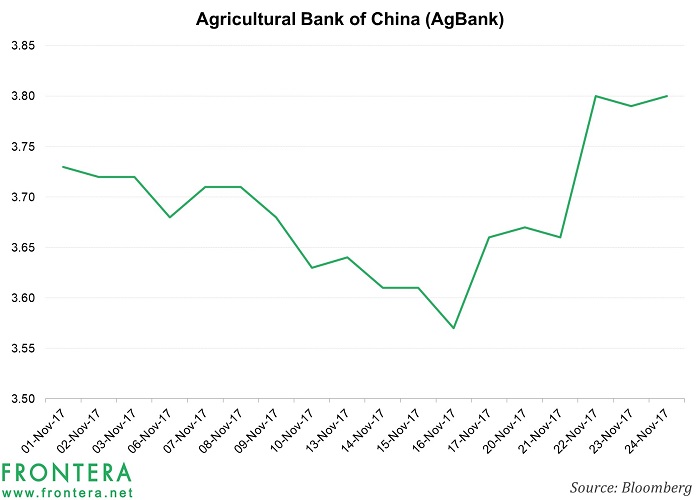 It bounced back a bit the next trading day with the decline since November 9 narrowing to 1.1%.

At present, the stock is up by 3.3% compared to its level before the announcement regarding foreign ownership levels in Chinese banks.

Bank of China (BACHY) – with nearly $3 trillion in assets according to the aforementioned 2017 S&P report – is the fourth largest bank in the world. 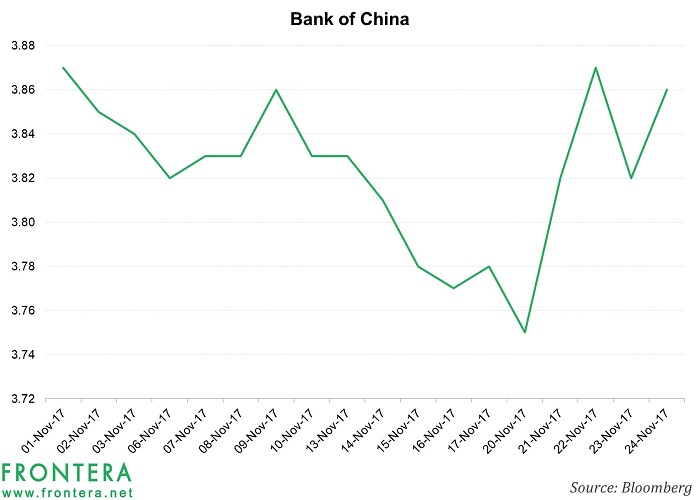 After the announcement by Vice Finance Minister Guangyao on November 10, its stock had declined by 0.8% from a day ago level. It was flat on the subsequent trading day.

As of November 24, its stock was trading at the same level at the end of the day as on November 13.

The shares of China Merchants Bank (CIHKY) have been one of three in this curated list of ten which had responded enthusiastically to the announcement by the government. 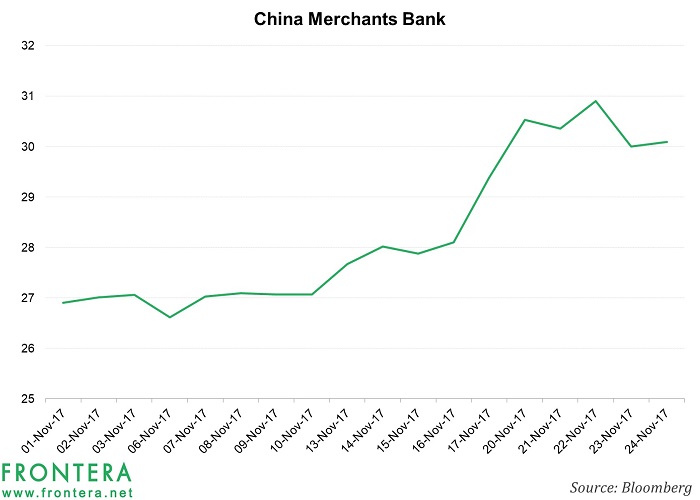 Though it was flat on November 10 compared to a day ago, it rose 2.2% on the following trading day.

Since November 9, the stock reached a peak of 14.1% on November 22 before shedding some of its gains.

After having fallen by 0.3% on November 10 from a day ago, the stock of Bank of Communications (BKFCF) reversed its losses the next day. 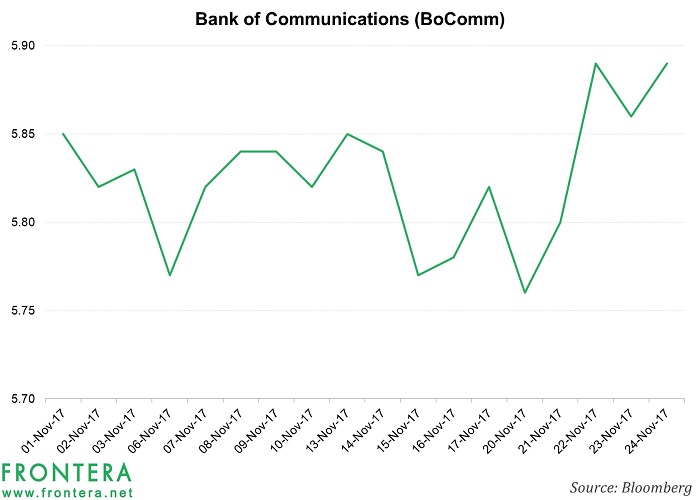 Since November 9, it has returned 0.9% until the week ended November 24.

Alike the shares of China Merchants Bank, those of Shanghai Pudong Development Bank have broadly risen since the announcement on November 10. 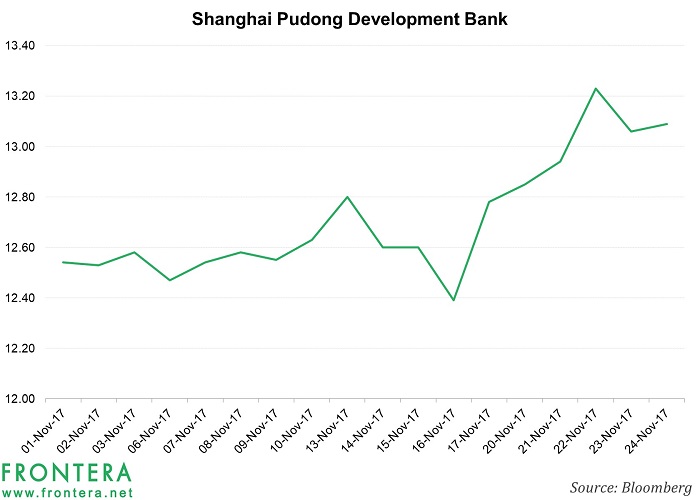 Its stock rose by 0.6% on the day of the announcement and continued rising on the next trading day.

By November 22, it had reached an intra-period peak by gaining 5.4% over its closing level on November 9 and is up over 4% at present since that day.

The stock of Industrial Bank Co. (601166.SS) had initially declined post the announcement, but later recouped its losses and gained the next trading day. 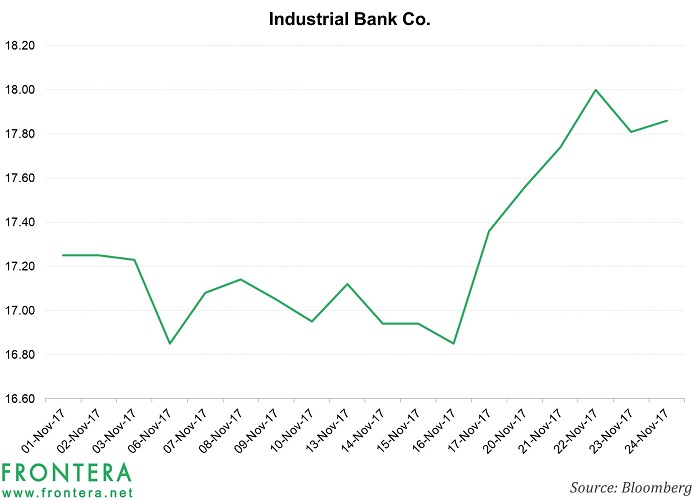 By November 22, the shares had risen over 5.5% compared to their closing level on November 9 and are trading above 4.7% at present.

The stock of the Postal Savings Bank of China has been the only one among the ten included in this review which has declined since the announcement on November 10. 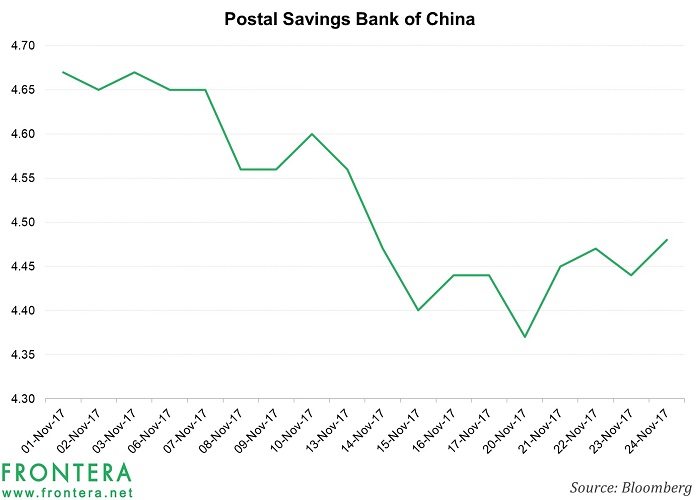 Initially, it had gained 0.9% over the previous trading day on November 9. But then it erased gains on the subsequent trading day and remains down by over 1.7% levels since that date.

The shares of China CITIC Bank Corporation (CHCJY) – similar to those of China Merchants Bank and Shanghai Pudong Development Bank – have shown enthusiasm about the announcement. 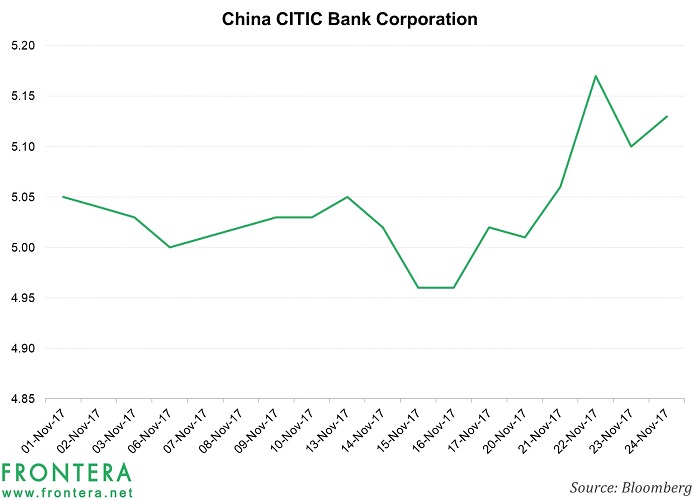 They were flat on November 10 compared to a day ago and posted some gains on the subsequent trading day.

Since then, they have broadly continued to rise and had gained 2.8% over their November 9 level by November 22 and even after some correction, are 2% up over those levels.

The following tables show the price-to-earnings multiples of these banks and analysts’ views on them: 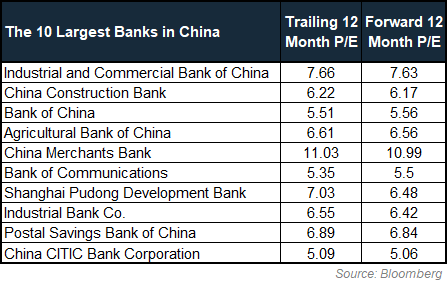