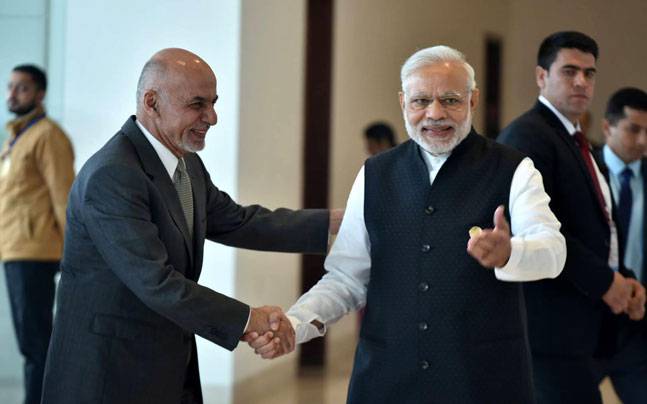 New transport links circumventing their obstructive neighbour could prove to be economic game-changers.

Regional allies India and Afghanistan are stepping up their efforts to strengthen commercial ties with the development of air and land transport corridors bypassing Pakistan, which obstructs trade between the two countries.

India believes bolstering trading links with Afghanistan will also help it to build an economic bridge to Central Asia, enabling it to access the region’s energy markets.

Deteriorating relations with Islamabad over security issues have prompted New Delhi and Kabul to find ways of circumventing Pakistan on the economic front.  Annual bilateral trade between Afghanistan and India is currently relatively low, at around $685 million, but Afghan President Ashraf Ghani wants commerce and investment flows between the two countries to reach $10 billion over the next five years.

Set to launch on June 18, a new air corridor, first proposed by Ghani, will see regular cargo flights between Kabul and New Delhi.  It follows India’s move last year to begin developing the Iranian port of Chabahar, which will eventually enable Indian traders to skirt round Pakistan into Afghanistan and on to Central Asia.

India-Afghanistan ties have long been close. But they have been stepped up under Indian Prime Minister Narendra Modi, not least because India has been concerned about Afghan stability and recognises its potentially huge commercial value – Afghanistan’s untapped mineral wealth is estimated to be of the order of $1 trillion. India has trained Afghan security staff, provided some military hardware and is implementing $2 billion worth of infrastructure projects to help the rebuild the country.

For its part, Pakistan has been unsettled by the growing ties between its neighbours and fears its own security and economic interests could be undermined by the new corridors.

Ghani plans to use the air cargo service, funded by the Afghan government, to transport a number of commodities, including minerals – emeralds, rubies and lapis lazuli – and dried fruits and carpets. He is keen to see imports of medicine and high value consumer goods on the return flights.

The new transport links have come about because Pakistan obstructs trade between its neighbours. Islamabad allows Afghanistan to export to India through its territory as part of the Afghanistan-Pakistan Transit Trade Agreement (APTTA), but prevents Indian goods flowing in the opposite direction.  The accord allows Afghanistan to import through Pakistan’s seaports. But the APTTA has come under strain, with Kabul accusing Pakistan of imposing restrictions on the Afghan border.  Earlier this year, it protested to the World Trade Organisation after closures led to a $90 million loss in trade.  With Pakistan keeping India out of the APTTA, Kabul and New Delhi have been keen to explore other trading options.

The launch of the air corridor comes as work proceeds on the huge Chabahar deep-water port project, an Iranian-Indian joint venture.  New Delhi is channelling $500 million into infrastructure development and has pledged to invest an additional $16 billion in the facility’s free trade zone.  A separate trilateral agreement between New Delhi, Tehran and Kabul will see a road and rail transport corridor running from the port to Afghanistan.  India’s state-owned IRCON construction firm is to build a $1.6 billion railway linking Chabahar to Zahedan on the Afghan border, which connects with Turkmenistan and Kazakhstan.  From Zahedan, the line will be extended to the south-west Afghan city of Zaranj. India has already built a 218-kilometre road linking the latter to Delaram a major transport hub in western Afghanistan.

The Chabahar development had been discussed for many years, but was given impetus by the 2015 Iran nuclear deal, the subsequent removal of international sanctions and China’s rival development of Gwadar, a key hub on the ambitious $45 billion China-Pakistan economic corridor. India is increasingly concerned about China’s growing influence in the region. As well as Gwadar, Beijing has been developing ports in the Indian Ocean as part of its ‘String of Pearls’ strategy aimed at exerting influence over South Asian sea routes.

While Chabahar could help India rival China’s plans for the region, there are a number of risks associated with the project. Remaining US sanctions against Iran and uncertainty over the nuclear deal might deter western companies from supplying equipment for the port and the rail links. There are reports that the issue may have already held up construction work. The Taleban could also attempt to sabotage sections of the railway running through Afghanistan.

Although these challenges may cause disruptions and delays, India appears determined to forge ahead with the Chabahar corridor, which has been given new impetus by the need to support Afghanistan in the face of the resurgent Taleban and India’s formal membership of the Shanghai Cooperation Organisation, the Eurasian political, economic and security grouping.  India is particularly keen to tap Central Asia’s oil and gas reserves to reduce its dependence on energy supplies from the Middle East.

While bypassing Pakistan will likely throw up new logistical and diplomatic problems, New Delhi’s fraught relations with Islamabad leaves it with little other choice.