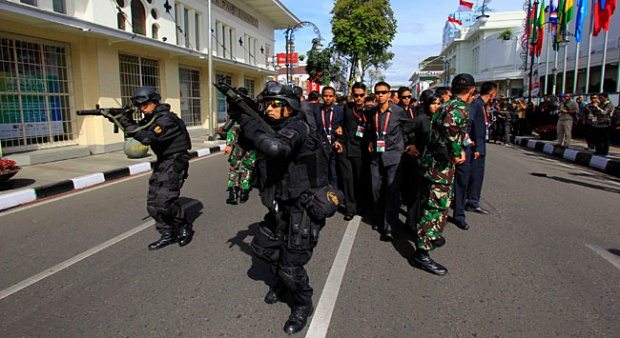 Operating under the alias Bagong, Basri was caught in a joint operation run by the local police and military in Poso on Sulawesi Island.

Less than two months ago in July, Indonesia’s most wanted terrorist, Santoso, then leader of the MIT, was killed in a gunfight with troops in a targeted mission. Also known as “Abu Wardah,” police and military forces had been conducting an intense manhunt for Santoso for over five years.

Both the capture of Basri and the killing of Santoso were carried out under Operation Tinombala, which has resulted in the deployment of more than 3,500 soldiers and police officers in Poso since it was launched in March 2016. Indonesia’s newly appointed national police chief, General Tito Karnavian, said security personnel are still searching for Ali Kalora, who is the third in command in the group.

MIT is responsible for a number of deadly attacks on domestic security forces, and is believed to maintain a network of trained militants around the Indonesian archipelago. In November 2015, MIT uploaded a nine-minute video online that called for attacks on the Jakarta police headquarters and the presidential palace.

Ali Fauzi Manzi, a deradicalized former militant who was the younger brother of the two architects of the 2002 Bali suicide bombing, said in July that “certainly the target of the group [MIT] is the police and the military, because of their anti-terror operation [in Poso].”

Recent military successes have helped quell concern in Indonesia that MIT could evolve into a force comparable with the Abu Sayyaf militant group in southern Philippines or extremists in southern Thailand.

However, myriad Indonesian terrorists cells have cropped up much further afield than Poso, and even beyond the archipelago. Most notably, it is believed that an Indonesian militant by the name of Bahrun Naim is directing attacks in Southeast Asia from the ISIS stronghold in Raqqa, Syria. Naim’s network of militants is based in his hometown of Surakarta (also known as Solo), a historic royal capital on the island of Java, which has become a breeding ground for radicals in recent years. The city of 800,000 is also the hometown of Indonesian President Joko Widodo.

Mass terrorism in Indonesia, the world’s most populous Muslim-majority country, has been largely contained since the mid-2000s when authorities effectively closed down Jemaah Islamiyah – al Qaeda’s franchise in the region.