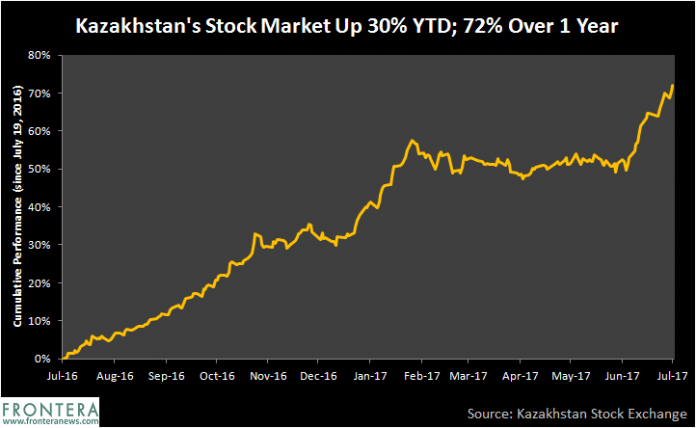 This is post 1 of 3 in the series “Kazakhstan Is Transforming With Privatization, Diversification and Competition on Its Agenda”

Kazakhstan is transforming; stock market up 30%

Kazakhstan is showing encouraging signs of late with the frontier market (FM) (FRN) charting a course to showcase its development-friendly agenda and the advances that the country is making. The economy, especially the labor market, is far less regulated now than it was a decade ago. Reforms are also in place focusing on increased private sector participation, and labor market dynamics. 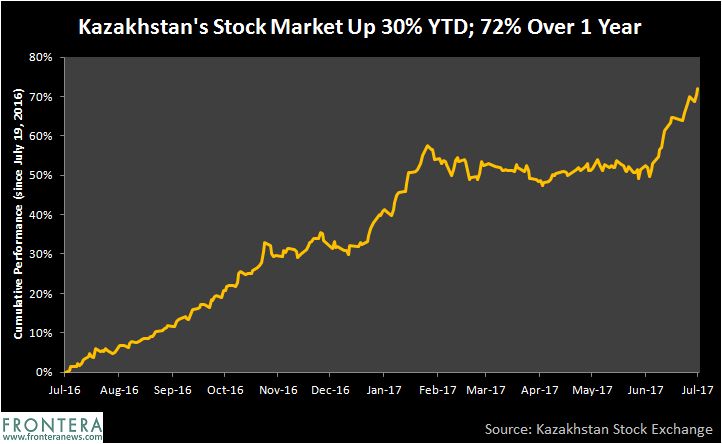 The Kazakhstan Stock Exchange Index KASE is up over 30% so far this year (as of July 19), primarily driven by performance in the materials sector (up 72% YTD) and the financials (up 41% YTD). The KASE index is up 72% over the past 1 year.

Growth to pick up in oil-rich Kazakhstan

In the past, Kazakhstan’s oil-rich landscape has helped the Central Asian (AAXJ) (VPL) nation outperform its neighbors. The mammoth Kashagan oilfield is one of the biggest hydrocarbon discoveries in the world in recent decades. However, the oil price slide over the past 3 years has affected this resource-rich country. The slide in the price of oil — which accounts for 20% of GDP, about 60% of exports, and 50% of the government’s budget in Kazakhstan — has led to tightening of economic conditions in the country.

However, two tailwinds should serve to boost growth in this landlocked country:

In the financial space, the banking industry is in a consolidation phase with a string of bank mergers and takeovers being announced. Recently (June 15), Halyk Savings Bank of Kazakhstan JSC (KASE: HSBK) acquired 96.81% stake in Kazkommertsbank JSC (KASE: KKGB) to create the largest bank in Central Asia, holding around 37% of the Kazakhstan’s financial assets. Meanwhile, mid-sized banks, Bank RBK (KASE: INBN) and Qazaq Banki (KASE: SNBN), are also in the talks of a merger.

Kazakhstan is also poised to tap the international capital markets soon with the launch of its Astana International Exchange (AIX). Kazakhstan’s current stock listings represent just 5% of its GDP as compared to Eastern European (VGK) (EZU) (HEDJ) countries where this figure is closer to 20%. Slated to open in the second half of this year, the AIX wants to change that, and become the main platform for the initial public offering of Kazakhstan’s major companies, which falls in line with the country’s privatization program as discussed next.

This is post 1 of 3 in the series “Kazakhstan Is Transforming With Privatization, Diversification and Competition on Its Agenda”