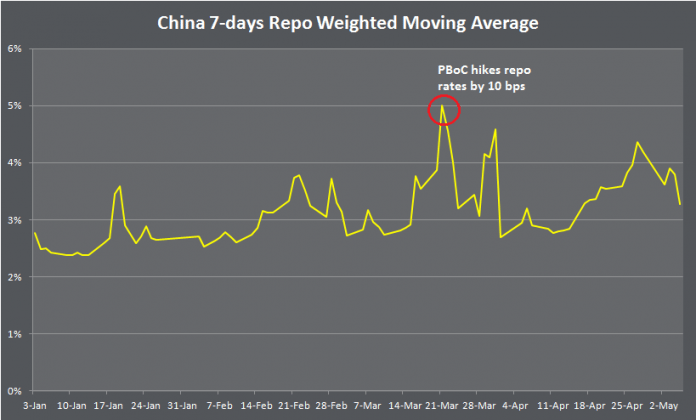 This is post 3 of 4 in the series “Kyle Bass Sees the Beginning of a Credit Bubble China, Provides Hard Evidence”

A key indicator identified by Kyle Bass during his recent interview with Bloomberg is China’s cleared and uncleared interbank lending rate. Bass sees clear signs of trouble in interbank bank lending in China (FXI). Investors should watch for a rate spike, which would be an indication of a time when banks (ACGBY) (BACHY) (CICHY) (CVBHY) (CIHKY) stop trusting each other, explained Bass.

“When an economy is at max leverage supported by interbank funding, you see sudden spikes in the interbank rate every now and then,” said Bass, “so you would see China’s interbank rate, which usually ranges between 3-4 %, suddenly reaching 9% and then settling back at 5%.” 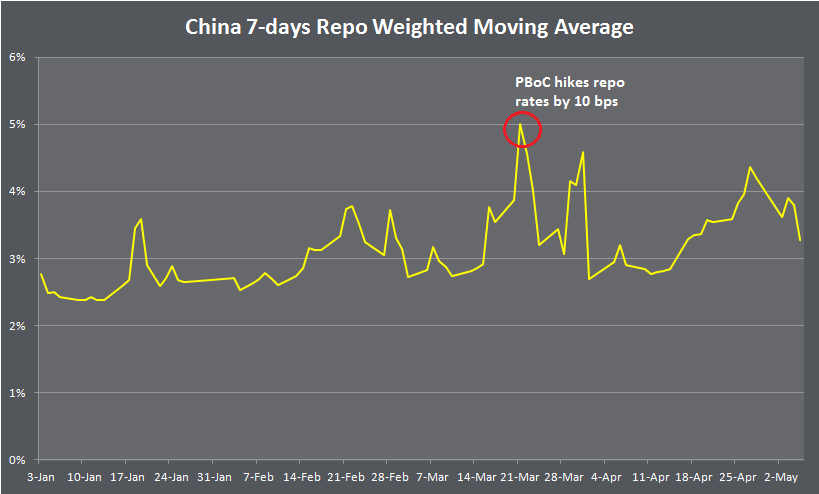 The recent regulatory crackdown on banking in China has also contributed to the tightening seen in the interbank market. Over the past month, especially, (see chart above), interbank lending rates have been trending higher. The chart above depicts the recent trend in China’s 7-day repo rate.

The most prominent spike in the chart above relates to the recent monetary policy tightening attempt by the PBoC (People’s Bank of China). On March 16, 2017, the PBoC raised interest rates on short-term open market operations by 10 basis points, leading to a massive spike in the repo rate. Reverse repo rate in China has averaged 3.2% over the past five years.

What’s also noteworthy is that the gap between the repo rate covering all counter parties (banks & NBFCs) — and that covering only banks — has widened. This is an indicator of tight liquidity conditions at NBFCs (non-banking financial institutions). These include financiers such as Anbang Insurance, which have recently come under tougher regulatory scrutiny in China.

What does this mean for your investment?

Sustained elevated rates could cause significant volatility in financial markets, particularly the bond market; given the significant repo leverage of funds. Borrowing costs may also rise as a result of an upward pressure on bank lending rates, consequent to the rise in interbank rates. Currently, funds account for a good 32-33% of the interbank repo market.

Interbank rate volatility in China (YANG) (FXP) (CHAD) is expected to remain high over the near term.

This is post 3 of 4 in the series “Kyle Bass Sees the Beginning of a Credit Bubble China, Provides Hard Evidence”