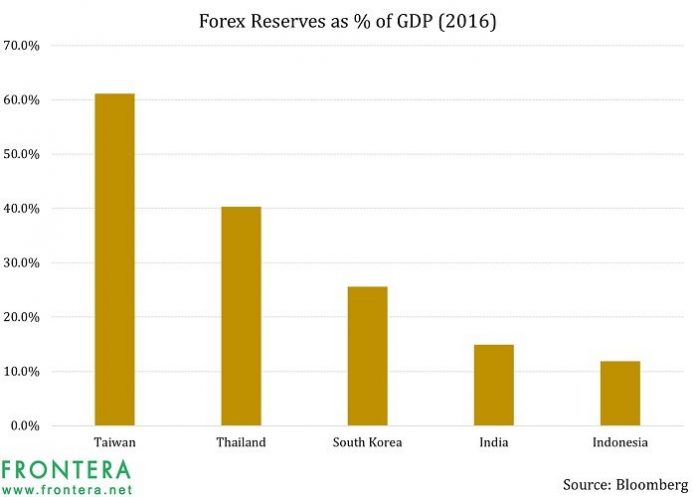 This is post 2 of 2 in the series “Record Forex Reserves in Asia: A Buffer for US Monetary Tightening”

Weakness in the greenback for the past few months and relatively easy monetary policy in the US prior to this year have provided emerging markets with an opportunity to build up their forex reserves.

In the previous article, we looked at five countries from emerging Asia which have seen their international reserves surge to record highs. This is not coincidental. These governments, among those in other emerging nations, have learned their lessons from the past. 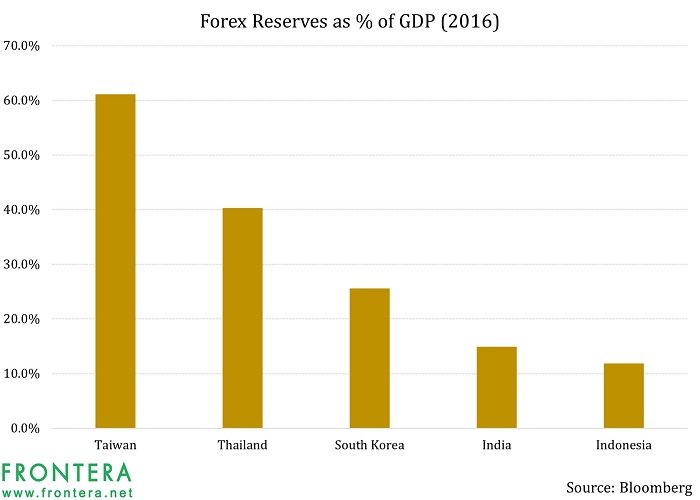 In May 2013, then US Federal Reserve chairman Ben Bernanke, in a testimony to the Congress, expressed that the central bank could soon be ready to dial down the amount of bond buying from the prevailing level of $85 billion per month.

Emerging markets had borne the brunt of this announcement as it resulted in capital flight from these relatively risky countries back to the safety of US assets.

The impact of the ‘taper tantrum’ can be seen from the graph below. The Indian rupee (INR) was hammered against the US dollar as depicted by the sharp spike seen on the left-hand side of the graph. 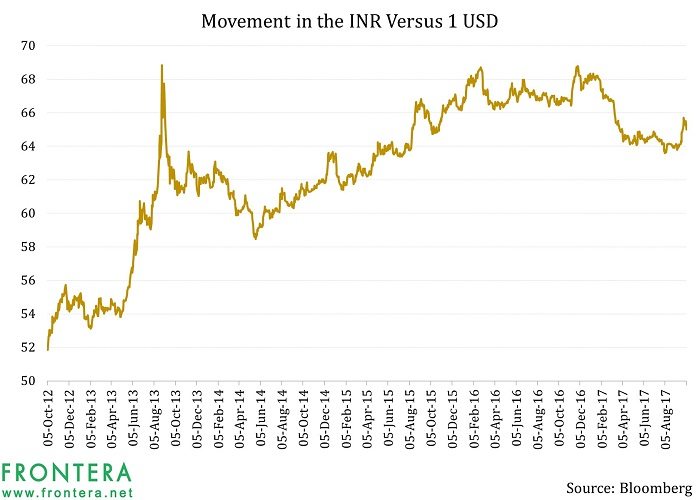 Usefulness in the near future

The recent build-up in foreign exchange reserves will be a useful cushion for emerging markets, given the lessons learned from the ‘taper tantrum’ episode of 2013.

Back then, central banks did not have enough reserve assets to defend their currencies. Therefore, a nose-dive in their domestic units against the dollar resulted in severe hardship for importers in these markets. Given their import-driven economies, the event also negatively impacted the broader country.

With an enhanced buffer in the form of foreign currency, central banks in emerging markets are now much better prepared for a monetary tightening cycle in developed markets. Given current events, the timing could not be better. In its September 20 meeting, the US Federal Reserve expressed its intent to reduce the size of its $4.5 trillion balance sheet and continue increasing interest rates.

In a September 20 meeting, the US Federal Reserve expressed its intent to reduce the size of its $4.5 trillion balance sheet and continue increasing interest rates.

Every time the US increases interest rates, it results in a rise in short-term yields, and depending on the view on inflation, medium and long-term yields can rise as well. This reduces the spread between emerging markets bond yields and US Treasuries, which in turn, makes the former less attractive especially given the security investors find in the latter.

Although there may not be any change in the underlying fundamentals of emerging countries, their assets will get beaten down if monetary tightening in developed countries proceeds, especially in the case of the US.

This is post 2 of 2 in the series “Record Forex Reserves in Asia: A Buffer for US Monetary Tightening”