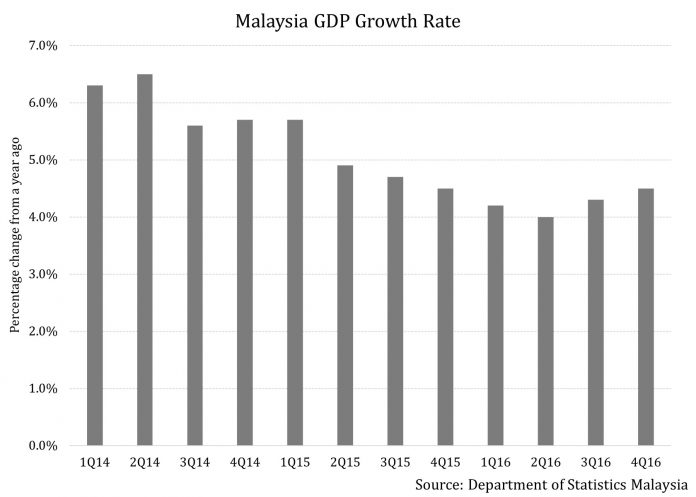 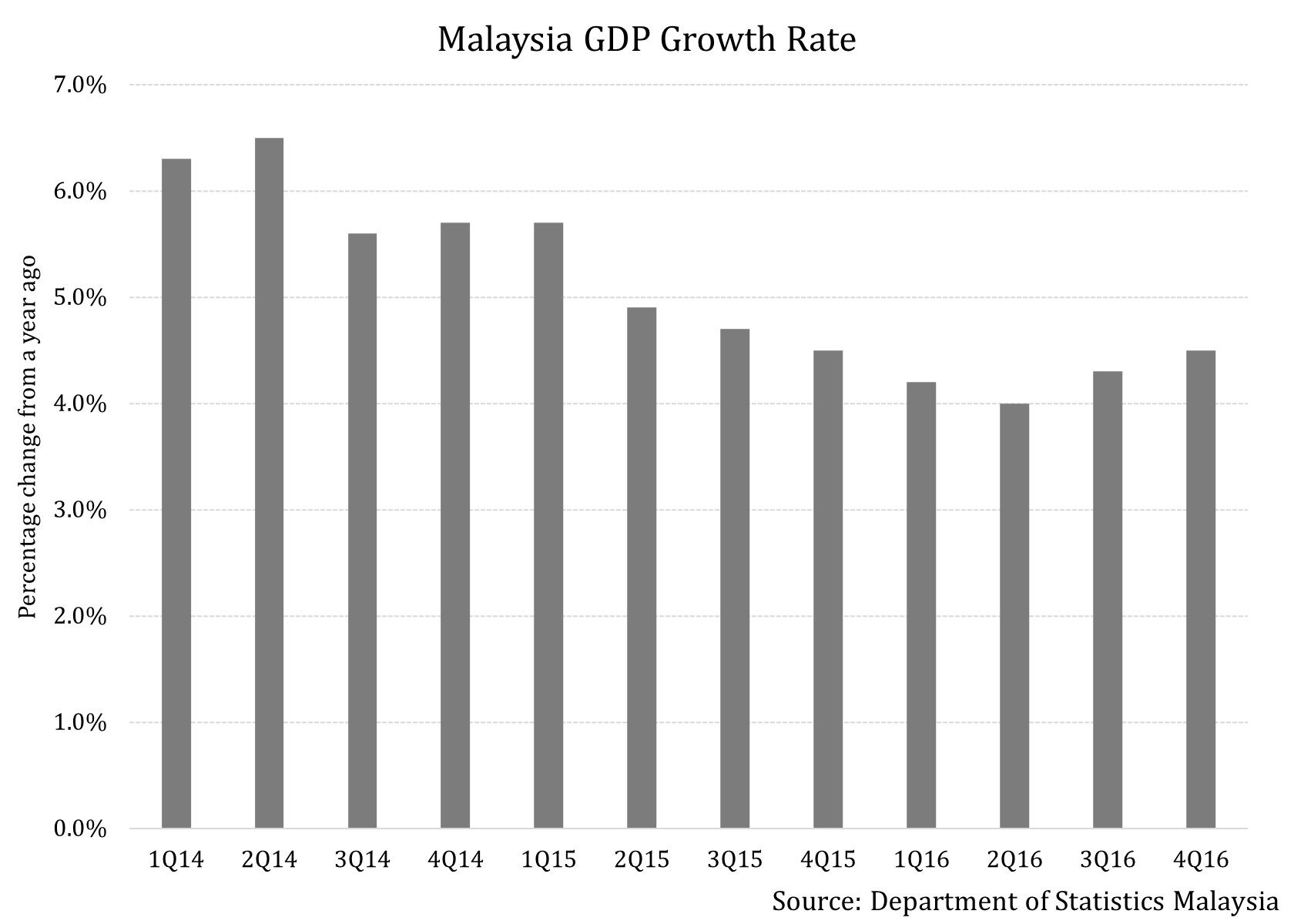 Q4 2016 growth was the strongest in one year and was powered by private consumption, which rose 6.2% for the period compared to a year ago. Strong exports, which rose 1.3% after having contacted in the previous quarter, were also responsible for the rise. Meanwhile, manufacturing activity picked up to 4.8% in the quarter from 4.2% a quarter ago.

The rise in crude oil prices (USO) (BNO) because of the production cut agreed upon by OPEC (Organization of the Petroleum Exporting Countries) and non-OPEC members is also expected to be benefit Malaysia in 2017. It can provide a leg up to exports, which resuscitated in the last quarter of 2016.

Along with exports, low oil prices will support government revenues. Public sector spending fell 4.2% in Q4 2016, thus dragging on economic activity. Higher public spending is expected to provide a boost to the infrastructure sector. The Malaysian government has a very conservative take on crude oil prices for 2017, at about $45 to a barrel, which should provide it with buffers when it comes to government revenue, should the price remain above that level.

This is even more prominent in light of the fact that Bank Negara Malaysia may not have more room to ease monetary policy due to higher expected inflation.

Another reason why the central bank would find it difficult to ease policy is the Malaysian ringgit. The currency has taken the brunt of low oil prices and their impact on government revenue. A rate cut does act as a stimulant to economic activity, especially when inflation is benign, but it also puts downward pressure on the domestic currency – something that the central bank does not want.

In December 2016, the central bank had taken action on a financial institution for misconduct regarding fixing the dollar-ringgit exchange rate. At this juncture, saving further devaluation in the ringgit assumes critical importance for the central bank.

Meanwhile, though higher oil prices are expected to ease global trade this year, these have to be seen in light of increased calls for trade protectionism around the world, especially the from US. While some benefit from oil prices cannot be ruled out, policy level changes pose a bigger threat to trade for now.

According to the Malaysian Institute of Economic Research, trade with China, Japan and the US comprises one third of Malaysia’s total trade value. Meanwhile, according to the Institute of International Finance, Malaysia (ASEA) is the second most exposed emerging market after Mexico to changes in US trade policy. 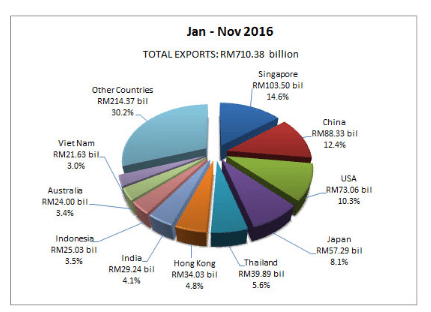 The US administration’s plan to impose a 20% border adjustment tax is expected to hurt Malaysia as 82.3% of its total exports by value are manufactured goods, according to MATRADE (Malaysia External Trade Development Corporation).

If the trade restrictions from the US come through, especially in the form of the border tax, which will make import of manufactured goods expensive, then it may lead to Malaysia pivoting towards China.

With the US walking away from TPP (Trans-Pacific Partnership), of which Malaysia is a party, the latter’s pivot towards China can be expected to come more quickly. In 2016, Malaysia’s Trade Minister Mustapa Mohamed stated that the country was looking forward to the China-led Regional Comprehensive Economic Partnership (RCEP) in case the TPP falls through. The RECP includes six countries apart from 10-ASEAN (Association of South-East Asian Nations) members.

The MSCI Malaysia Index is up 4.8% in YTD 2017 until February 17. But even this positive performance places it higher than only Indonesia amongst Asian emerging markets. It is far behind the Emerging Markets Asia Index, which has risen 9.3% in the same period.

The broad macroeconomic picture that we have painted for Malaysia in this article may would likely see one taking a neutral stance to Malaysian equities.

However, what is important to note is that domestic consumption will be key to Malaysian stocks in 2017. While higher government spending may play a supporting role in improving the macroeconomic picture of Malaysia, consumers will be at the forefront, driving investor sentiment.

Although the implementation of a border tax by the US would hit Malaysian exports and stocks harder than more service-oriented exporters in Asia, movement in the ringgit will also be a key indicator when measuring global investment sentiment.