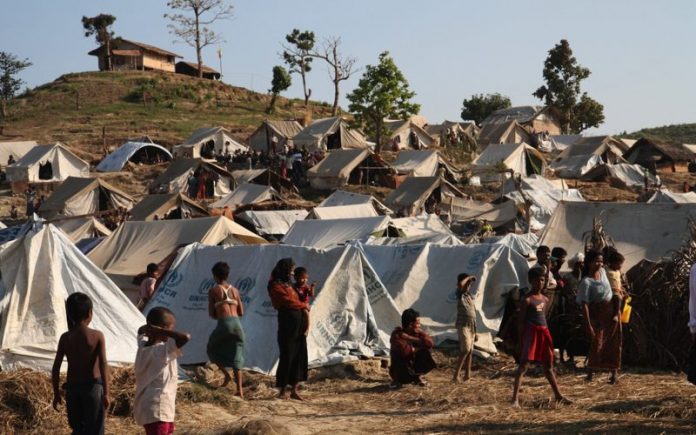 A spate of recent incidents signals a deteriorating security situation in Rakhine state once again. This time, there is evidence of a more organised and transnational threat; a rebel group on the front foot that requires an intelligent security response – rather than a knee jerk military reaction that exacerbates the situation.

Despite a turbulent end to last year, Myanmar’s Rakhine state has been quiet since February. But political officials recently called for increased security following several killings of Rakhine village headmen by masked assailants. Hundreds of Buddhist villagers are fleeing Maungdaw Township, and troops on either side of the Bangladesh-Myanmar border are on ‘high alert’.

This article will assess the militant threat with respect to the difficulty of managing the Bangladesh-Myanmar borderland. This space is highly conducive to rebel activity, allowing terrorist networks to grow in sophistication – and signalling the need for a pragmatic security response.

Rakhine’s tormented history of ethnic conflict came back into sharp focus in October 2016, after a series of attacks on border outposts in Maungdaw, by a group calling itselfHarakah al-Yaqin (Faith Movement). Now known as the Arakan Rohingya Salvation Army (ARSA), this was the first Rohingya insurgent group to form since the late 1990s. A reportby International Crisis Group (ICG) provides a firmer picture of this organisation.

Myanmar troops recently uncovered a rebel camp in the Mayu Mountains of northern Rakhine, which separate the majority-Rohingya districts of Maungdaw and Buthidaung. Here, thick jungle cover and inaccessible river crossings are ideal for skilled insurgents. The camp consisted of a tunnel network containing weapons, rations, and training materials. It is unknown how deep this clandestine tunnel infrastructure could run.

According to ICG, ARSA is directed by about 20 Rohingya émigrés in Saudi Arabia and led by 20 field officers with guerrilla training and combat experience. Their reliance upon improvised explosive devices (IEDs) and hit-and-run attacks on security personnel has generated comparisons with the Malay-Muslim insurgency in Southern Thailand. These conventional tactics are combined with a decidedly modern communications strategy, including the use of WhatsApp to coordinate attacks.

Their leader is Ata Ullah, a Pakistan-born Rohingya who grew up in Mecca, Saudi Arabia. ICG subsequently speculates that ARSA may have substantial private backing in Saudi Arabia and the Middle East. There is stronger evidence of ARSA’s connections with Bangladesh, where the murky borderland politics have been exploited to the rebels’ advantage.

The 271km-long Bangladesh-Myanmar border is notably porous, making the logistics of tracking militant movements difficult. For years it remained un-demarcated, despite successive boundary agreements. Although work started on a border fence in 2009, because of funding shortages it remains incomplete. The border is thus a hive of criminal activity, with several locations notorious for trafficking operations, including the Bangladeshi towns of Teknaf and Cox’s Bazar, and the Naf River crossing.

Teknaf is a major transit point for illegal arms in the region. Bangladeshi authorities report growing ‘demand for sophisticated arms’ among regional political groups, including ARSA rebels and militants in and around the Chittagong Hill Tracts, a vast hilly area in southeastern Bangladesh. At Teknaf and Cox’s Bazar, ARSA militants can get their hands on all sorts, from Russian-produced AK-47s to anti-tank equipment manufactured in the US and China.

On top of criminal gangs, beneficiaries of such trade include high-level bureaucrats, politicians and military officials. This is perhaps unsurprising given that Myanmar’s former military regime was steeped in corruption, with military officials deeply implicated in organised crime networks.

In this region are hundreds of thousands Rohingya refugees. Teknaf contains tens of thousands of Rohingya, representing a strong base and recruiting ground for ARSA. ARSA purportedly boasts strong local support from young, impatient Rohingyas ‘ready to fight for their rights’. Such support distinguishes ARSA from predecessors like the Rohingya Solidarity Organisation (RSO). Although ARSA’s estimated membership is 300-400, this may increase substantially over the next 6-12 months.

Ullah’s non-Burmese origins reflect the Rohingya diaspora’s importance. Locations like Teknaf are ideal for Rohingya from Pakistan, Afghanistan and elsewhere to join up with ARSA. Ullah himself denies any links to foreign Islamists, and despite allegations to the contrary, links with the Taliban have been debunked. But there remains an outside possibility that ARSA’s ideology could be subsumed under a broader jihadist agenda.

What action should be taken?

The military must avoid indulging in a ruthless and excessive ‘clearance operation’, as they did last October. Since the military sealed off northern Rakhine, blocking access to media and NGOs, the number of casualties from that operation is altogether unclear. But it is believed to be high. Repeating this failed strategy will, in Lynn Kuok’s words, lead to ‘broader radicalisation and a spiral of violence’, catalysing support for ARSA.

Unrestrained aggression hinders a more sophisticated bilateral security policy, which is in both countries’ interest. Despite the many vows and memorandums of understandingsigned between both countries on these issues, Myanmar has demonstrated a lack of political will to engage with Bangladesh. Closer engagement and more open information exchange are needed, particularly as a counterweight to both countries’ unsophisticated surveillance techniques and technologies.

Both countries deploy armed speedboats in the Naf River, to patrol their respective coastlines and particularly the border near Maungdaw Township. But these patrols have caused problems in the past. In February, a Myanmar patrol boat accidentally opened fire on a Bangladeshi fishing vessel, killing one fisherman inside. Given the extent of cross-border movement, it is hard for forces to distinguish between civilians and insurgents.

On land, unidentified landmines planted by rebel groups in the past present a security risk for both sides. Because the border is poorly demarcated, there is constant friction between border forces. Despite extensive anti-guerrilla training, because of these factors military efforts become rather confused and disjointed; a reality that is exploited by rebel forces, who have a better overall understanding of this terrain.

Lastly, it is paramount that Myanmar and Bangladesh work together to tackle the root cause of this problem. Myanmar’s denial of citizenship to the Rohingya has been matched by Bangladesh’s controversial plans to push ahead with its Thengar Char relocation programme. Political exclusion will push the youth into crime and incentivise trafficking and militant groups. Being more inclusive is thus in both countries’ security interests.

Clearly, Myanmar de facto leader Aung San Suu Kyi intends to treat this as a security problem, and not as a broader human rights concern of restoring the Rohingya’s rights and political freedoms. Notwithstanding her limited control over the military, her outright denial of the problem has created in ICG’s words ‘a climate of impunity’. It remains important to heap international pressure on Suu Kyi’s government to form a constructive solution. Until that happens, ARSA will exploit the political environment to generate support for an insurgent movement that has exploded back to life.

Alexander Macleod is a doctoral researcher at Newcastle University with a focus on Southeast Asian politics and geography. Article as appears on Global Risk Insights: http://globalriskinsights.com/2017/07/rakhine-demands-security-response/