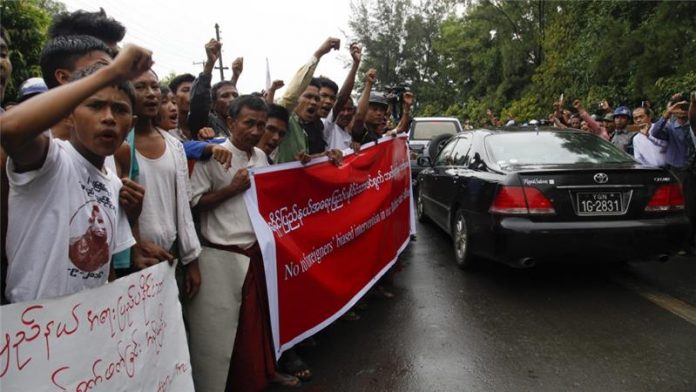 Within days of being appointed to lead the commission on Rakhine, former UN Secretary General Kofi Annan managed to provoke ire on both sides of Myanmar’s most troubled state.

Buddhist hardliners protested that international agencies favor the Muslims while locals argued that their feelings will never be understood by a foreigner. Even so, the commission has been moving forward, with Annan meeting religious, political and community leaders.

The commission was created amid an international outcry that Myanmar’s Nobel Peace Prize winning de facto leader Aung San Suu Kyi was ignoring the plight of Rakhine’s Rohingya population, who have been denied citizenship in Myanmar for decades. Citing many generations of residency as proof of their native status, Rohingyas have become increasingly vocal since the country’s first democratic elections last year.

But despite its liberal credentials, the official position of Burma’s National League for Democracy government has been to refer to the Rohingya as the “Muslim community of Rakhine State.”  It has denied their requests for citizenship, repeating claims that they are illegal immigrants from Bangladesh to the north.

Many Buddhists simply refer to the Rohingya as “Bengalis” and loudly maintain that they will not accept their citizenship. In squalid refugee camps, Rohingyas who have fled to the border area from their traditional communities in the face of state-sponsored persecution are reportedly prevented from leaving without permission from the military.

Estimates differ as to whether Rohingyas in Rakhine number 100,000 or several million. What is known is that hundreds of thousands have attempted to flee the country by boat to Indonesia, Thailand and Malaysia – and hundreds, maybe thousands, have perished in the Bay of Bengal.

How can Annan’s commission reconcile such differences? First, it’s essential to understand the role of armed groups fanning multiple conflicts across Myanmar.

Myanmar’s   federal   system   has   been   wracked by ethnic warfare ever since independence. Despite successive efforts by the nation’s army, the Tatmadaw, to bring rebel states to heel, the country has 18 ethnic militias, each one engaged in running their own proto-states in the hinterlands of Myanmar. The following are only the major ones:

Composed of defectors from the now-defunct Communist Party of Burma, created in 1989, the UWSA is the largest military force next to the Tatmadaw, and the single biggest threat to state sovereignty. With a fighting force of up to 20,000 in Shan State, it possesses heavy weapons and sophisticated military vehicles, including Mi-17 helicopters, although it’s not known to use terrorist tactics nor target civilians in government-controlled areas.

Centered in the country’s north east, the Wa are ethnically Chinese and draw support from China – at times not quite too covertly. The group’s goal is to establish an autonomous ‘Wa State.’

Beyond contributions from China, the group finances itself through drugs and weapons trafficking among other criminal enterprises.

The military wing of the Kachin Independence Organization (KIO), the KIA is the second-largest ethnic militia, commanding up to 10,000 active rebels and similar numbers in reserve. A ceasefire between the KIO and the government broke down in 2011 when the military attacked a KIA outpost near the Chinese border in Kachin State.

While many in the KIA claim to be fighting for an independent state in Kachin and violent skirmishes flare up with the Tatmadaw, essentially this conflict is rooted in economics and access to exploit vast natural resources. Smuggling lines for jade, gold and rare expensive timbers double up as runs for drugs and human trafficking.

Despite renewed fighting in recent years, strong ethnic Chinese influences and evident interest from Beijing in the region, the KIA has been negotiating with the government for an improved federal relationship.

Armed Muslim groups have historically taken advantage of the porous border between Myanmar and Bangladesh to stage operations before fleeing for safe haven. Increased state control of the border areas and a tight grip on Muslim communities has limited attacks more recently.

Only two of 154 reported terrorist attacks in Myanmar between 2001 and 2015 are suspected to have been perpetrated by Muslim or, more specifically, Rohingya groups. Both were carried out in Rakhine State and directed at Tatmadaw and Border Guard forces.

The RSO began in the 1980s as an armed branch of a Rohingya political organization advocating inclusion in the state of Myanmar. Operating largely from Bangladesh, the group has been severely degraded by direct action from both the Bangladeshi military and Tatmadaw. Today it retains very little operational capability.

Myanmar’s tactics against ARNO are particularly enlightening. There hasn’t been a single terrorist attack in Myanmar directly attributable to ARNO since 2001, yet the Burmese government made significant efforts to establish notional links between the organization, al-Qaeda and the Taliban after the September 11 attacks in the US.

Burmese intelligence also offered up information on alleged links to ethnic separatist militias along the Myanmar-Thai border. While deemed plausible by their American recipients, these reports were no doubt intended to blunt international condemnation of heavy-handed attacks on the Rohingya under the auspices of supporting the US-led War on Terror.

The status of the Arakan Mujahedeen is harder to ascertain. Statements from Pakistan-based terrorists in 2013 and video footage pointed to a terrorist unit composed of Bangladeshis, Indonesians, Burmese and Pakistani members. The group claimed to wage significant attacks against Tatmadaw and Buddhist citizens, but little supporting evidence exists.

Al-Shabaab last year released an exhortation for Muslims in Bangladesh, Indonesia, Thailand and Malaysia to “take the pivotal role in alleviating the suffering of the Muslims in Myanmar.” Along with protecting Rohingyas fleeing the state, neighboring nations should “mobilize men, money, and resources to defend the honor of the persecuted Muslims and repel the savage attacks of the polytheists,” al-Shabaab’s spokesman declared. Given that al-Shabaab has no operational reach beyond the African continent, it’s unlikely that these comments would pose any threat beyond potentially encouraging local actors.

When sectarian violence raged in Rakhine in 2012, the Pakistan-based Tehreek-e-Taliban, or TTP, released a statement calling for the severing of relations with Myanmar. “Otherwise, we (TTP) will not only attack Burmese interests anywhere but will also attack the Pakistani fellows of Burma one by one.”

Four years have passed since this threat, with no resulting attacks, and while TTP has also released more recent statements encouraging the Rohingya to adopt violent jihad to defend themselves, it’s unlikely that the TTP itself has any real aspiration for action within Myanmar. Given the beleaguered position of the Rohingya, there are unlikely to be significant attacks without considerable outside support.

The Afghan Taliban, Lashkar-e-Taiba, members of Jemaah Islammiyah, and others have given lip service to supporting jihad inside Myanmar. Some have even claimed to be fundraising for attacks and training to be carried out by Rohingya. Yet little-to-no operational activity has actually taken place, reflecting the general aversion among Myanmar’s Muslims to violence.

At this time, ISIS cannot be described as having anything greater than an aspirational interest in Myanmar. Although the Rohingya community has exploitable grievances, their desire to obtain citizenship within a federal Myanmar is likely to preclude any significant cooperation with ISIS.

The very real threat of mass collective punishment by both Buddhist Nationalists and the Tatmadaw is likely to curb any terrorist impulses.

Our special report on Myanmar continues on Monday with an assessment of the factors sustaining the world’s longest running ongoing civil war. The authors are Blake Herzinger and Jillian Claunch, analysts at ISS Risk, a frontier and emerging markets political risk management company covering North, South and Southeast Asia from headquarters in Hong Kong