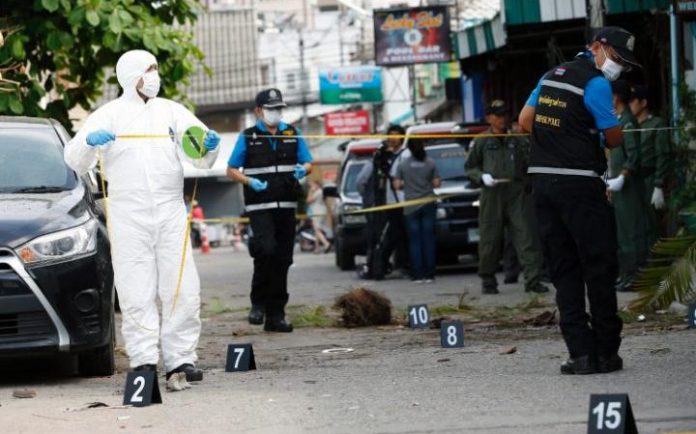 On a three-day celebration of the Thai Queen’s Birthday and Mother’s Day, a series of attacks ripped through resort areas, killing four and injuring many more.

Further mayhem had been planned. Since last weekend’s attacks, explosive devices have been picked up in multiple locations. The timing was a week short of the one-year anniversary of the Erawan Shrine bombing in Bangkok that killed 20 and injured 125.

Yet Thailand’s military government insists the attacks weren’t acts of terrorism. So who is behind the violence?

A familiar state of denial

Denial of terrorism isn’t surprising. Thailand, as other countries in the region, have existed in this double-speak mode for some time. As with the Erawan Shrine bombing and aborted Sathorn pier bomb, also one year ago, the authorities refuse to apply the label of “terrorism.” The issue here is that by ignoring the obvious nature of the events, or reinventing them as non-terrorist, the authorities risk further threats from those behind the attacks.

The combat indicators are clear. Our initial analysis directed us toward the strong possibility of a connection to the Southern Thai insurgency now reaching further north. With more time to critically assess the evidence leading up to this series of attacks, it remains the only logical conclusion. This is a game changer in the orientation of the insurgency and an indicator that there will be more attacks to come.

While southern insurgents are the most likely culprits, we are dealing with a state of denial and a military government that is patently trying to present things in a different light. Take the initial statements on Friday by the police in Hua Hin: “For sure we know the incidents are not linked directly to any kind of terrorism.” This was reiterated by the deputy police spokesman Piyapan Pingmuang: “I reaffirm that it was an act of local sabotage, not terrorism. We do not have terrorism in Thailand.”

Indeed, no terrorism in Thailand.

Without getting into an exhaustive list of definitions on terrorism, let’s cut to the chase. In all probability, the use of explosives and IED’s are probably well covered within any list of exhaustive definitions of terrorism – at least in the real world, they are.

But in terms of what much of the world now considers as terrorism – Islamic terrorism, international terrorism and trans-regional terrorism can most certainly be ruled out. All three share a common theme: they are about mass casualties and publicity. Had this been, for example, Islamic State inspired, the fatalities and casualties would no doubt have been much greater. There is absolutely no connection to the events of last August at the Erawan Shrine; that incident was motivated by different logic.

The orientation of the campaign in Southern Thailand is Muslim nationalist separatism, but it is directed at the government – and is therefore by nature also political. In essence, it is the use of terrorism to deliver a political message to the government and the military and the Thai people.

Were the attacks connected to the referendum as the government implies? Arguably, yes – but not in the way that it is being interpreted at the moment.

The outcome of the referendum has been to essentially entrench the military’s role in politics, regardless of whether or not a future government is democratically elected. Further constitutional change to revoke this change is unlikely given that the military rewrote the constitution.

The Muslim separatists in the South have clearly been frustrated by the lack of movement, delays, and prevarication on peace negotiations since the military seized power two years ago. The insurgents see the situation potentially remaining stagnant and deadlocked. They carried out these attacks to send a political message about the military-backed constitutional referendum being passed.

So were the targets, devices, intelligence and preparations thrown together inside these few days since the referendum result? No, this is not how a coordinated attack of this magnitude is organized; it requires significant pre-planning and time. This plan was in the wings waiting for activation.

The selection of targets allowed several different messages to be conveyed. These messages fit extremely closely with the patterns of several of the Southern Thailand insurgent groups, while more broadly targeting the incredibly valuable and important tourism industry.

The tactics employed here need to be examined. Firstly, there was an obvious level of coordination behind the attacks, especially when factoring in the arson attacks and devices that were found two days earlier on Aug. 10 in Phuket.

What doesn’t correlate to this degree of input is the rudimentary low-tech devices employed. Why such effort at coordination with such low yielding devices, clearly not made for mass casualty attacks? Simple, it was sending a message.

That message was delivered through attacks on symbols of tourism – locations, with casualties and fatalities, but it could have been much worse. So, the question is, why was it not worse? Did a group that could organize multiple attacks across several days not have access to more powerful materials? Were they simply inept?

Doubtful. It is much more probable they chose to minimize the capacity and yield so as to put the message across without a level of carnage that would draw a significant push back.

They wanted to send a limited message to the government. This was a demonstration of capability (measured but evident), a clear indication of intent, and proof of geographical reach.

Were tourists the medium to deliver this message? By default, yes. However, the primary target was the tourism industry, a core revenue generator for the country. The geographical spread and timing reinforced this message.

What is most interesting though is the use of low-tech devices. Islamist terrorists would have used mass casualty explosives, while anti-government activists would have targeted government buildings and symbols more than tourism.

The targeting of police posts, police stations, a marine police station – these were incorporated into the attacks in order to convey the message directly to the military.

Arguably, the catalyst for these attacks was actually what the government has implied: the referendum. Yet, what is being blatantly misrepresented here is who may have been behind it. The military are using a catch-all terminology to describe the perpetrators as “anti- government.”

The South was overwhelmingly opposed to the referendum, but the very reason for being so opposed was what the government is seeking to casually brush under the debris of the past weekend: terrorist attacks.

These have been escalating in the southern provinces for the past eight months. In August alone, there was a significant further escalation to the point of five bombings a day on average. And that doesn’t include the use of weapons in shooting incidents.

The referendum was resolutely opposed in the South with ever increasing resentment against the military and the Thai state, and was always going to be rejected. The increase in the military’s power, the entrenchment of the military in the political arena regardless of future democratic developments, and the actual content of the constitution with a strong emphasis on the protection of Theravada Buddhism were among several key points of contention in the south.

Add to these the stalling of the peace negotiations, the prevarications of the military government, the intentionally unacceptable preconditions imposed, and the outcome is best described as intractable. In short, with the military drafting the constitution in the manner they did and boxing the insurgency leaders into a corner as they have, it has created a zero sum mindset and the brinkmanship conditions for an escalation of the southern insurgency.

Regardless of whether the government labels this as local agitators, local sabotage or “anti-government elements,‟ we are seeing the use of violence to intimidate, to coerce, to instill fear.

Terrorism is quite simply to terrorize. Random and targeted bombs terrorize – simple as that.

The message from the insurgents is ‘the government needs to start taking these peace talks seriously’. The military government’s decision to dress matters as they runs the serious risk of further, more deliberate and resounding messages being delivered.

This is the first real push out into the country proper that the Southern insurgents have executed. It is the largest coordinated spate of attacks outside the southern provinces in the history of the insurgency. It should be read as such and understood within the context of the message. The potential for growing political and security instability to spread further across the country is here and has just been highlighted to a broad audience in a very visible manner.