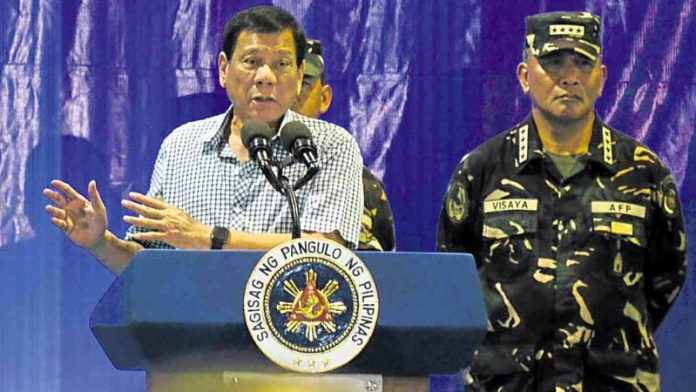 On Monday 28 November, an improvised explosive device (IED) was found in a trash bin near the US embassy in Manila.

Philippine National Police (PNP) officials said that around 6 a.m., a street sweeper found a suspicious-looking object, a gin bottle wrapped in black plastic with a cellphone and cables attached.

PNP Chief Ronald Dela Rosa then made a public statement saying that Maute group, the Islamist terrorist organization based in the Philippines’ southern island of Mindanao, could have planted the bomb so authorities would divert their attention from their hometown.

Approximately 24 hours later, it seems his instincts were unfortunately correct.

President Duterte’s security team was the alleged target of a bomb that exploded in Marawi City in Mindanao on Tuesday morning at 10:45am. Nine were reported injured following the blast, with one in critical condition.

The president had planned to fly to Mindanao to visit Marawi City on Wednesday 30 November. Members of Duterte’s convoy had arrived one day in advance, and were en route to the Marawi army headquarters when they were hit by the improvised explosive device (IED).

Soon after the incident, there were allegations that the attack on Duterte’s convoy Lanao del Sur was staged. Major Filemon Tan Jr., spokesman for Western Mindanao Command (Westmincom), denied that the military had orchestrated the ambush. “What would it benefit our soldiers to do that kind of scenario? We will not hurt our nine soldiers to do such drama and that’s ridiculous,” Tan said.

Former Philippine President Ferdinand Marcos declared martial law in 1972, which the country then remained under until 1981. Duterte has recently begun publicly flirting with bringing it back. On 12 November, while speaking about the “lawlessness” in Mindanao, Duterte said that he “might be forced to” suspend the writ of habeas corpus — which grants detainees the right to challenge the legality of their detention. Suspending the writ is commonly considered a precursor to declaring martial law.

Responsibility has yet to be claimed for the incidents on either Monday or Wednesdays.

Maute group was also blamed for the bombing in Duterte’s hometown of Davao in September that left 14 people dead.