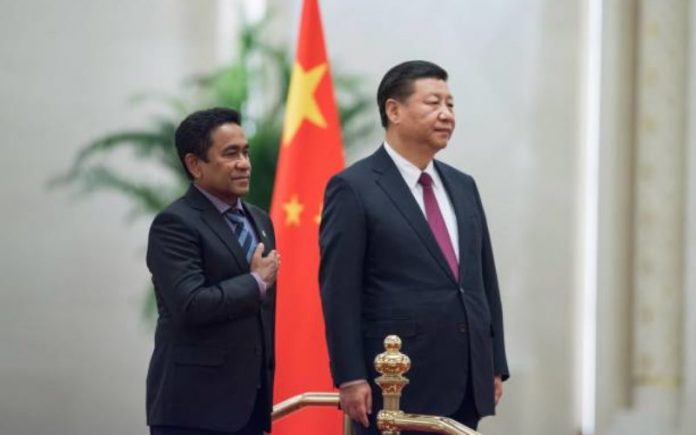 The growing political turmoil in the Maldives could become a major point of conflict between India and China, as the regional giants support opposite sides of a rapidly evolving political crisis.

At issue is a ruling of the Maldivian Supreme Court that reversed former President Mohamed Nasheed’s decision to strip 12 lawmakers off their seats. Current President Abdulla Yameen rejected the court’s decision and declared a state of emergency on 5 February.

A power struggle in the South Asian country of the Maldives, could set the stage for competition between India and China. During former President Mohamed Nasheed’s term, the Maldives aligned itself with India’s strategic interests through its “India First” policy.

Since Abdulla Yameen took power in 2012, the country has slowly moved into China’s strategic sphere of influence with a significant shift towards a new China-friendly policy.

In 2014, Chinese President Xi Jinping visited the archipelago and since then, Sino-Maldivian relations have only grown stronger. Chinese investments in the islands have funded an airport upgrade, land reclamation projects, resorts, roads and housing in the Maldives as part of an ambitious trade and infrastructure initiative.

The Maldives canceled its contracts with Indian company GMR and accepted a $373 million loan from Chinese Exim bank to upgrade the Male airport. China constructed the $210 million China-Maldives Friendship Bridge and completed housing project with over 7,000 homes. In addition, the Maldives leased an island close to the Male airport, Feydhoo Finolhu, to China for 50 years.

Last December, Yameen visited Beijing and signed a free-trade agreement that eliminated most tariffs on Maldivian exports, primarily fish, and opens the nation to Chinese goods and services, including finance, health care, and tourism.

Chinese infrastructure in the Maldives is of concern to India, who fear they may not only strengthen China’s economic presence but also lay the groundwork for Chinese military installations like naval bases, airfields, or observation posts.

Adding to growing Chinese control over Sri Lanka’s Hambantota Port and a new naval base in Djibouti, the Maldives have leased out several islands to China which could be used for military construction as part of the “string of pearls” strategy to encircle India and reduce its influence.

In response to the current crisis in the Maldives, Beijing has demonstrated its support for the Maldives’ current leadership and taken a strong stance against external involvement,stating “the international community shall play a constructive role on the basis of respecting the sovereignty of the Maldives, instead of further complicating the situation”.

The Maldivian opposition to the sitting president is counting on help from New Delhi. Following the request, by Nasheed and its Maldivian Democratic Party on military support, the Indian navy bolstered its regular patrols of the Indian Ocean. In addition, it deployed several smaller vessels from its southern military port of Kochi, which are now anchored about two and half hours away from the Maldivian capital of Male.

China’s economic and strategic interests in the Maldives under the Belt Road Initiative are likely to come under threat if the exiled Nasheed comes back into power. Nasheed has been a strong rallying point for opposition to Chinese influence, accusing the current president of opening up the floodgates to Chinese investments with little or no oversight and transparency.

Presently, China holds over 70% of the Maldives’ foreign debt and could use this as leverage in exchange for a lease or control over critical Maldivian infrastructure, as they did with the Hambantota Port in Sri Lanka.

The unfolding events have provided India with the opportunity to push back against what it perceives as an unacceptable intrusion by China in India’s backyard. Yameen’s suspension of democratic institutions has given India an opening to try to recapture its former influence over a much smaller neighbor.