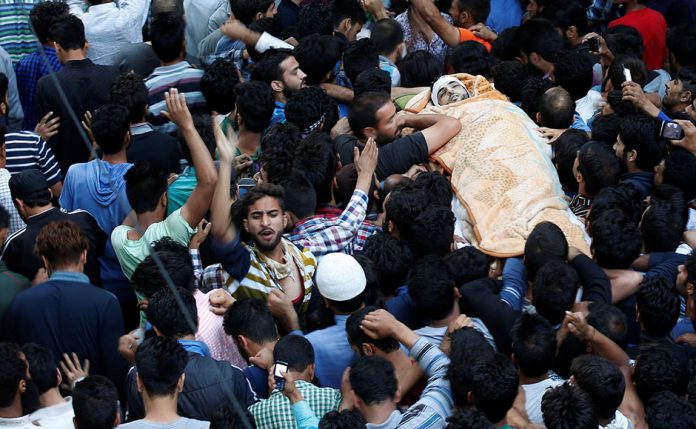 The death of Burhan Wani in the state of Kashmir has reignited a conflict which appears no closer to being resolved.

The death of Burhan Wani on July 8th, 2016 kicked off a new round of violent clashes in the disputed state of Kashmir, resulting in the death of 30 people: the latest flashpoint in a conflict dating back to 1947. The question of Kashmir has led to three wars, numerous other smaller conflicts, millions of deaths, refugees, and an overall sense of animosity between India and Pakistan. While the situation has not moved any closer to a solution in recent years, Kashmir’s different options have become more stark.

The trigger: the death of Burhan Wani

Wani was only 22 when he was killed in a gunfight with the Indian army: he had reportedly been a militant since the age of 15. Wani was a prominent figure in the separatist movement, due to his frequent use of social media to encourage other young Kashmiris to join the cause. His funeral was bereft of police and security figures to avoid a clash with the predictably hostile crowd. Even so police stations and military outposts were attacked, presumably in retaliation for his death, triggering further violence.

On the outset it seems that Wani has managed to inspire others to restart the struggle against India, and his death has merely motivated them to intensify the fight. Khurram Parvez, head of the Jammu Kashmir Coalition for Civil Society in Srinagar, reported that Wani had become a rebel after his brother was tortured in public. Since then Wani had gained recognition over the years, as shown by the fiercely contrasting ways in which he has been labelled; ranging from liberator to militant. As with any separatist based civil conflict, opinions are strong and it is unclear who is right or wrong. What is clear, however, is that Wani’s death and subsequent violence has put attention back on Kashmir.

The first option is for Kashmir to formally become part of India. While India has always stressed that the state is part of the country, Kashmir has always been split in two between Indian and Pakistani administered Kashmir. However, in recent years this option has become probably less likely given the election of the right wing Hindu nationalist Bharatiya Janata Party (BJP).

As India’s only Muslim majority state it is unlikely the people of Kashmir will want to become part of a country which is run by a party whose relationship with Indian Muslims has been mixed. Similarly, the decision by the People’s Democratic Party (PDP) to form a coalition with the BJP has received a mixed reception, thus further decreasing the likelihood Indian inclusion. Despite this, there is overall no clear evidence available to show whether the people of Kashmir want to be part of India or not.

This second option is on the surface a more feasible option due to Kashmir’s Muslim majority. Pakistani controlled Kashmir is also known as Azad Kashmir which when translated from Urdu means ‘free Kashmir’. This is an indication of how at least some of those who live in this region of Kashmir consider themselves free from ‘the oppression of Indian [read Hindu] rule’.

In reality the situation is a lot more complicated than that and there is no real consensus on how Kashmiris want their country to be governed or by whom. Furthermore, becoming part of Pakistan may not necessarily be in the best interests of the Muslim population even though it would result in being part of a Muslim state. Pakistan is far from a united country, and the domination of the Punjabi ethnic group (which makes up around 60% of the population and controls the military) over the rest of the country makes one wonder what sort of treatment the people of Kashmir would receive under official Pakistani rule. Being tied to a country which has many internal economic, political, social and security issues could do more damage than good.

Another option is an independent Kashmir. While, if successful, that would lead to a solution to the conflict without directly involving Pakistan and India, at least initially, it could leave the new country isolated. Being a landlocked mountainous valley which, for much of the year is covered in snow, it would have to rely on good relations with its neighbors to have access to the outside world and support its economy. On the other hand, there is the possible option to live off the land in a simple life away from outside interference, but how viable this is in the 21st century is unclear.

Overall the only thing that is clear is that the future is unclear. The Kashmir issue has long been debated and fought over and has simply become more difficult the longer it has persisted. Said issue is also highly significant for the region as a whole as Kashmir has been the biggest barrier to Indo-Pakistani cooperation. It has been a constant drain on resources for both countries, diverting attention away from other issues and preventing them from developing their economies and attracting investment.

Therefore, resolving the situation would be of huge political and economic benefit to all involved.

This article was written by Rayhan Chouglay, and originally published by Global Risk Insights.

Under the Radar: Death of Burhan Wani stokes new violence in Kashmir

Pakistan: Who is Imran Khan and What Can Investors Expect from the PTI?