This is post 3 of 3 in the series “Sunac China- Dalian Wanda Deal; Good for the Stock but What About Leverage?”

Sunac China stock up 222% over the past year; highest among its peers

News of the Sunac China – Dalian Wanda deal lifted Sunac China’s Hong Kong-listed stock (HKEX: 1918) up 13.65% in trading on July 11. Over the past 1 year (as of July 11), the stock has delivered the highest returns among its peers; a whopping 222% to be precise. Over the last 6 months, the stock has delivered the second highest returns, equivalent to 135%, second to China Evergrande Group’s (HKEX: 3333) 197%. In YTD, Sunac China leads all others with a 167% return, except for China Evergrande once again, which is up 221%.

Sunac China is highly levered, with debt at 76 times book

However, one must keep in mind that Sunac China is not only a leader in price. Its debt levels are also the highest among its Chinese (FXP) (CHAD) peers. The chart above depicts the various leverage levels among Chinese real estate firms as indicated by their total debt-to-book capital ratio. Sunac China leads the 22 real estate companies in China (FXI) (YINN) in total debt-to-book capital with total debt standing at 76.13 times book capital. Now, with the acquisition of the Dalian Wanda assets, leverage for the firm could increase further as the company is to assume all debt associated with the hotels, theme parks and allied property included in the $9.3 billion Dalian Wanda Group (DWNDF) (SSE: 0489737D) deal. 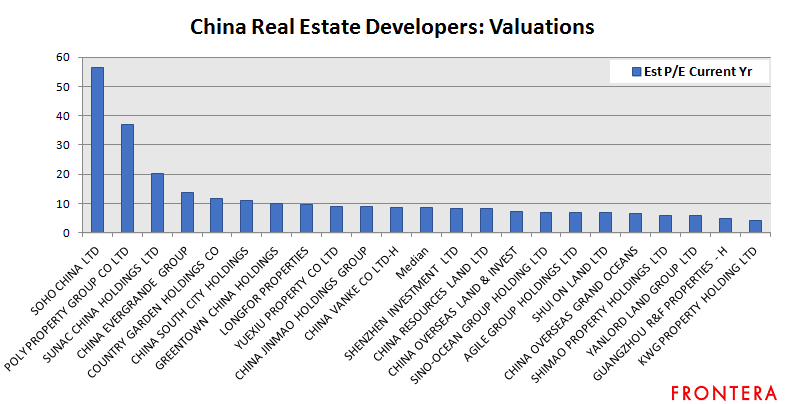 Expensive as compared to peers

On the valuations front, Sunac China is expensive as compared to most of its peers (see chart above). Its stock currently trades at an estimated current-year P/E of 20.2, high above the peer median of 8.5, and the 3rd highest among its peers. Furthermore, dividend yield of the stock is 3rd lowest among the group at a meager 1.65%.

While financials do not paint a very rosy picture for Sunac China Holdings from a leverage perspective, the company’s chairman, Sun Hongbin insists that the company is financially healthy. Based upon his recent comments to Caixin, the group has enough cash (more than $13.2 billion as of June 30) to fund the acquisition from Dalian Wanda. However, markets are concerned with the consequent increase in leverage as a result of the Dalian Wanda properties.

Read, 5 Of China’s Biggest Foreign Asset Purchasers Currently In the Crosshairs of the Chinese Regulator

This is post 3 of 3 in the series “Sunac China- Dalian Wanda Deal; Good for the Stock but What About Leverage?”