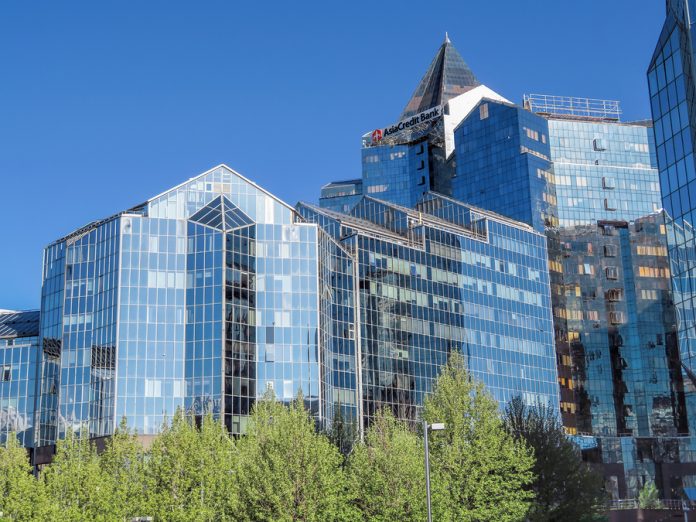 A cross-the-board look at Kazakhstan’s economic turnaround in 2017 and beyond as the country powers ahead with its ambitious reform agenda.

On January 30th, Kazakh President Nursultan Nazarbayev announced the ‘Third Modernization for Kazakhstan’ – a series of priorities which help form the ‘Kazakhstan 2050’ vision. The aging Nazarbayev is seeking to lay the foundations of sustainable and long term growth, with the country aiming to join the 30 most developed economies by 2050. Alongside political reforms, including changes adopted in March to increase the powers of parliament, the main emphasis has been on the creation of a new economic paradigm for Kazakhstan.

The government has emphasized the importance of national and regional identities as well as the preservation of local culture, yet has poignantly noted that the country will need to move past those cultural legacies which hold it back. One of the elements to be left behind is the cyrillic alphabet, with the government having assembled a working group tasked with creating a unified romanization of the Kazakh language by the end of 2017. The government plans to complete the transition to a Latin alphabet by 2025. In doing so, Kazakhstan joins other former-soviet territories such as Moldova, Turkmenistan, Armenia and Uzbekistan who have made similar switches.

The switch is being touted as a means to simplify international business dealings and ensure greater regional cohesion, with Kazakhstan stating that it is drawing on the experiences of Uzbekistan and Azerbaijan. The switch also highlights the continuing erosion of Russian soft power in the region, as Chinese (which itself uses a pinyin alphabet to aid international cooperation) and European investment and influence grows.

Switching the alphabet not only makes Kazakhstan more cosmopolitan, it also highlights the changing language that Kazakhstan is using to describe itself and its ambitions. A change in language reflects a change in narrative, particularly the economic switch from oil and mining to a more diversified and value-added economy. Here lies the crux of Kazakhstan’s efforts; shaken by the 2014 oil plunge and lower overall commodity prices, Astana seeks to prevent Kazakhstan again falling into the resource curse that hampers many developing and developed nations alike.

Recovering from the slump

With an expected average growth rate of around 3% for 2017-2019, Kazakhstan is slowly emerging from the oil and commodity price crash, one that saw GDP growth rates fall from double digit highs in the 2000s to an anemic trickle in recent years. Going forward, “Kazakhstan will need to complete the macroeconomic adjustment to the ‘new normal’ – addressing the legacy of financial sector issues and fostering the development of a more dynamic, export-oriented and productive private sector,” notes the World Bank.

With regards to these financial sector problems, Kazakhstan still faces more than $11 billion in problematic credit, with the government budget deficit rising to 7.7% in 2017 compared to 5% in 2016. A substantial portion of this increase is due to the ongoing recapitalization of Kazkommertsbank, the country’s largest lender. Overall, this restructuring will result in a one-off cost of 4.2% of GDP to the national budget. Another thorn in Kazakhstan’s side is the ongoing series of scandals involving the state pension fund, which announced it lost $224 million on investments in Azerbaijan’s doomed IBA. This comes after several senior executives were arrested in December on embezzlement charges. 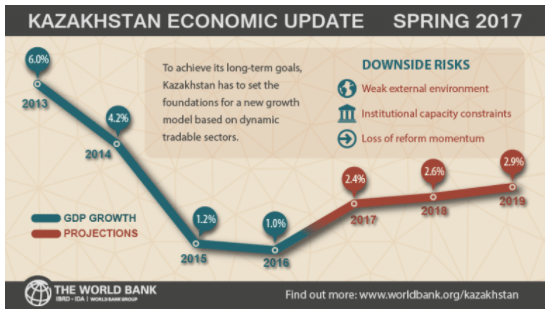 Despite this, Fitch has maintained its BBB rating with stable outlook, a vote of confidence in the government, as a narrower budget deficit is expected for 2018-2019 with the end of existing stimulus packages and a planned tax code reform. Moreover, despite the increasing budget deficit, total government debt remains very low, at 22.3% of GDP at the end of 2016.

Nevertheless, rating agencies continue to express concern about Kazakhstan’s financial sector, which received a B from Fitch as restructuring continues. Another concern is the state of Kazakh utilities, most of which face high exposure to foreign-currency risks and potential challenges in refinancing maturing debt. Furthermore, the relative lack of access to capital versus Russian and European firms continues to hamper the performance of Kazakh utilities.

While Kazakhstan and international institutions such as the World Bank have all expressed the need for diversified growth, the energy sector will continue to play a prominent role. Having decided not to cooperate with OPEC-led production cuts, Kazakhstan has benefited from increased production and stabilizing prices in 2017. Furthermore, Kazakhstan is planning a substantial increase in transport capacity and production levels for the Kashgan and Tengiz fields and Trans Caspian Pipeline. This will aid plans by the Trans-Caspian Consortium, of which Kazakhstan is the second largest shareholder, to increase exports to 65 million tons (or 1.3 million bpd) in 2017, up from 44.28 million tons in 2016.

At the same time that Kazakhstan is planning these increases it will also be hosting Expo 2017 from June 10th to September 10th. The expo’s theme is ‘Future Energy’ and will see Kazakhstan showcase its efforts to diversify its energy sector and the wider economy. One plan is to provide a fleet of all-electric taxis for the event produced by Kazakhstan’s largest automotive manufacturer Allur Group, in partnership with China’s JAC Motors. The 1,200 worker factory in Kostanay is one of many joint ventures with China, as Kazakhstan’s ‘Bright Road’ vision and China’s ‘One Belt, One Road’ (OBOR) plans mesh together. Other joint ventures include plans with China’s SANY to build a 100MW wind farm, with the possibility for future expansion: Kazakhstan is aiming for an ambitious 50% renewables by 2025. Air China will also launch a direct Beijing-Astana route on June 1st ahead of Expo 2017.

Alongside energy, Kazakhstan’s first modern oil processing plant, the Aktau asphalt plant run by Kazmunaygas and China’s CITIC Group has allowed Kazakhstan to become a net exporter of bitumen, compared to 2014 when 90% of the country’s bitumen was imported. Furthermore, COSCO Shipping and Jiangsu Lianyungang Port Co. will buy a 49% stake in a Kazakh inland port near the Xinjiang border as year-on-year Europe-China container traffic traveling through Kazakhstan three fold in Q1 2017. Another Sino-Kazakh joint venture, Kelun-Kazpharm, has become the largest drug producer in Central Asia, supplying 90% of the country’s medical infusion market since it began operating in 2014.

Despite these results, not everything has proceeded as planned, as the Horgos special economic zone demonstrates. Launched with much fanfare in 2011, and incorporated into OBOR in 2013 with the goal of hosting financial services, high tech and biomedical companies, the site remains largely underused. Unequal investment and concerns about cheap Chinese goods highlights the disproportionate bilateral relationship. China has sunk $1.69 billion into their side of the complex, which in turn dwarfs the Kazakh half, with much of the activity comprised simply of locals buying basic goods in the zone to circumvent taxes. Moreover, fears of cheap Chinese imports have seen Kazakh authorities limit duty-free goods to $1,680 per person per day.

Beyond its relationship with China, Kazakhstan’s position is summed up by Giovanni Capannelli, Kazakhstan country director at the Asian Development Bank.

“Kazakhstan is a relatively small market of 17 million. But if you think that you can serve the market of the Eurasian Economic Union, the proposition to invest in Kazakhstan becomes more interesting […] In economic development, Kazakhstan is certainly a [regional] leader. But if you look at SME competitiveness, Kazakhstan may be falling behind other countries in the region. I would say, for example, that the Kyrgyz and Uzbeks have SMEs which are more competitive than SMEs in Kazakhstan in a number of sectors.”

With only 25% of Central Asia’s population, Kazakhstan over-performs by accounting for more than 60% of regional GDP. These trends have been driven by energy investment and state controlled enterprises, so Capannelli’s concerns about Kazakh SMEs highlight challenges for the country going forward if it wants to maintain its leadership position, especially since Uzbekistan sports double the population of Kazakhstan. 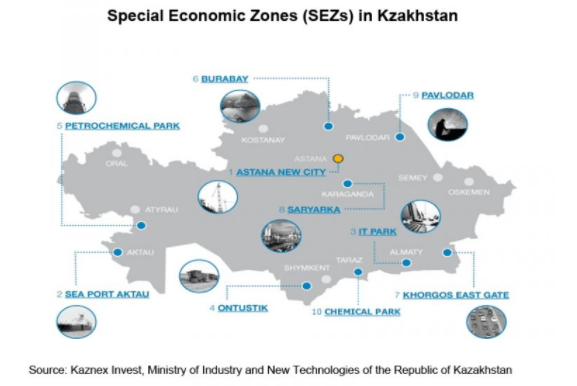 To this end, Kazakhstan has made significant efforts to entice foreign investment with a mixture of appealing tax breaks. Various firms from Europe and beyond have taken advantage of the country’s ten special economic zones touting decade-long exemptions from most major taxes and 42 regional industrial zones promoting SMEs. In 2016, Kazakhstan’s ease of doing business ranking reached 35th and total FDI between 2007 and 2017 hit $327 billion.

For investments of $13 million or more in government designated priority industries, Kazakhstan is offering ten year exemptions from corporate and land taxes, an eight year exemption from property tax and up to 30% cash-back on capital expenditure. By stoking the private sector in such a manner, Kazakhstan is augmenting its larger strategy of systematic privatization, specifically plans to transition the economy from 70% to 15% state control. Recently, the government has announced that the Aktau sea port as well as several regional airports will be privatized by the end of 2017. The privatization scheme also includes Air Astana, KazPost, the national railway; and atomic, shipping and energy companies, including an IPO of Kazmunaygas – responsible for a third of national oil production – by 2020.

Changing alphabets, empowering parliament, fostering SMEs, mass privatization and strengthening international ties all point to the seriousness with which Kazakhstan is reforming itself. The country needs to remain committed and not fall back into familiar – but ultimately dysfunctional – economic models should the road ahead prove bumpier than expected.

Does the ‘New’ Kazakhstan Signal a Genuine Fear of Uprising?