With every missile test conducted by North Korea – the latest being on September 15 – tempers in the global community, especially in the US, are flaring.

Frustrations regarding North Korea are mounting in the US administration given the arrogance Pyongyang has shown in face of global behemoths like US and Japan.

Since sanctions and other methods of direct pressure have not had the desired effect, the US administration, led by President Donald Trump, has threatened to sever trade ties with all nations which do business with North Korea as an indirect measure.

By doing this, the US not only puts external pressure on North Korea, but it also brings the trade protectionism rhetoric firmly back on the table.

China in crosshairs as others drop out

When the US says it’ll stop doing business with all countries trading with North Korea, it essentially means China. With 90% of North Korea’s external trade flowing through the Asian major, there’s little reason to look elsewhere. 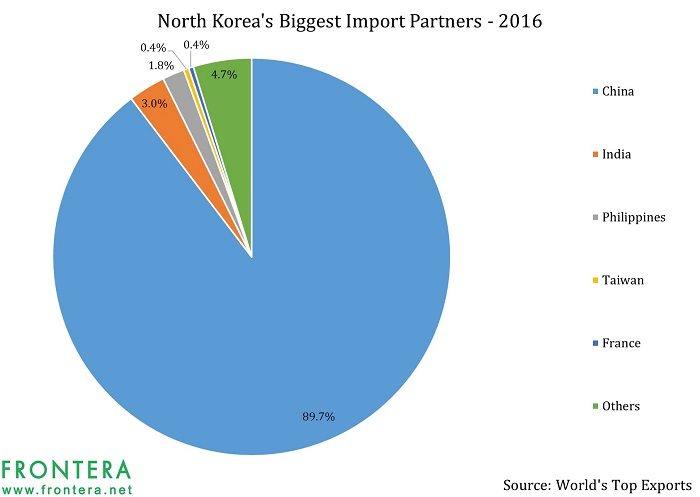 This becomes even more prominent when one takes into account examples such as India. The country was a distant second largest export destination for North Korea in 2015, according to MIT’s Observatory of Economic Complexity. However, India has reduced trade substantially with the nation since then.

According to data provided by the Department of Commerce, India’s exports to the nation had stood at $111 million in FY 2015-16 (Apr-Mar). This came down sharply to $45 million in FY 2016-17. Further, in April of this year, India banned the majority of trade with North Korea, with the exception of food and medicine, thus taking another major trading nation out off the radar and leaving China in the limelight.

Killing two birds with one stone?

Long before North Korea took center stage in the global political spectrum, then Presidential candidate Trump had expressed strong views against China in terms of its trade imbalance with the US and accused the nation of currency manipulation.

After taking office, meetings with the Chinese leadership lead to a marked softening of this stance. However, the constant North Korean missile tests even after United Nations sanctions, and admonishment by major countries from around the world, has brought the trade rhetoric by the US back to the table, albeit in an indirect manner.

Given China’s close association with North Korea, the US has resurfaced talk of the trade embargo at a time when fears of various global trade wars are also increasing.

In this manner, the US administration is intending to kill two birds with one stone: getting China to put pressure on North Korea and leaning on China itself by bringing trade deficit talk back on the table and thus aiming to fulfill one of its campaign promises.

The US is further stoking an already flared trade situation with China as North Korea seems to be no longer listening to its biggest benefactor: China. In the next article, let’s look at how North Korea may continue to do well despite trade sanctions placed on it.